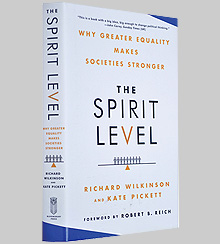 In The Spirit Level, English social scientists Richard Wilkinson and Kate Pickett make a comprehensive case, supported by statistical evidence, that the root cause of the majority of society’s health and welfare problems is social inequality — the degree of differences in income, and thus status, between the richest and the poorest citizens in the land. They conclude that social metrics cannot be improved using piecemeal efforts that target specific problems; improvement requires comprehensive policies designed to reduce inequality. The evidence supporting the insidious effect of social inequality is laid out with forensic skill, and the correlations are quite astonishing.

The levels of trust that people have in each other in more egalitarian countries, such as Sweden, Norway, Finland, and Japan, are twice as high as they are in more unequal countries, such as the U.S., Portugal, and Singapore; similar results appear when U.S. states are compared with one another. Mental illness, drug abuse, life expectancy, homicide rates, obesity, school dropout rates, incarceration, and recidivism — the evidentiary bell tolls like a prosecutor’s indictment — all show similar correlations.

The causal dynamics proposed by the authors run something like this: People in unequal societies are insecure about their status. They engage in all kinds of dysfunctional behavior to counter this pervasive sense of inferiority: having babies young and out of wedlock; eating fast food; taking drugs; asserting their status through violence; and, in the dysfunction’s most benign manifestation, consuming goods at a much higher rate than people in egalitarian societies. Some of the effects of low status may even be hardwired into our physiology, with mothers in socially deprived circumstances delivering premature, underweight babies, whose subsequent health problems boost infant mortality statistics. More generally, it seems, those who live in unequal societies pursue quantity, whereas those in more egalitarian countries focus on quality.

The authors’ recommendations of what should be done to remedy inequality are provocative, but not nearly as persuasive as their data. They suggest that taxation policies that level disparate pre-tax incomes and social policies that discourage large income disparities in the first place are equally effective. More radically, they claim that wealthy countries have reached the limits of what economic growth can do for their welfare and that no-growth polices are feasible and sustainable. Such ideas are likely to encounter knee-jerk rejection in many quarters, but the incontrovertible evidence of the close correlation between inequality and social malaise will not go away. We may not agree with the solutions, but we can’t deny the problem.