Title: Knowing Others’ Preferences Degrades the Quality of Group Decisions (Subscription or fee required.)
Authors: Andreas Mojzisch and Stefan Schulz-Hardt (both affiliated with Georg-August-University)
Publisher: Journal of Personality and Social Psychology, vol. 98, no.5
Date Published: May 2010 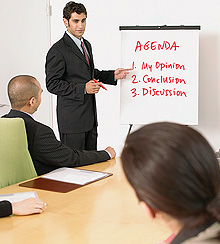 What could be worse than a business meeting where participants ignore the right information and make the wrong decision? Recent research reveals a simple way to reduce the chances of this unfortunate outcome. Several studies have shown that when groups fail to arrive at decisions, it’s often because they devote too much time to finding common ground rather than weighing the pros and cons of what each person is saying. Building on that notion, this paper finds that meetings are especially ineffective when attendees begin by disclosing which way they are leaning; upon voicing an opinion about a decision, people are more likely to ignore information that others introduce, even if it could potentially change their opinion or contribute to a better decision.

The authors simulated a meeting environment by inviting participants to play the role of a member of an airline hiring committee that was choosing a single pilot from among four candidates. In one set of experiments, the subjects received individual pamphlets containing partial and different information about each of the candidates. They were then split into groups. In some groups, members immediately told each other their selection; in others, they kept their choices to themselves. The groups were then handed complete dossiers on the pilot candidates, at which point it became obvious who the best person for the job was. Despite this, people in the groups that had initially shared their preferences based on the incomplete data mainly stuck to their original choices and remembered little about the information presented at their meetings, suggesting they had failed to pay much attention to details introduced after they voiced their opinions. By contrast, the groups that had been closemouthed about their favorite candidates more readily identified the best person for the job.

According to the authors, 90 percent of group discussions begin with the members disclosing their pre-meeting biases. Considering the results of their research, the authors advise managers to reduce the number of distractions that may impede group members from processing new information and to ask participants to hold their opinions until the end of a meeting.

Bottom Line: Individuals fail to process information introduced by others during meetings after their own preferences have been voiced, which hinders optimal decision making.