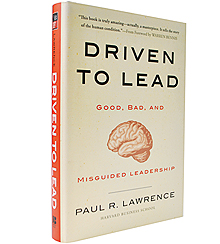 The overly ambitious objective of Driven to Lead: Good, Bad, and Misguided Leadership is no less than the synthesis of the multiple theories of human behavior under the umbrella of what Paul R. Lawrence, the Wallace Brett Donham Professor of Organizational Behavior Emeritus at Harvard Business School, calls Renewed Darwinian (RD) theory. Supported by the most recent work on neurophysiology, Lawrence declares that leadership, which is essentially a kind of decision making, is as natural to human beings as flying is to birds. Although the potential for bad leadership is part of the human condition, he argues that given this new perspective, together with tests to detect the potential for bad leadership, we need no longer tolerate such leadership in practice.

At the heart of RD theory is Lawrence’s theory of drives, developed with Nitin Nohria (now dean of Harvard Business School) and described in Lawrence and Nohria’s book Driven: How Human Nature Shapes Our Choices (Jossey-Bass, 2002). The theory of drives and the evolutionary brain biology on which it depends form the first of three parts of Lawrence’s new book. It suggests that there are four independent, unconscious drives that constitute the human survival mechanism: the drive to acquire resources, to defend ourselves, to bond with other people, and to make sense of the world around us. We share the first two with all animal species; the last two are unique to humans, and their presence vastly expands the scope and meaning of the first two by allowing their play in broad contexts. All these drives operate by using emotions as lobbying devices to get the attention of the conscious mind. The resulting impulses are checked, balanced, and ultimately integrated in the region of the brain known as the prefrontal cortex.

In the second part of the book, Lawrence begins to explore patterns of leadership drawn from history and the consequences of the existence of so-called free riders, psychopathic people who lack the drive to bond. His examples include political leaders, such as Napoleon and Stalin, and business leaders, such as Jay Gould, the 19th-century robber baron. He calls them “people-w/o-conscience,” and after citing some evidence, concludes controversially that their psychopathy is genetic and not subject to significant alteration through nurture and socialization. In leadership positions in the past, he contends, these “immoral” people have wreaked havoc by fulfilling their drives to acquire resources by any means possible and without regard for others. Given what we now know about the structure of the brain, Lawrence argues, we should be able to turn what has been seen as a moral issue into a scientific proposition. From this perspective, he calls out the presence of people-w/o-conscience in positions of leadership as a “massive public health problem.”

In the third section of the book, Lawrence continues applying RD theory to big issues, such as how to design corporate structures that encourage good/moral corporate behavior in the banking sector and the global economy, via widespread reform of societies’ institutions and a world governance system. He even suggests that the effectiveness of business schools could be improved by the teaching of RD theory as a framework for analyzing cases. The book concludes with an urgent appeal for research on RD theory, and especially on his contention that psychopathy is genetic and on the implications that such a discovery might have for public policy.

Lawrence is a distinguished management academic, and his provocative book is highly critical of the economic frameworks that have dominated management thinking in recent times. But like many academics, he seems to assume that new ideas can be substituted for old without changing people’s habits — what early-20th-century management writer Mary Parker Follett called their “action tendencies.” She wrote: “As this cannot be done, revolution after revolution fails.”

Many readers will be uncomfortable with the speculative second half of the book, which has the feel of a young horse being set by its rider at some high fences. The risks of damage to both the horse and its rider are considerable, which is a pity given the potential of the horse and the esteem in which its rider is held.

Topics: academics, brain, governance, writers, leadership
Get s+b's award-winning newsletter delivered to your inbox. Sign up No, thanks