Standing on the Sun: How the Explosion of Capitalism Abroad Will Change Business Everywhere 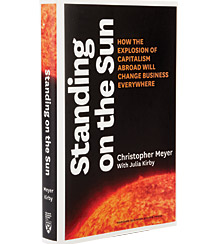 In the 14th century, astronomers were resolute in their conviction that the sun revolved around the earth, even as they saw celestial relationships that challenged their view through more powerful telescopes. To offer a different perspective, Nicolaus Copernicus had to metaphorically stand on the sun.

By analogy, Christopher Meyer, the founder of Monitor Talent, argues in his book, Standing on the Sun: How the Explosion of Capitalism Abroad Will Change Business Everywhere, with Julia Kirby, editor-at-large for Harvard Business Review, that capitalists in developed economies are too resolute in their belief that capitalism revolves solely around the profit motive. Stuck in their economic world view, they’re missing evidence from around the world about capitalism’s evolution — such as the rise of alternative business models that accept a lower return on financial capital to achieve a higher return for society. From his perch on the sun, Meyer advocates open minds: “Like any ‘ism,’ capitalism is a social construct; capitalism is only a term for what capitalists tend to believe and do. Beyond a few fundamentals — that it puts faith in the markets as the best way to allocate resources, that it depends on private ownership of property, that it features mechanisms for accumulating capital to fund endeavors larger than individuals can undertake alone — very little about it is set in stone.”

Meyer contends that a new version of capitalism is arising in economies “least invested in the status quo” and most severely affected by the scourge of underdevelopment. Countries casting off the yoke of colonialism and defining 21st-century industrialization, he says, have become the world’s R&D lab for socially motivated business innovation and sustainable development.

To prove the point, the peripatetic Meyer shares his encounters with capitalist innovators in such places as Mumbai and Sao Paulo. In Mumbai, we meet Sweta Mangal, a social entrepreneur who cofounded Dial 1298 for Ambulance, India’s first private ambulance service. “While I was working in the U.S., I thought…everything worked like magic. I’m a person from a country where nothing works,” she says. “That’s what got me thinking: maybe I can do something better in India.”

Mangal’s contribution is a for-profit/nonprofit hybrid social enterprise. The foundation arm buys ambulances (using donations), then charges the for-profit arm by the hour to use them. This approach frees the for-profit organization from having to raise the capital to buy the fleet of ambulances and plays to its strengths in running the operation. As a result, Dial 1298 is able to charge patients less than the taxi fare they would otherwise pay to get to the hospital.

In Brazil, the author points to Natura, a US$2.3 billion cosmetics multinational, for its inventive use of natural ingredients and its sustainable sourcing practices. Natura practices “triple bottom line” accounting, also known by the phrase people, planet, and profits. For example, even though the company’s Avon-style network of sales reps has an annual turnover rate of more than 30 percent, Natura doesn’t offer incentives to reduce turnover. Instead, it absorbs the cost in order to contribute more skilled and self-reliant workers to the general population.

As you might expect from Meyer, a veteran trend-spotter and leader of conversations about the future of business (his 1998 book with Stan Davis, Blur: The Speed of Change in the Connected Economy [Addison-Wesley], prepped executives for the full-throttle digital age), Standing on the Sun offers a mash-up of provocative ideas, observations, and predictions. For instance, after noting the maturation of the first digital-native generation in developing countries, he cites the brilliance of the young Kenyan entrepreneurs who created the Ushahidi platform, which uses cell phone data to construct real-time maps of unfolding crises, and predicts that digital information access and transparency will accelerate the movement to reform financial accounting globally.

The book creatively ties other mega-trends, such as demographic shifts and advances in technology, to the evolution of capitalism, but the mash-up also leads to digressions and a disjointed narrative. And Meyer’s fondness for metaphors from evolutionary biology and complexity theory can try the reader’s patience. An elaborate lesson in the evolutionary biology of a peacock isn’t needed to make the point that pursuing return on equity at the expense of innovation weakens capitalism. I would rather have read more about digital natives in developing countries or the views of Princeton University professor Anne-Marie Slaughter on how the Internet will make the World Bank more effective. Still, if you approach Standing on the Sun as a seeker, looking for clues to what the future might hold, the book provides a lot of fresh ideas to consider.

Topics: economy, innovators, internet, research and development, turnover
Get s+b's award-winning newsletter delivered to your inbox. Sign up No, thanks