The Innovator’s DNA: Mastering the Five Skills of Disruptive Innovators 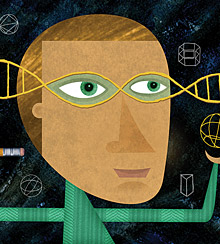 In The Innovator’s DNA: Mastering the Five Skills of Disruptive Innovators, a trio of professors — Jeff Dyer of Brigham Young University’s Marriott School, Hal Gregersen of INSEAD, and Clayton M. Christensen of Harvard Business School — outline the skills of innovative entrepreneurs and suggest how individuals, teams, and organizations can learn them and promote their use. The result, they write, is a “pocket-sized map…to your innovation journey.”

The five skills, all of which have to be present together, are associating (linking ideas that aren’t obviously related), questioning, observing, networking, and experimenting. The first is a thinking skill and the others are behavioral skills. The authors stress the behavioral aspects of innovative entrepreneurship, saying that usually, innovators act differently in order to think differently. Despite the DNA metaphor in the title, these skills are not genetic; they can be learned. The authors intend the DNA image to conjure up the complex, dynamic relationship among the four behavioral skills, similar to that among the four chemical bases that make up DNA. 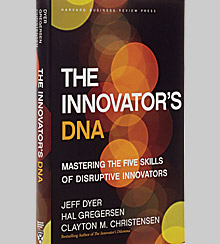 There are some barriers to developing this DNA. The trio believe that the ability to innovate usually has its origin in the entrepreneur’s profound dissatisfaction with the status quo, which is likely the result of early life experiences. Innovative ability thus cannot be easily acquired. Further, the five skills concern the discovery of value as opposed to its delivery, which is usually taught in business schools and rewarded by many organizations. This, the authors say, is the primary reason so many large companies fail at disruptive innovation: People with discovery skills have been driven away. But how such skills can be promoted in the normal delivery-driven company is unclear.

With the innovator’s DNA defined, the authors turn their attention to how organizations and teams can build their discovery skills. They identify a list of the world’s “most innovative” companies by calculating the net present value of each company’s cash flows from its existing businesses, and comparing that figure to its market capitalization. When the market cap is the higher of the two numbers, an “innovation premium” exists: the market believes that the company will generate additional growth through some form of innovation. Salesforce.com Inc., a cloud-based sales software provider, tops the list of companies with innovation premiums, followed by Intuitive Surgical Inc., which makes surgical robots. Apple and Google are fifth and sixth, respectively, on the list.

The book details the innovation DNA of these organizations using a framework of people, processes, and philosophies. These firms hire innovative people, put processes in place to support individuals in their discovery journey, and embrace four guiding philosophies:

• Make it clear that innovation is everyone’s job

• Take lots of smart risks in the pursuit of innovation

Implicit in these philosophies is an acceptance — even an embrace — of failure in the cause of learning. To realize them in practice, people must have the space and time to innovate, and the innovation priorities must be clear. Google, for instance, famously allocates the engineering time in its innovation portfolio as follows: 70 percent to derivative innovation, 20 percent to platform innovation, and 10 percent to disruptive innovation.

At the team level, the authors cite the benefits of having members with complementary skills and note the important role that trust plays in performance. They also highlight the role of process, suggesting that processes that mirror the discovery skills can transform “B” players into topnotch innovators, while processes that undercut them can crush even the most innovative individuals.

The research on which this book is based began its published life as an article in an academic journal in 2008 and then appeared as a popular article in the Harvard Business Review in 2009. In its exploration of the contextual challenges to innovation, the book represents a worthwhile expansion of those articles.