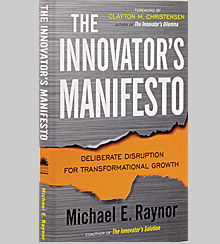 Michael E. Raynor, who collaborated with Clayton Christensen on the development of the theory of disruptive innovation, extends its use to predict the future, better understand the past, and prosper in the present in his new book, The Innovator’s Manifesto: Deliberate Disruption for Transformational Growth. In doing so, he seeks a wider audience for disruption theory, by showing how entrepreneurs can use it to shape their ideas and strategy, managers can use it to identify or create new opportunities, and merger and acquisition specialists can use it to pinpoint targets. Curiously, one audience he does not specifically identify is management professors, a group for whom his rather academic prose seems particularly appropriate and, in some ways, to whom the book seems directed.

The core of Raynor’s case for the predictive power of disruption theory is a study of Intel’s New Business Initiatives (NBI) group, whose job it is to investigate opportunities far afield from the company’s current operations. In this study, disruption theory proves to be a better predictor of new venture success and failure than other theories. This conclusion was confirmed in a follow-up study in which MBA students were given business plans drawn from venture capitalist pitch decks and asked to use different theories to predict what happened to the companies. Once again, disruption theory proved to be the best predictor of future success.

Raynor shifts from prediction to explanation by showing how the success of Southwest Airlines is better explained by disruption than by the “low-cost carrier” thesis derived from Michael Porter’s work. Southwest, suggests Raynor, pioneered a new frontier, using an “enabling technology” that powered a new business model, as opposed to simply repositioning itself on the cost–value curve. Incumbent airlines were unable to respond because although they could change their strategies, they could not change their business models.

Disruption theory says that an enabling technology is the key difference between a truly disruptive innovation and a mere niche solution, such as a low-cost strategy. The Holiday Inn and Four Seasons hotel chains, for example, are niche strategists, or “pseudo-disruptors,” because they identified specific trade-offs that travelers are willing to make, but did not develop enabling technologies. The growth prospects of pseudo-disruptors are much more modest than those of disruptors, such as Walmart, which developed a unique distribution technology that retailers like Kmart and Sears could not match.

Raynor illustrates the application of disruption theory in the here and now with the interesting example of Sedasys, a computer-controlled medical system for sedating patients developed by Johnson & Johnson (J&J) that can improve recovery times and practitioner productivity. The Sedasys development team deliberately pursued disruptive innovation by targeting gastrointestinal procedures, but found it difficult to displace the anesthesia professionals already working in that area. So instead, they succeeded by focusing on market subsegments in which such professionals were not established.

The J&J example serves as a helpful reminder that innovations rarely spring forth fully formed: The development process and experience can have an important impact on the outcomes. As Raynor suggests, using experience and thought informed by disruption theory is a promising way to make your own luck.

Topics: technology, innovation, strategy, academics, leadership
Get s+b's award-winning newsletter delivered to your inbox. Sign up No, thanks