Once upon a Car: The Fall and Resurrection of America’s Big Three Automakers — GM, Ford, and Chrysler 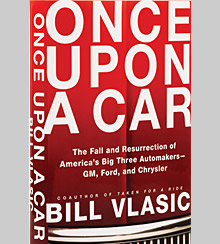 If you like your management lessons in narrative form rather than paradigmatic frameworks, you’ll love Once upon a Car: The Fall and Resurrection of America’s Big Three Automakers — GM, Ford, and Chrysler. In it, Bill Vlasic, the Detroit bureau chief for the New York Times, does a masterful job of weaving together the recent travails of America’s battered auto industry. Using extensive interviews with the major players, he serves up a fly-on-the-wall recounting of what happened in the corridors of power, while affording the reader an appreciation of the profound systemic problems that plagued these companies.

Vlasic begins the tale in early 2005 at the Detroit Auto Show with the different agendas of the Big Three CEOs. Ford has lost its way; Bill Ford needs help turning his company around and he knows it. Rick Wagoner is trying to persuade the financial community that GM is a winner, even as its inventories are swelling, earnings are shrinking, and vulture capitalists are starting to circle. Chrysler, which merged with Daimler Benz in 1998, is surviving but not thriving, and its Daimler-appointed CEO, Dieter Zetsche, finds his faith in the company’s future beginning to waver.

Over the next 32 chapters, Vlasic skillfully braids their stories together, with each of the companies providing dramatic contrasts to the others. Ford is wandering in the wilderness, but actively searching for a leader to guide it out. That leader appears in the shape of the charismatic, straight-talking Alan Mulally, formerly a senior executive at Boeing. Chrysler is the subject of a heroic turnaround attempt by Zetsche, before he succeeds the ousted Daimler chief executive Jürgen Schrempp, architect of the failed merger, and sells the American automaker. GM brings up the rear, still fundamentally in denial and ultimately trusting that muscle and scale will see it through, as they had in the past.

The hero in the book is Alan Mulally, who prospers from Bill Ford’s prescience in mortgaging the company’s assets, which provides the liquidity Mulally needs to avoid bankruptcy in the coming financial meltdown. As CEO, Mulally unites fractious Ford executives (“One Ford...One Team...One Plan...One Goal”) and demands that the truth be spoken and mistakes acknowledged openly — formerly a rare practice at Ford.

Rick Wagoner and his team at GM, and a succession of bosses at Chrysler, on the other hand, seem helpless as their companies head inexorably toward the value destruction of Chapter 11 and taxpayer-bankrolled renewal. The situations in which these companies find themselves are tangled and vexed, populated by powerful players with sharply differing goals who are willing to make concessions only in extremis. Indeed, one wonders whether by 2005 anyone could have saved either firm without going through the purging fire of bankruptcy. The costs associated with reducing dealer networks, for example, could not be contemplated outside Chapter 11.

Vlasic is a master storyteller whose prowess makes the absorption of many complex facts painless. The conversations among the senior players in the auto industry are compellingly rendered and resonate with every manager’s experience. Even though the narrative style usually revolves around the characters, it is striking how personal these major business decisions are and how (as neuroscience research confirms) emotion often reigns supreme in the final choices.