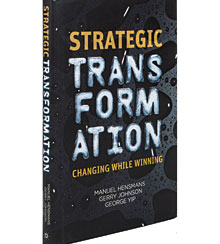 The Ship of Theseus,” an ancient Greek paradox, tells the story of a boat that’s moored at dock after a long battle. One by one, all of the ship’s planks are replaced with new ones. Eventually, the discarded planks are used to build a new ship. As it is built, a question emerges: Which ship is Theseus’s ship? Further, if the ship’s identity has shifted, at what point, with which plank, did the change occur?

Plutarch described a variant of this paradox as “the logical question of things that grow.” It’s a story that resonates with managers who have transformed their companies. As they are often quick to point out, however, their plank-changing rarely happens at a dock. It happens on the high seas, in hurricane winds and under torrential downpours as captain and crew work feverishly to keep the ship afloat.

The book Strategic Transformation: Changing while Winning, by Manuel Hensmans, Gerry Johnson, and George Yip, addresses corporate rebirth à la Theseus’s ship: It investigates whether it is possible for companies to transform themselves, enhance their competitiveness in fundamental ways, and become something new while they are still in safe harbor and without the impetus of crisis. It’s an important question, one to which managers and scholars alike crave an affirmative answer. The authors, a trio of business school professors, supply it, though not as decisively as one might wish.

Much of the book’s original contribution is drawn from an empirical study of large U.K. firms. The early chapters lay out the research methods that were used to identify firms that had long periods of strong financial performance coupled with evidence of meaningful transformation. The initial analysis begins with 215 firms; of these, only 28 clear the financial hurdles. The requirement that there be evidence of transformation further reduces the list to six companies, and then to four “successful strategic transformers” (SSTs): BP, Cadbury Schweppes, Smith & Nephew, and Tesco. BP is then dropped from the list (apparently because the authors thought they could not get the access to the company they would need), and the study is left with just three SSTs. These firms are then matched with “comparator” firms that did not transform themselves, and the paired comparisons become the spine of the analysis.

Despite the authors’ efforts to stay true to the rigors of the scientific method, some critical junctures in their case are not transparent and some disaffirming evidence arises that is difficult to ignore. One might question, for example, whether it is appropriate to compare Cadbury Schweppes, a confectionary/beverage company, to Unilever, a larger and much more diversified firm. Or whether Tesco’s triumph over rival J. Sainsbury, which occurred in the later part of the research period, is due to subtle organizational processes and attitudes built up over a long period or to a visionary, charismatic leader—in this case, Sir Terry Leahy. The authors eschew the latter possibility but fail to thoroughly discredit it as an explanation. Most unnerving of all, one could question whether all three SSTs that emerged from the exhaustive process actually fit the bill: Cadbury Schweppes had several periods of uninspiring performance and de-merged in 2008, and Cadbury itself was acquired by Kraft in 2010. Is that a sign of strength or an indication that the firm lacked the scale to thrive on its own in a competitive global marketplace? Further, since the book’s publication, and following the eurozone crisis, Tesco appears to be faring worse than J. Sainsbury in the U.K. supermarket business. In a larger sample, these issues might not be so concerning, but with only three SSTs, they represent two-thirds of the study.

The book’s high point (and it is a high point) comes in the final chapter, where the authors put forward 10 proposals for “playing the long game,” that is, successfully maintaining a certain course of action while also rebuilding for the future. It’s the gold at the end of the rainbow. In particular, the points about selecting and developing a different next generation of management, ensuring that decision making allows for dissent, and being mindful of the risks that come with size and dominance could have helped many firms I’ve worked with, even if the ideas are far easier to appreciate in theory than to implement in practice. Here is where the journey through the early chapters pays off, the weak links move to the background, and the broad strokes emerge.

If this effort could be recast, I would like to see this book positioned as a thought piece, inspired by the authors’ own careful observations and reflections, as well as those of others, rather than as a scientific study. Cast as science, it has shortcomings that are hard to get by. But cast as thoughtful commentary, Strategic Transformation has much more to offer.

Five ways to avoid the pitfalls of binary decisions
Before you decide, check how the question is framed to ensure you have all the information you need and have considered all your options.
by Eric J. McNulty
Digital issue