The Alchemists: Three Central Bankers and a World on Fire 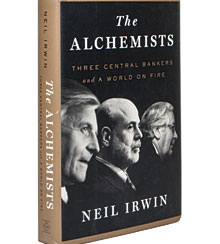 Now that five years have passed since the failure of Lehman Brothers turned the financial crisis of 2007–08 into a full-blown market panic, it’s useful to look back at the lessons learned. Washington Post reporter Neil Irwin, in his new book, The Alchemists: Three Central Bankers and a World on Fire, provides an excellent insider’s account from the policy perspective, but not—at least for this reader—much optimism about the future. (The title refers to medieval alchemists’ quest to turn base metals into gold. Modern central bankers have discovered a better trick: creating money out of thin air.)

Irwin was assigned to cover the U.S. Federal Reserve in August 2007, just as the wheels began to come off the mortgage-backed securities market and the mayhem began to build. He was thus perfectly situated to report on the crisis and its aftermath, and he has made the most of his opportunity. The Alchemists is a deeply researched and painstakingly reported account of what went wrong, and how the world’s top three central bankers—Ben Bernanke at the Fed, Jean-Claude Trichet at the European Central Bank, and Mervyn King at the Bank of England—struggled to keep the global financial system from capsizing.

The Alchemists begins with a nicely told history of central banking that will be helpful to most readers. The world’s first central bank, Sweden’s Stockholms Banco, went belly-up in the middle of the 17th century, marking the first, but far from last, time a monetary policy blunder ignited a business downturn. The feckless central banker, Johan Palmstruch, was sentenced to death, although the sentence was later commuted.

It wasn’t till the mid-19th century that monetary policy came into its own, during the panic that followed the failure of the London bank Overend, Gurney & Co. in 1866. As the money market froze up, threatening the British economy, the Bank of England flooded the banking system with money, ensuring that banks could continue to fund businesses. This innovation was highly successful; the crisis passed somewhat quickly, and economists learned that a central bank, acting boldly, can stop a market panic and limit the consequent losses in economic activity.

But future central bankers failed to learn from the Bank of England’s experience. After the stock market crash of 1929, as Irwin goes on to relate, the Federal Reserve failed to act aggressively to protect the banking system, provoking the Great Depression.

The world was lucky that Ben Bernanke was running the Fed when the panic of 2008 began. A monetary economist and former Princeton professor whose field of study had been the Great Depression, Bernanke immediately recognized the gravity of the situation, and applied the lessons of 1866 with energy and imagination. He orchestrated a series of monetary policy maneuvers, which have continued since, to keep the banking industry working and interest rates low enough to enable economic recovery. Bernanke’s European counterparts were slower to act, and their economies have paid the price in slower recoveries.

The other large lesson that should have been learned from the Great Depression was that governments can limit the downside of a recession by boosting government spending. U.S. policymakers did some of this, beginning with the unpopular US$700 billion Troubled Asset Relief Program in late 2008. But by historical standards, it wasn’t a very big intervention, and little has been done since, as politicians pushed instead for lower government spending. European nations, even more disastrously, embraced austerity from the beginning, which has put them right back at the threshold of recession.

Irwin’s reporting enlivens what can easily be a dry subject. He recounts, for example, how then White House Chief of Staff Rahm Emanuel (now the mayor of Chicago) responded, shortly after President Obama took office in January 2009, when a staffer told him that it could take weeks to draft a financial reform bill. Emanuel, Irwin relates, said, “Sit down and start fucking typing.”

The book answers many questions authoritatively, but some of the biggest and most important ones are outside The Alchemists’ scope. One is how successful central bankers will be in unwinding the current era of cheap money without unleashing inflation or causing recession. Another is how Europe will be able to preserve its common currency while serving the needs of its economically diverse members. Finally, it’s difficult to put The Alchemists down without asking whether enough re-regulating of the banking industry has been done to ensure that it won’t all happen again.