Thanks for the Feedback: The Science and Art of Receiving Feedback Well (Even When It Is Off Base, Unfair, Poorly Delivered, and Frankly, You’re Not in the Mood) 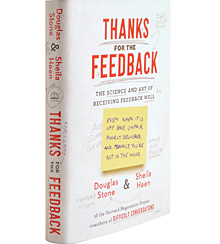 The word feedback was coined during the Industrial Revolution to describe how energy, momentum, and signals were returned to their point of origin in a mechanical system. Later, the concept of feedback was instrumental in the development of the electronic circuit. After World War II, feedback was adopted by the emerging field of industrial relations to describe what happened when individuals fed corrective information back to its human point of origin.

Feedback quickly became enshrined as an essential technique for managing performance, improving morale, and aligning teams. Yet even as its popularity spread, it became an object of mistrust and even dread. In Thanks for the Feedback, Douglas Stone and Sheila Heen, lecturers at Harvard Law School and authors (with Bruce Patton) of the influential Difficult Conversations: How to Discuss What Matters Most (Viking, 1999), note that more than 50 percent of people perceive their performance review—an undertaking devoted entirely to feedback—as unfair or inaccurate, and more than 60 percent of executives believe their managers lack the courage to offer honest feedback.

In other words, the process of giving feedback often results in a counterproductive mess. That’s why many of us mentally tuck and roll when we hear the seemingly innocuous phrase, “Can I give you some feedback?”

Many of us mentally tuck and roll when we hear, “Can I give you some feedback?”

It’s also why Thanks for the Feedback is an extraordinarily useful book. It’s full of helpful techniques that can be put to use by anyone seeking to manage an organization, lead a team, engage a business partner, or navigate a relationship. Drawing on decades of research conducted by the Harvard Negotiation Project and its various offshoots, as well as findings from other academics and the “brain labs” that seem to be popping up at every turn, Stone and Heen offer a full-spectrum analysis of how to skillfully receive feedback.

Why focus on receiving feedback rather than giving feedback? Because, as the authors make clear, it is receivers, not givers, who are in control of the feedback process. It is receivers who choose what and how much information to take in. Because of this fundamental dynamic, it’s useless to try to teach feedback givers to be more skillful; instead, feedback receivers need to get better at hearing what givers have to say and distinguishing what’s useful from what is not.

Stone and Heen proceed to unpack how this can be done by identifying the origins and effects of—and the alternatives to—the three triggers that keep us from fully engaging in feedback conversations that could contain valuable insights and learning experiences. “Truth triggers” are set off by the substance of the feedback itself as well as our natural impulse to deny any observation that we perceive as casting us in the wrong (“I don’t do that!”). “Relationship triggers” cause us to quickly shift our focus from the information being offered to how we feel about the person delivering it (“You have no right to say that to me!”). “Identity triggers” are little daggers to the heart that cause us to interpret simple information as a judgment of our overall worth (“I must be a total loser if that’s how you feel!”).

One of the notable features of the book is its use of graphic tools—a refreshing break from the recent trend of using illustrations as a visual respite from the text rather than to add value to the content in business books. For instance, to give teeth to the truism “we all have blind spots,” the authors use a “Gap Map” that clearly shows how our awareness of the intention and meaning behind our behavior limits our awareness of how others perceive that behavior. The solution: Develop the ability to distinguish between the effects that our behavior produces and the intentions behind it. If we can do that, we can eliminate some of the blind spots that mire us in self-defeating behaviors.

My only quibble with Thanks for the Feedback is a small one. It contains too many previews and recaps—too much telling the reader what the authors are going to say and encapsulating what has just been said. That complaint aside, Stone and Heen have done a remarkable job of showing individuals and organizations how to leverage the enormous value of feedback, one of the most powerful instruments available for human learning.