The Innovators: How a Group of Hackers, Geniuses, and Geeks Created the Digital Revolution

In his later years, when asked how he invented the shipping container, freight magnate Malcom McLean would offer an anecdote. One day in the 1930s, the former truck driver was waiting at a pier to deliver bales of cotton. Watching dockers load thousands of cartons and barrels aboard the ship, young McLean wondered why the cargo was not assembled in containers to speed up the process. From that brainstorm, McLean said, the modern shipping container was born two decades later.

This story, so far as I can tell, was fabricated from whole cloth in response to a question—“How did you invent the container?”—whose very premise, that the container had a single inventor, was false. Yet people love McLean’s anecdote, because it confirms common preconceptions. Call it the Isaac Newton theory of innovation: You sit under a tree, an apple falls on your head, and voilà, you discover gravity. 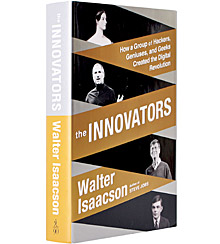 I’m hopeful that Walter Isaacson’s latest book will lay the Isaac Newton theory to rest for good. The Innovators is a history of the computer and the Internet that unfolds as a series of profiles of mostly well-known individuals who played key roles in the development of modern information technology. Whether Isaacson is discussing Ada Lovelace, who sketched out the concept of the multipurpose computer in 1843, or Larry Page and Sergey Brin, whose doctoral research at Stanford University turned into Google, he focuses on a single question: What causes one idea to take root, with world-changing consequences, while another idea is abandoned?

Isaacson, the author of definitive biographies of Steve Jobs and Albert Einstein, finds that brilliant ideas invariably have a history, and that brilliant innovators are people who know how to build on the work of others to turn ideas into reality. As he puts it, “Only in storybooks do inventions come like a thunderbolt.” The Innovators repeatedly shows that coming up with breakthrough ideas is the easy part of innovation. The hard part? Turning those ideas into advances that are practical to implement—practical not only technically, but also commercially. Doing so, Isaacson emphasizes, requires not just an idea, but an ecosystem.

Nowhere is this clearer than in Isaacson’s exploration of two men pursuing the dream of a digital computer. Between 1939 and 1942, John Atanasoff, a physicist who taught at Iowa State University—an institution known for cutting-edge work in electrical engineering—developed a prototype designed to solve linear equations. Lacking colleagues who could help him resolve problems with memory units and punch-card readers, he usually toiled alone. Nor did Iowa State make sure his inventions were patented. Atanasoff’s small model, stored in a basement when he was called up to war, was forgotten, shortly to be dismantled for parts.

Around the same time, a physicist named John Mauchly was working along similar lines. Mauchly, like Atanasoff, was not affiliated with a big-time school. (Mauchly taught at Ursinus College.) Unlike Atanasoff, though, he was a networker, a regular at academic conferences who discussed his ideas widely. When he learned of Atanasoff’s work, he traveled to Iowa to see the computer Atanasoff was building. Mauchly and an engineer, J. Presper Eckert, drew on Atanasoff’s work, and that of many others, to develop the famed ENIAC at the University of Pennsylvania, a 30-ton multipurpose computer that was 100 times faster than any previous machine.

A quarter century later, Atanasoff sued, claiming they had stolen his ideas. In 1973, a court declared Atanasoff the inventor of the digital computer and nullified patents granted to Mauchly and Eckert. This ruling, Isaacson insists, misunderstands the nature of innovation: ENIAC was built on the work of Atanasoff and many others, and properly so. “Great innovations are usually the result of ideas that flow from a large number of sources,” he writes. “An invention, especially one as complex as the computer, usually comes not from an individual brainstorm but from a collaboratively woven tapestry of creativity.”

Isaacson might have put greater emphasis on the way that collaboration can occur in different ways. The boss who forces employees to work at a shared table to promote collaboration may only be stoking resentment. Although it is true, as Isaacson writes, that “innovation is not a loner’s endeavor,” it is also true that each of us has individual preferences for interacting with others. Even with hard work, The Innovators shows, breakthroughs may not arrive on a corporate bean counter’s schedule.

“Innovation is not a loner’s endeavor.”

Topics: innovation, digitization, biographies, innovators, academics
Get s+b's award-winning newsletter delivered to your inbox. Sign up No, thanks