Most business biographies are boring, telling tales of past careers and deals done long ago. Few let us into the real secrets of the life of their subject or the keys to their success. Not The Merchant of Prato: Francesco di Marco Datini, 1335–1410, by Iris Origo (Alfred A. Knopf Inc., 1957; David R. Godine Inc., 2002), although it is about the life of someone whom few, if any, will have heard of. 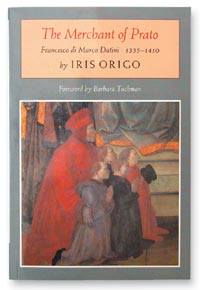 That someone, Francesco di Marco Datini, died nearly 600 years ago, in Prato, near Florence in Italy. You can still see his statue in the main square there, justifiably so, since it was to him that the little town of Prato owed the foundation of her riches.

He would, today, be just another name, a rich businessman of the early Renaissance, were it not for one fact — he kept all the letters he had ever written, to his managers, his wife, and his best friends, along with all his business files, and he left them in his house.

Four hundred and sixty years later, a few learned citizens of Prato found them there, in dusty sacks hidden underneath the stairs. There were some 500 ledgers and account books, about 300 deeds of partnership, insurance policies, bills of exchange, and checks, and, most intriguing of all, some 140,000 letters, of which 11,000 belonged to his personal and private correspondence with family and friends and the rest, in 503 files, to his business.

Historic Treasures
It was a treasure trove, and Iris Origo, an Anglo-American social historian married to an Italian aristocrat, plunged in and became immersed in it. Few biographers in this new age of the telephone and e-mail will have such riches to draw on, and few businesspeople would, today, want to preserve their private, and often indiscreet, conversations with their wife or husband and their close friends, even if they could.

Francesco Datini, however, wrote to his wife on most days that he was away from her, which was much of the time, and kept his letters and her replies. Furthermore, in order to maintain control of his international business, he would write every week to the managers of each of his branches. Veritable Bibles, he called these letters; “and I always say I will be brief but then I write a whole psalter!” What we do today by e-mail and telephone, he had to do by personal mail.

Francesco Datini was a global merchant, trading mainly in wool, with branch offices all over Europe, some run by partners, others by salaried managers. He was also one of the earliest merchant bankers, specializing in bills of exchange that financed most of the trade in those times. He was using double-entry bookkeeping 100 years before it was supposedly invented by an Italian monk, and he ended up as one of the richest men of his day.

Breeding Trust
His papers offer us a privileged insight into the life and times of a successful self-made businessman of the 14th century. That would be fascinating enough, but what is more intriguing still is to see how closely Datini’s management and personal dilemmas resemble our modern concerns.

Trust, then as now, was critical, when you were managing by remote control. Picking the right person in the first place avoided the need for endless detailed instructions and reviews. Datini didn’t always get it right. Only one manager, whom he called a saint, did he trust completely throughout his career. Others
needed constant reminders, although these were always written by him more in the tone of a scolding parent than of a supervisor, which removed much of the sting but left the bite. One letter starts: “I see that you only read my letters once, and reply heedlessly … and then sit by the fire dreaming of the great profits you will make!” To another manager he wrote, “You cannot see a crow in a bowlful of milk.”

But trust also required the careful allocation of responsibilities “…so that we shall all understand each other, and each man shall have his own task; and one man shall not say, ‘The other has done this to me,’ and the other cry, ‘He lies!’ For I shall keep so close to these matters, that I shall at last see the truth.” The secret to trust, Datini implies, is delegation with carefully defined responsibilities, together with the instinct to know when to dive into the details, because trust can seldom be absolute, or indefinite. His partnership arrangements, for instance, usually lasted for only two or three years, after which they needed to be renegotiated.

Where trust was given, however, loyalty was required in return. When Datini took on the son of his friend Ser Lapo Mazzei as a young recruit, he wrote to him, “Do your duty well, and you will acquire honor and profit, and you can count on me as if I were your own father. But if you do not, then do not count on me; it will be as if I had never known you.” And high standards were expected. Datini wrote: “In May it will be two years since I slept at ease for more than four hours a night. Take this example. And if you wish to reply, ‘You are old and cannot sleep, and we are young and could sleep even on bare boards,’ I will say that I, too, would take pleasure in lying warm abed.”

These are things that in a modern organization we might say in a conversation. Written in letters in a time when letters were rare, they may have had more impact. Then again, since there was no easy way of sending copies around the organization, every letter had to be a personal one. That breeds trust, even when the letter contains a rebuke.

A businessman, Datini believed, needed money, experience, and sense if he was to be successful. By money, he meant that it was preferable to do business with one’s own capital: “For what is done with other men’s money comes to cost too dear to produce profitable trade.” Experience meant the detailed knowledge of the products one was dealing in, so that no one could deceive you, and by sense he meant the ability to distinguish between what is important and what is ultimately trivial, as well as a constant awareness of the downside of events and relationships, or, indeed, of trusting some people too much. “The greater part of mankind,” he reminded one of his managers, “is evilly disposed; the earth and sea are full of robbers.”

Sometimes it is hard to see how today’s management textbooks can improve on the hard-earned wisdom of this 14th-century millionaire.

A Mirror of Our Times
Francesco Datini was a workaholic like many modern managers, obsessed by the desire to grow his business and to accumulate wealth, even when he clearly had more than enough. His ledgers were headed “In the name of God and profit,” but until the very end of his life it was profit more than God that occupied his mind. He had a long-suffering wife whom he sadly neglected. One of her letters sounds horribly contemporary: “I think it is not necessary,” she writes, “to send me a message every Wednesday to say that you will be here on Sunday, for it seems to me that on every Friday you change your mind.”

But he was fortunate — he had a best friend and mentor who was also his lawyer and who did his best to keep him focused on what really mattered in life: “In God’s name,” writes Ser Lapo Mazzei, “and for the sake of both body and soul, control yourself a little and go with the world as it goes. Do not kill yourself because the wheel turns sometimes this way and sometimes that, as it always has and always will.”

However, Datini was ambitious, for recognition as well as riches, to the dismay of another friend, Luca, who wrote, “You said you would live in peace and not seek for worldly fame … But now I see, either because of worldly vanity or some other men’s counsels, you have changed your mind and wish to go to Pisa to see the King.” Undeterred, Datini still went.

Like many successful businesspeople, Francesco Datini was stingy in his business but ostentatiously generous in his personal life; too much so, thought Ser Lapo: “Do not believe,” he wrote, “that sweet oil, bestowed by a friend, does not please me. But, in faith, too much of it gives me no pleasure.”

It was not until he was in his 60s and the threat of plague hit Italy that Datini began to contemplate the prospect of his death and to wonder what it was all for. Even at the very end, as Datini passed away in his arms, Ser Lapo said, “It seemed to him very strange that he should have to die, and that his prayers should be of no avail.” He made amends finally in his will, drawn up by his mentor, leaving the great bulk of his worth to endow a foundation for the poor in Prato and to help found the Ospedale degli Innocenti in Florence, both of which are still standing.

Today, a mass is said for him every year on the day of his death in Prato’s cathedral, and the passerby can still read the inscription carved over the doorway to his house: “The Ceppo of Francesco di Marco Datini, Merchant of Christ’s Poor,” an honor of which some members of the city council did not approve. “If he rendered some service to Prato,” they grumbled, “it was only because he sought to profit by it.” It was ever thus.

This is a lovely book, beautifully written, one to dip into to savor the life of those times. But because Datini is so wonderfully honest with himself and his wife and friends, the book also acts as a mirror reflecting our own dilemmas. Six hundred years may have changed the world in some respects, but the problems of love and marriage, of business and the management of people, of money making and the point of life, these have altered very little down the centuries. God and Profit may now be retitled Social Responsibility and Shareholder Value and written in our annual reports rather than at the head of our ledgers, but that does not make them any easier to balance, in business or in personal life.

Topics: trust, trade, authors, biographies, europe
The business insights you need to succeed. Get s+b’s best ideas delivered to your inbox twice a week.
Sign up         No, thanks