No one was picking up the phone at the big investment banks. It was the summer of 2009, just as the full depth of the Great Recession was revealing itself, and Katherine “Katie” Sproul, CEO of Halstatt, wanted answers from the so-called Wall Street experts she had entrusted with her family’s wealth. She reached out multiple times and heard nothing but crickets. “That was certainly an inflection point for reflection,” recalls Sproul, great-granddaughter and heir of the 20th-century advertising and land tycoon Barron Gift Collier. 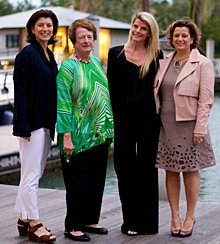 From left to right: Katherine (Katie) Sproul, her mother, Juliet (Judy) Sproul, and her sisters Jennifer Sullivan and Julie Sproul. All are board members of Halstatt.
Courtesy of Halstatt

The result was a change in direction for Halstatt, and not for the first time. Sproul was following in the footsteps of her mother, Juliet Sproul (known as Judy), who three decades earlier had risked her inheritance by developing a sleepy bit of Florida real estate into a winter playground for billionaires, the Grey Oaks Country Club. Back then, she had to fight her male trustees, who wanted to sell the land to developers.

Daughter Katie’s ambitions were different. Instead of parking the family assets with unresponsive banking institutions, she decided to become an active investor herself, and she sought innovative ways to make those assets work harder for the family. Committed to preserving capital, she also looked for serious risk investment expertise to partner with — but she would consider only those buying into the “Halstatt Ethos,” a written account of the firm’s values. The bold moves made by Sproul and her mother turned property worth just a few million dollars into a billion-dollar organization. Not surprisingly, the family asset community has taken note.

Halstatt’s emphasis on good governance, transparency, and financial sophistication is rare among closely held family wealth offices. But it’s the nature of how the company structures its partnerships that is most distinctive. Whereas most family wealth offices either hire a handful of investment experts or outsource decisions, Sproul seeks dynamic investment professionals and provides them with seed capital to create their own businesses in partnership with Halstatt. And because they have skin in the game, it helps retain the talent. By contrast, before the Soros Fund’s recent strategic overhaul, it had shed numerous experts, including seven chief investment officers since 2000 and multiple money managers over the past two years. Halstatt empowers its partners to grow by being open to external capital — often in the form of funds from other family wealth offices seeking to duplicate Sproul’s success.

That spirit dates back to the early 1900s, when Barron Gift Collier made a fortune in streetcar advertising in New York. In 1911, he bought 1.3 million acres of land in Florida (along with newspapers, banks, a bus line, a telephone company, and a steamship line). His descendants are still among the largest landowners in the country. Halstatt, the operational and investment arm of the Sproul side of the Collier family, was founded more than three decades ago by Sproul’s mother. As a widow and mother of three daughters and a female heir to the Collier fortune, she initially wasn’t allowed much say in how her money and property were handled. But she fought for control and led the Grey Oaks Country Club development.

Determined to create value and honor her mother’s wish to “leave the family with more wealth than I inherited,” Sproul has taken calculated risks to diversify Halstatt’s portfolio and make it less dependent on Florida real estate, which took a beating during the global financial crisis. Although property remains a core investment, Sproul now oversees projects including venture capital investments in technology, specialty finance, and a real estate private equity fund. Halstatt has also launched a search initiative, which invests in small and medium-sized enterprises (SMEs) in need of more professional management, and has created an investment platform to take outside capital and finance every aspect of an SME’s capital structure.

A graduate of Cornell University with an MBA from the Yale School of Management, Sproul has been deliberate about hiring and partnering with individuals outside the family who are the most knowledgeable in their fields, including Ivy League business school graduates with strong track records in other industries.

One example is Stanley Vukmer, a Yale alumnus whose specialty finance company, Haversine Funding, allows family offices to invest directly into its SME loan portfolio, generating higher yields at far lower risk than anything comparable in the broader bond market because of the stronger loan covenants and higher collateralization that can be negotiated with private debt. Halstatt is a significant minority owner of Haversine, having provided initial funding, management advice, and office space. Sproul likes to keep partners close: Vukmer has an office a few doors down from hers. But she “empowers these affiliates to operate independently,” Marinelli says.

Since the recession, Sproul also has put systems in place to ensure greater transparency. This is unusual for family wealth offices, which tend to be secretive. “Transparency is critical, but it’s not as common in family organizations as you would think,” Sproul says. “There’s this fear that if you tell the kids how much you’re really worth, they’re going to turn into brats or blow it. But I think that forthrightness along with the right guidelines creates a sense of responsibility, accountability, and empowerment.”

Transparency is critical, but it’s not as common…as you would think. There’s this fear that if you tell the kids how much you’re really worth, they’re going to turn into brats or blow it.”

The fact that Halstatt makes direct investments is something “many family offices talk about, but few do successfully,” says Patrick George, chief investment officer of Halstatt. Also unique is the company’s openness. George, who has a Harvard MBA and diverse experience as an investor, entrepreneur, and portfolio manager, works with Sproul to ensure that communication to family members is clear, expectations are managed, and the risk/return profiles of each investment are well understood. There’s a strong culture of accounting and reporting on a quarterly basis. Each year, the firm takes the extra step of bringing in an outside firm to make a detailed return analysis on every investment made.

Although Sproul considers Halstatt more of “an investment firm than a family business,” each entity Halstatt invests in must reflect her family’s values, which include protecting the environment, creating employment, and somehow contributing to the communities in which they operate. Family members understand exactly what those values and responsibilities are, because matriarch Judy Sproul laid them all out in the Sproul family constitution. And external partners must review the Halstatt Ethos, which includes: “We do what we say we are going to do; we do the right thing, even when it might be difficult; we don’t hide mistakes, we learn from them; we respect every voice in the conversation…. As a close partner of Halstatt, you serve as an extension of our organization. As such, it is imperative that you understand and always reflect our culture.”

“The way my mom approached it was more participatory and consensus building,” Sproul says. “She believed that everyone deserves to be heard. That doesn’t mean everyone is in charge, but listening to more perspectives can lead to better decisions and results.”

Today, Sproul, who has two teenage sons, is less of a rare breed than her mother was when she took the business reins. About a third of family office CEOs are female. Two of Katie Sproul’s sisters, Jennifer Sullivan and Julie Sproul, are also on Halstatt’s board, along with her mother. Katie Sproul also wields considerable influence with other family office leaders, who have observed Halstatt’s track record and tend to follow where it leads. This is significant beyond Halstatt’s own holdings, as evidence suggests many startups, unable to get financing from traditional sources, are turning to family wealth offices for investment capital, either through direct investment or venture capital funds.

“Katie has a mantra,” says George. “Halstatt is a family business, but business comes first.”

Topics: gender, investing, risk, risk management, succession planning, women in business
The business insights you need to succeed. Get s+b’s best ideas delivered to your inbox twice a week.
Sign up         No, thanks