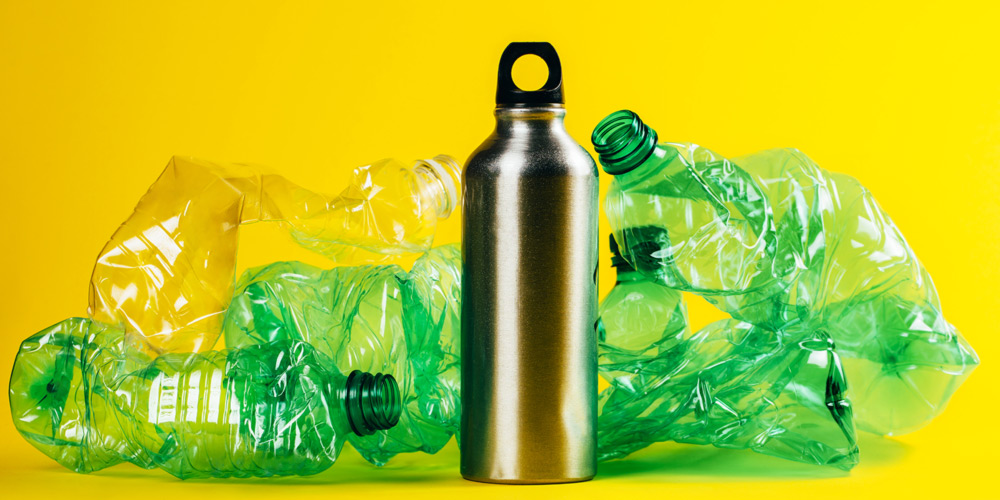 According to the United Nations Environment Programme, only about 9 percent of the 9.9 billion tons of plastic generated globally since the 1950s has been recycled. And almost halfPDF of the plastic waste poisoning marine life, contaminating food, and clogging waterways and sewers comes from consumer packaging. As citizens and governments wake up to this plastic pollution problem, they’re turning to business to solve it. In response, companies are trying to craft new approaches to plastic, whether reducing overpackaging or rolling out biodegradable materials made of seaweed and cornstarch. But one solution — the reuse and refill business model — stands out for its potential to shift consumer behaviors while unlocking new revenue streams and cost savings for companies.

It’s easy to see why cheap, sturdy, and lightweight plastic quickly became a convenient, even innovative, packaging option for consumers. The popularity of plastic skyrocketed in developed countries in the 1970s after the invention of the polyethylene shopping bag. Within two decades, plastic packaging had flooded the world; consider how, in developing countries, companies have marketed items as varied as shampoo and hot sauce in tiny single-use sachets. Products in cheap, throwaway packaging solved immediate consumer problems — for example, by offering unbeatable value pricing to millions of low-income consumers — but created a long-term health and environmental disaster.

Now, businesses such as Chilean startup Algramo, literally meaning “by the gram,” are tackling the crisis by offering the same value to consumers, but in reusable containers. Algramo makes products including rice, detergent, and other everyday staples available in small, affordable quantities via smart vending machines and reusable containers. Its bottles are equipped with RFID tags that allow consumers to earn discount credits with each use, incentivizing them to refill rather than throw away the containers. Flush with funding from Closed Loop Partners, Algramo is set to introduce this innovation in the U.S., too. It has good reason to do so: On a per capita basis, North America, Japan, and Europe generate the most plastic waste.

Algramo is in good company. As part of the New Plastics Economy initiative, launched two years ago by the Ellen MacArthur Foundation and the U.N. Environment Programme, more than 400 organizations have set concrete targets toward reducing plastic use by 2025. Many of those companies, both startups and established brands, are testing reuse and refill solutions. Their motivations aren’t strictly altruistic: The Ellen MacArthur Foundation estimates a US$10 billion business opportunity in converting even 20 percent of global plastic packaging to a reusable model.

Reuse is an old idea whose time has come

By reviving reusability, companies are basically repackaging (pun intended) an old idea. They are recasting themselves as modern-day milkmen, offering containers that consumers can return for refilling again and again. Here are five reasons to believe that such solutions will gather enough momentum to start changing how we think about packaging, turning it from a disposable waste into a useful product with a long life.

Today’s brands are selling sustainability as a plus. In leading companies, the concept of sustainability has been around a long time. Procter & Gamble, for example, has been making its Tide bottles with 25 percent recycled plastic for more than two decades. But companies have learned that it’s easier to sell sustainability as an add-on to an offering that already meets core purchasing criteria such as convenience and reasonable cost than it is to sell sustainability as the main attraction. So they are now focusing on creating great products, services, and user experiences that also happen to be sustainable. Reuse and refill models meet these criteria. Companies aren’t just repurposing old jars and boxes to shrink the plastic footprint — they’re building reusability into business models to offer consumers customizable products, new subscription services, and great experiences at affordable price points.

By reviving reusability, companies are basically repackaging (pun intended) an old idea. They are recasting themselves as modern-day milkmen.

Take SodaStream, PepsiCo’s sparkling water–making home appliance, which provides consumers with a fun, healthy, and eco-friendly experience. With reusable bottles and compressed CO2 in returnable cylinders, consumers can make their own flavored sparkling water at home. As a bonus, they can help a brand that aims to eliminate 67 billion plastic beverage bottles by 2025.

Some reuse models, already woven into the culture and lifestyle of developing countries, are making their way into mature markets. In bustling Mumbai, the 130-year-old dabbawalla lunch system serves as many as 200,000 meals per day to the city’s workers in metal lunchboxes and then collects the empty containers for reuse. The cooperative is a Harvard Business School case study and the inspiration for the U.K.-based startup DabbaDrop, which delivers food in reusable lunchboxes to Londoners looking for plant-based, planet-friendly meals.

2. Sustainability-minded businesses are seeking alternatives to recycling. Recycling has become an increasingly expensive proposition, leading companies, including those that have made public pledges to reduce plastic waste, to look for alternatives. These days, recyclers are feeling the same pressures from COVID-19 as other manufacturers are; they are adjusting operations in response to changes in demand and implementing new workplace safety measures. But recycling was facing disruption well before the pandemic. Two years ago, China started blocking imports of plastic recyclables usually shipped from Europe and North America, and other Asian countries followed suit. And last year, almost all countries — with the notable exception of the United States — signed an agreement to regulate global trade in plastic to prevent plastic waste from flowing into developing countries without their consent.

This shift has left cities and towns in developed countries facing stockpiles of used plastic and confronting higher domestic recycling costs. It has also opened consumers’ eyes to an inconvenient truth: Tossing plastic in recycling bins has turned out to be an aspirational exercise. Discarded plastic was simply getting shipped to far-off locations and, eventually, ending up in oceans.

Faced with these facts, companies are turning to more cost-effective reuse and refill solutions. A progress reportPDF published last year by the Ellen MacArthur Foundation reported 43 reuse pilots. Concentrated refills and tablets, for example, are less expensive to transport and package than new bottles of household cleaners.

3. Big brands are integrating with startups to scale reusability. Ridding the planet of excess plastic is not the only reason big brands are throwing their weight behind reuse and refill startups. For established brands, the online platforms, tracking apps, and smart technologies that go along with such models can generate valuable consumer insights.

It’s not surprising, then, to see new partnerships taking shape between established brands and startups, and this trend makes it more likely that reuse models will scale. Take Loop, a U.S.-based online reusable packaging platform that delivers products to consumers and picks up the empty packaging to clean and refill it repeatedly. Loop delivers items from Procter & Gamble, Unilever, PepsiCo, Nestlé, Clorox, and Coca-Cola, among others, to consumer homes in innovative, reusable packaging.

Within a year of starting operations, the company also announced partnerships with retailers Kroger and Walgreens to sell products in refillable packaging in those stores. Czech-based MIWA, which provides a similar service to consumers, counts Nestlé among its partners. And Algramo plans to develop reusable packaging systems with partners such as Unilever and Nestlé.

The packaging marketed by these companies is not only hygienic, but desirable (think smart-tagged, temperature-controlled, sleek capsules and cylinders for your ice cream, spaghetti, and shampoo). The shopping experience offered by such companies, meanwhile, is designed to be just as convenient as buying things in use-and-throw-away packaging.

4. Policy is slowly shifting responsibility to producers. Historically, governments and taxpayers have been responsible for the management of waste, including plastic. As a result, we have a multitude of global, state, and city laws — in the form of bottle bills, plastic bag fees, and straw and Styrofoam bans — that tackle packaging waste. Amid growing awareness that this patchwork of laws is falling short, a legislative strategy known as extended producer responsibility (EPR) is gaining traction in many countries. EPR makes businesses responsible for the recycling and safe disposal of the consumer products they sell.

In Europe, where 25 countries have implemented EPR in packaging waste policies, a few reuse models are already operating at scale. For instance, the Svenska Retursystem (Swedish Return System) is an EPR-driven business model owned jointly by Sweden’s food and beverage and grocery trade associations. The company delivers lightweight, reusable food crates and pallets to food, beverage, and grocery businesses, collects them again, and cleans them up for reuse. It reused millions of crates and pallets in 2019 alone. In the U.K., where stricter EPR laws for packaging are expected soon, retailers such as Marks & Spencer and Asda have launched food refill stations in their aisles.

The U.S. might catch up; a federal bill, the Break Free from Plastic Pollution Act, introduced earlier in 2020, seeks to put the onus on businesses for recycling and composting waste packaging materials, which would effectively phase out single-use plastic packaging.

5. Sustainability is persevering during the COVID-19 crisis. Immediately after the coronavirus outbreak, disposable plastic appeared to make a strong comeback amid concerns about the spread of infection. Coffee chains, for example, put reusable mugs on pause, and cities and states delayed or suspended plastic bag bans. But business models built around reusability are continuing to forge ahead. SodaStream, in fact, saw its sales boom as people sheltered in place during the coronavirus lockdowns. And recent PwC research shows consumers want businesses to preserve some of the unexpected environmental benefits accruing from coronavirus lockdowns.

As the world begins to cautiously adapt to the new normal of living with a pandemic, businesses have an opportunity to engage consumers about the safety of reusable plastic. Tom Szaky, CEO of Loop and TerraCycle, has been pointing out that there’s no reason to believe that disposable systems are safer than reusable ones. What makes plastic safe is how it’s cleaned. With major brands as its partners, Loop is confident it will keep the trust of consumers as it expands across the U.S. and enters markets in the U.K., Japan, and other countries.

Such perspectives, along with innovations from business that advance sustainability, are evidence of a growing awareness that protecting public health is intertwined with protecting the planet. Without a doubt, single-use plastic is lifesaving when used to make gloves, masks, and personal protective equipment for medical use. But consumer packaging is a different matter.

In the long run, our best bet as world citizens is to design systems that minimize plastic litter. It doesn’t hurt that reuse and refill models also create great user experiences and drive business profitability.