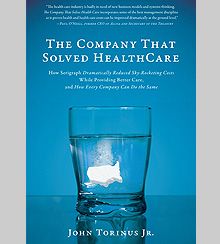 Quick, do you know your total cholesterol level and body mass index? If so, are those numbers healthy or worrisome? Is your PSA level high or low? What about your blood sugar? If you are a CEO, what are these numbers, on average, for the people who work in your company?

Most of us can’t answer these questions. But we should know these indicators of health status as well as we know the faces of our children. For individuals, this knowledge can help stave off deadly, disabling, and costly illnesses, such as heart disease, prostate cancer, and diabetes. Knowing the collective health status of our colleagues can dramatically help improve their health, the corporate bottom line, and, ultimately, the productivity of entire economies.

It is obvious that if we nip disease in the bud, our quality of life will improve and the healthcare costs that threaten our welfare (nearly US$40 trillion in unfunded liabilities for Medicare alone in the United States) will diminish. So why haven’t we succeeded in addressing health problems before they morph into disease? One major reason is that it is very difficult for people to change the habits that cause these problems — overeating, alcohol and drug abuse, stress, and lack of exercise.

This engaging excerpt by John Torinus Jr., chairman of Serigraph Inc., a 1,000-employee graphics parts manufacturer that decided to manage healthcare like any other business cost center, clearly demonstrates how a corporation can provide the knowledge and support that can help people improve their health and prevent disease in cost-effective, efficient, and non-intrusive ways. It provides a profound lesson that could fundamentally alter the role that companies play in creating healthy societies.

An excerpt from Chapter 7 of The Company That Solved Health Care: How Serigraph Dramatically Reduced Skyrocketing Costs While Providing Better Care, and How Every Company Can Do the Same

Kurt Eschenfelder, a former college football player and engineer at Serigraph, stands 6 feet 4 inches and tipped the scales at 330 pounds. He looked indestructible. That was until his required health screening showed his blood sugar count at 177, which meant he was pre-diabetic.

Guys like Kurt are commonplace in Wisconsin, where we like our beer, bratwurst, and butterfat (translate: cheese and other dairy products). Typically, in the passive U.S. health care model, Kurt’s doctor would have given him a lecture, and Kurt would have been essentially on his own to head off a diabetic condition.

In the proactive model Serigraph has developed, Kurt was surrounded with help. He consulted with Tammy Ertl, our on-site nurse practitioner, Rachel Topercer, a dietician, and Sandy Stockhausen, the diabetes educator from Aurora Health, one of the two big health providers in our area.

Kurt listened, and, unlike most diabetics or near-diabetics, he started a disciplined regimen. He dropped about fifty pounds over approximately six months and lowered his blood sugar to around one hundred without medications. Now, Kurt has no other warning signals for diabetes in his physical makeup.

This is the kind of proactive collaboration that the experts propound, yet it happens far too seldom in American medicine. Our dysfunctional non-system pays providers to fix people when they’re broken, not to prevent those same health breakdowns. People like Kurt get lost in the big medical complexes.

The avoidance of diabetes in Eschenfelder won’t ever show up on the economic ledgers of medicine. His restored health will actually reduce revenues to health providers, with the exception of the small stipend paid to our health coaching team. His health and safety is not a procedure that can be billed, because nothing negative happened. There is now nothing to fix.

Kurt is a healthier, happier guy. His employer will benefit from a more productive worker. His family’s budget will be less strapped, and the company’s bottom line will be healthier than it would have been had he not made a course correction.

It’s a win for everyone but the providers who would have profited had he become sick.

Despite all kinds of talk about prevention and wellness in the medical world, incentives are missing for providers to get serious. Most health systems and insurers make token efforts at wellness education and prevention, such as brochures and passive Web sites. They are largely inert.

In that vacuum, payers like Serigraph have no choice but to take on the challenge themselves, to be very proactive on health management. A principal tool that we deploy is our annual free mini-physicals, known as a Health Risk Assessment (HRA). The annual process invariably surfaces several time bombs — urgent health conditions that need addressing immediately.

Kurt’s situation was not an emergency, but another co-worker faced a more imminent threat. That person recorded a PSA reading of 7.5, a high number that indicated prostate cancer. Fortunately, it is a cancer that is very treatable if caught early. While the Health Risk Assessment yielded unwelcome news, he visited an oncologist that same week. His subsequent treatment was successful. His renewed health was the best outcome. Another positive outcome was the reduced cost to him and the company. Early treatment is less expensive than dealing with a full-blown disease. It also saves lives.

We feel so strongly about the necessity of an annual mini-physical that we make them virtually mandatory for employees and their spouses. If you want to be in our health plan, we believe the least you can do is to take the annual physical. You can opt out, but you then pay the full premium for your annual care.

The mini-physicals are not expensive. We contract with our on-site provider, which charges us $45 per person. Using our own nurse practitioner also has the benefit of helping her establish a trusted relationship with our people. Privacy laws in the United States prevent anyone in the company from knowing about those individual conditions, except for the nurse and a benefits specialist. So the nurse is the one who runs the coaching process.

As a bonus, the aggregate health of our group of employees and spouses can be monitored and managed. It’s a by-product. Company managers can analyze group data without invisible individual data. Again, what you measure is what you get, so Serigraph keeps close track of the biometrics of its population.

For example, doctors now want to see patients below 200 for overall cholesterol, so we track that. We know our average cholesterol number in 2003 was 209. We know that it dropped to 200 by 2006 and has now been reduced even further to 193.

We measured our average systolic blood pressure in 2003 at 128, and we watched it drop by 2006 to 120, the latest target for good health. We saw the same progress on our diastolic reading.

It took Serigraph a couple years to come to the perfectly obvious truth that health costs can’t be managed without managing health. Duh!