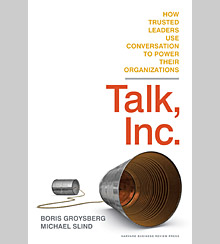 Peter Drucker, in describing eight practices of effective executives, threw in a bonus practice: “This one is so important that I will elevate it to a rule: Listen first, speak last.”

The essence of leadership is to get results in a way that inspires trust. Although there are many behaviors that create trust, none offers greater leverage than listening. Yet, remarkably, it remains something many managers fail to do well. In extensive surveys conducted by FranklinCovey regarding 13 trust-building behaviors, the ability of managers to listen was consistently rated as their least effective skill by employees.

Left to our own devices, we listen last or not at all. Especially with our own employees. In this excerpt, Boris Groysberg and Michael Slind explain how leaders can counteract this tendency by creating structured, formal processes for listening.

Of course, listening alone is not enough; it is understanding that really creates trust and provides insight. Understanding does not necessarily mean you agree; in fact, you may disagree. It simply means that you understand. The test of understanding is not when you tell others, “I understand you”; rather, it’s when they tell you, “I feel understood.” But we will seldom reach understanding without first listening.

An excerpt from Chapter 1 of Talk, Inc.: How Trusted Leaders Use Conversation to Power Their Organizations

Many leaders, to ensure that they’re hearing from the right people in the right time and in the right way, have developed carefully structured procedures for listening to employees. Instead of talking with employees during one-off occasions or on an ad hoc basis, these leaders establish recurring events that put them in touch with specific members of their workforce. At Smiths Medical, for example, an institution called the Executive Sales Council supports key senior leaders in the company. Through meetings with this council, top sales and marketing executives keep up-to-date on issues and problems that customer-facing employees encounter while navigating the medical-device marketplace. The council consists of twelve people, all of them drawn from the company’s sales force. “Field reps only, no managers,” says Judith Rossi, who helps manage the council. “It can be anybody, from a very experienced rep to a rookie.” While all salespeople are eligible to join the group, those who sit on the council have undergone a formal selection process based on nomination by their peers. “For the average sales rep, it’s an honor to be on the council. It’s a résumé builder,” Rossi says. A clearly defined framework is essential to the success of the council: Members serve fixed two-year terms, and their meetings with executives follow a regular schedule. (The group convenes in person about four times annually and by teleconference several other times per year.) Council members, rather than executives, set the agenda for each meeting.

Understandably, some leaders in some organizations are wary of meeting with frontline employees in this way. “They’re concerned about the action that they might be expected to take,” Rossi notes. But at Smiths Medical, the Executive Sales Council has become a reliable tool for narrowing the conversational distance between top leaders and members of the company’s marketing infantry. “It is a way for the feet-on-the-street foot soldier to have a direct line of communication to the top of the house. No filter,” Rossi says. “If we’ve got a supply-chain issue, if we’ve got a quality problem with a product, that issue or problem gets raised directly with the senior leadership team and with the people who can fix it, as opposed to going up the organizational chain of command.” Through the council, salespeople out in the field are able to bend the ears of company leaders back in the home office. “Think of it like the House of Representatives. Its members each have a constituency base, and their job is to represent that constituency,” Rossi explains. “From the sales-rep perspective, it’s a chance to hear firsthand from the senior executives about what is really important.” For Smiths Medical leaders, using the council as a receiver for tuning in to the voice of employees carries benefits that extend beyond the boundaries of the company proper. “It brings the voice of the customer directly to the senior executives of the company,” Rossi says. “It’s a preview of where potential risks and opportunities are going to come from, and how big each risk or opportunity might end up becoming.” So useful has the Executive Sales Council proven to be, according to Rossi, that Smiths Medical has recently created similar groups to support regional sales executives.

Jim Rogers, now the president and CEO of Duke Energy, has followed a slightly different — but no less effective — model of formalizing the business of listening to employees. In 2004, when he was CEO and chairman of Cinergy (which later merged with Duke), Rogers initiated a series of “listening sessions,” as he called them. It was a way for frontline supervisors and other company managers to engage him in direct, open, and uninhibited conversation. Meeting with groups of ninety to one hundred managers in sessions that each lasted three hours, he invited participants to talk about issues of pressing concern to them. Topics ranged from “any burr under their saddle in terms of HR policy, all the way to the grand visions of the future,” Rogers says. Through these discussions, he gleaned information about Cinergy, its people, and its day-to-day operations that would otherwise have escaped his attention.

At one session, for example, he heard from a group of supervisors about a problem related to uneven compensation. “You know how long it would have taken for that to bubble up in the organization and to fix that?” Rogers says. In this case, having heard about the problem straight from those affected by it, he was able to instruct the company’s HR department to implement a solution right away. Getting things done for employees in that way helps Rogers to get closer to them — and closer to the work that they do. Holding sessions in which he can speak intimately with people throughout his company brings other advantages as well. “It allows me to get smarter about what’s really going on in the company,” he observes. “And as I go up the food chain, I go, ‘Well, you know, supervisors are worried about this. What’s your answer to that?’ So it allows me to move the ideas back and forth across the organization.”

Rogers, in his listening sessions at Cinergy, did more than merely listen to employees. He turned those sessions into a forum where employees could put him on the spot. He put himself on the line, in other words, allowing participants in these conversations to address the strengths and weaknesses of his own leadership performance. He listened, and learned, as people at Cinergy subjected his managerial decisions and his management style to an open and honest critique. True listening, after all, involves taking in the bad with the good. It means absorbing criticism, even when the criticism is direct and personal — and even when those who deliver critical remarks happen to work for you.

That next phase of Rogers’s story began during a second annual round of listening sessions. At one session, a Cinergy supervisor suggested to Rogers that he ask employees to grade him as a CEO — to mark him on a scale of A through F, as if he were student and they were his instructors. Rogers took up the challenge. At the very next session, he invited each attendee to enter a grade for him on an electronic voting device. The results, which the voting devices recorded anonymously, appeared on a screen for Rogers and everyone else to see. Over the course of three sessions in the spring of 2005, nearly four hundred Cinergy managers registered their marks for him, and he announced the totals in a memo: 39 percent of listening-session participants awarded him an A (the highest grade), 52 percent gave him a B, and most of the remainder assigned him a C. (There was one D.) At first, Rogers recalls, he “had some trepidation” about this form of listening to employees. Soon enough, though, the value of overcoming such doubts became evident. “I really do believe that trust is built when you are unafraid to be vulnerable,” he says. “When you put yourself at risk, you and they [employees] find out what kind of person you are.”

Employees at Cinergy found out that Rogers was an apt pupil, eager to learn from the grades that they had given him. And Rogers discovered that while employees generally awarded high marks to him, they also believed that he had room for improvement in certain managerial disciplines. Along with asking listening-session participants to grade him, Rogers put an open-ended question to them: “What’s the one thing I need to do better as CEO?” Later, in a memo, he analyzed their written answers and grouped those answers into a few broad categories — Strategy, Vetting of Major Decisions, and so on. Tellingly, the category into which the largest number of responses fell was one that Rogers labeled Internal Communications. Some 20 percent of respondents, he noted in the memo, voiced a wish that he and other senior executives would “visit the field more and . . . share more ‘bad news’ when appropriate.” Thus, even as he sought to get close to employees by way of organizational conversation, Rogers learned that many of them were urging him to get closer still. Another lesson that he took from this exercise concerned the need to follow up on what employees had told him. “My challenge is how to use this data,” he says. “Has it changed me as a person? What will I behaviorally do as a consequence of knowing this? If I do nothing, I know I have lost an opportunity to be a better CEO.”