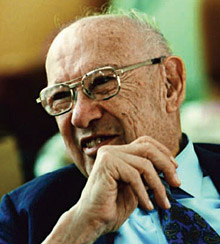 The late Peter Drucker was born in Austria on November 19, 1909, and spent a good many of his 96 years trying to understand the management of organizations. In the last couple of years, rumors have flown that this author or that one was working on a Drucker biography to be published in 2009, marking the centennial of his birth. Such a book has yet to emerge, and it is a shame. “The man who invented management” deserves a full-scale, well-researched, and critical account of his life and work.

But until such a book is written, we must make do with two new books about Drucker that might be considered preludes to a biography. The first is Bruce Rosenstein’s Living in More Than One World: How Peter Drucker’s Wisdom Can Inspire and Transform Your Life (Berrett-Koehler, 2009), a loving account of how the author applied lessons from Drucker’s life and writings to help him get through trying personal times. Limited as its focus may be, the book is nonetheless authoritative because Rosenstein spent a great deal of time with Drucker over the last 12 years of the great man’s life. The other book, Jeffrey A. Krames’s Inside Drucker’s Brain (Portfolio, 2008), is a useful distillation of Drucker’s thinking. Like Rosenstein’s book, it was informed by in­terviews with Drucker and stands more as a (much deserved) tribute than a critical biography.

A formal, analytical, and un­sentimental biography of Drucker would be a complicated undertaking because the catholicity of his interests makes it impossible to pigeonhole his work and devilishly difficult to evaluate his overall contribution. He wrote imaginatively about a wide array of subjects, in­cluding economics, technology, history, politics, demography, and even Asian art. He was not a systematic thinker who propounded a single message or set of beliefs (in philosopher Isaiah Berlin’s famous construct, Drucker was a “fox” with many ideas rather than a “hedgehog” with one big idea). He wrote knowledgeably about all aspects of the corporation, explicating the complexly interrelated functions and roles of planning, strategy, marketing, structure, labor relations, performance measurement, and leadership.

“My main point,” Drucker wrote, “is that the organization is a human, a social, indeed, a moral phenomenon.” In terms of the last, he stressed not the power of executives but, instead, their responsibilities. (Tellingly, the subtitle of his 1974 magnum opus, Management — basically a compendium of all that was known about the subject at the time — is Tasks, Responsibilities, Practices.) With the 1957 publication of America’s Next Twenty Years, he took his place as the nation’s first “futurist,” a role he returned to time and again, notably in his 1976 The Unseen Revolution: How Pension Fund Socialism Came to America, in which he anticipated many of the problems corporations would encounter in subsequent years as a result of the way pensions were traditionally funded. Once, when my coauthor Warren Bennis praised him publicly for his foresight, Drucker had this surprising reaction: “It was meant as a compliment, but I winced because, bluntly, I was 10 years premature with every one of my forecasts. And that’s not a compliment. That is saying that one has had no impact.”

Indeed, the most problematic part of evaluating Drucker’s work is measuring its impact. As widely read as he is, few executives ever have claimed to manage in his name. His classic 1946 study of General Motors Corporation, Concept of the Corporation (reissued, significantly, in 1972, when GM was first starting to lose ground to Japanese competitors), identified the cultural and organizational problems that would lead to the humbling and eventual nationalization of that once great company. Prophetically, he concluded that “GM is an organization of managers and management...not an innovative company.” It was too impersonal, too addicted to technique, and too concerned with scientific mea­surement and controllable facts “when what is needed is not facts but the ability to see facts as others see them.” His warnings went un­heeded by GM’s leaders, as did so much of his writing by so many other executives.

In 1985, while serving as editor of New Management magazine, I asked six prominent authors to consider Drucker’s entire oeuvre (some 20 books at the time) and to write critical evaluations of his contributions to the discipline and practice of management. I then sent the essays to Drucker for comment, and he complied in his usual style: promptly, coldly, analytically, and somewhat condescendingly. (On more than one occasion in the 1970s and ’80s, when an article or book I had written found its way into print, I received phone calls from Drucker, who, in his patented guttural growl, would tell me how “interesting” my latest effort was — and then go on for a good half hour explaining in painful detail how I had gotten my analysis all wrong!)

In the 1985 New Management retrospective, Tom Peters, having just read Drucker’s 1954 The Practice of Management for the first time, noted to his “amazement and...dismay” that he had discovered therein all the key points that he and Bob Waterman had thought original when they presented them more than two decades later in their best-selling In Search of Excellence. Given that Drucker was the first to have said almost everything there was to say about management, Peters wondered why Drucker’s name was never once mentioned by his professors while he was an MBA student at Stanford.

Harvard Business School professor Rosabeth Moss Kanter ob­served a strange gap in Drucker’s writings about business management that some could call a serious blind spot: He didn’t believe that evil existed, only ignorance. “There is no power, no politics, no greed...no human frailty that interferes with the implementation of ideal practice,” Kanter wrote. But considering the extent, originality, and significance of Drucker’s work — his idealism notwithstanding — Kanter, like Peters, wondered why “there are no Druckerians...teaching in the tradition of the master?”

Doubtless, the reason Drucker’s contributions have never been adequately acknowledged by scholars is a reflection of academic myopia and an aversion to modernity and evolving ideas, rather than of shortcomings in Drucker’s work. In the same issue of New Management, Bennis noted that Drucker himself wondered if he really “belonged” in a university or business school. Bennis concluded that Drucker, much like Alexis de Tocqueville, was not easily pegged and belonged to the grand “world of ideas.…Unless that is understood, we risk placing Drucker in too narrow an intellectual context and will fail to do full justice to his unique contribution.”

As editor of the magazine, I had the last word, arguing that Drucker’s ideas were so pervasive that scholars espoused — and managers practiced — them without recognizing their origin: “Today, indeed, we are all Druckerians,” I wrote.

James O’Toole is the Daniels Distinguished Professor of Business Ethics at the University of Denver’s Daniels College of Business and the coauthor, with Warren Bennis and Daniel Goleman, of Transparency: How Leaders Create a Culture of Candor (Jossey-Bass, 2008).
Share to:
Topics: writers, authors, biographies, ethics, politics
Recommended stories