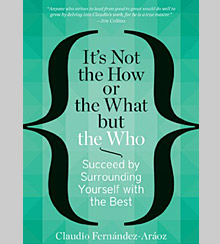 Why do employees typically stay on a silo-bound career path, moving ever upward in the same function or business unit? To start, managers may not want to lose their most talented employees to other parts of the business, and they can be reluctant to take a chance on someone from another division, even if the individual has a great reputation. Employees, too, are often skeptical about a new boss who arrives without the “right background” for the job and “without a clue” about how things work around here. Ambitious, high-potential managers tend to see a direct upward trajectory as the shortest route to the executive suite; lateral moves into other functions or to take on special projects seem like unnecessary detours.

But there’s a real price to pay for leaving this pattern unchecked. As Claudio Fernández-Aráoz points out in the following excerpt from his new book, organizations end up with top executives who do not have the perspective and connections needed to lead a whole company effectively. Read on and you’ll discover a more sustainable approach to leader development, one built on a portfolio of challenging leadership experiences.

An excerpt from chapter 27 of  It’s Not the How or the What but the Who: Succeed by Surrounding Yourself with the Best


Recently, I became aware of the case of a Tokyo-based global conglomerate with a highly diversified business portfolio that could not find even one qualified CEO successor. This company, which stretched into all sorts of industries and markets, offering numerous strategic challenges, should have been an ideal training ground for executives. However, only one of its senior managers had worked in more than a single business line. The top twelve leaders had spent an average of just one year working outside of Japan. And their English language skills were quite limited. In sum, none were suitable candidates to succeed the CEO. The sad thing is that all of them had started off strong: they were engineers with an average tenure of more than twenty years in R&D and product strategy and marketing. But that potential had been squandered.

The fact is that giving people bigger jobs with fancier titles and larger salaries won’t make them better. More complex assignments will. Just look at the leaders of ANZ, the global banking group headquartered in Melbourne. Each time an employee identified as having high potential is promoted, the company makes sure it’s not to the same job on a larger scale (in terms of budget and resources) but to an entirely new set of challenges—maybe it’s relocating to a new country, shifting from a staff to a line role, or moving from a turnaround situation to launching a new business unit. Companies like GE, Unilever, and McKinsey do the same, exposing their highest-potentials to new sectors, new companies, new markets, new situations, and new functions, making themselves leadership factories in the process.

Consider the trajectory of Marcelo Martínez Mosquera. After earning a degree in industrial engineering, he joined Techint, a multinational conglomerate with headquarters in Milan and Buenos Aires whose CEO, Paolo Rocca, also shows up in the Hansen, Ibarra, and Peyer list of the world’s best CEOs at number 23. Immediately recognized as a high-potential, Martínez Mosquera was exposed to new realities and complexities with every single early assignment. He was successively rotated through financial, commercial, marketing, and even production roles that exposed him to not only his domestic Argentine market but also the United States, key European clients, and even the opening of exports to Russia and China. All that equipped him to handle the very critical and delicate task of launching a new business that would compete with the company’s clients. Not surprisingly, he was able to do it and quickly become one of the most senior leaders in the group.

If you want to really help the people around you, you have to make sure they have access to similar opportunities, even if the changes are on a smaller scale. Consider the six leadership passages brilliantly described by The Leadership Pipeline authors Ram Charan, Stephen Drotter, and James Noel: from managing yourself to managing others; from managing others to managing managers; from managing others to functional manager; from functional manager to business manager; from business manager to group manager; and finally, for those reaching the very top, from group manager to enterprise manager. Can you help your people make those transitions? Also look for short-term, project-based assignments that will allow them to stretch and find new muscles. What interesting and challenging work can you give them access to—and then coach them through?

Don’t make the mistake that many corporations do, even in some of the world’s greatest nations like Japan. Remember that potential should trump seniority and that—when it comes to the jobs that help leaders grow most—complexity always beats size.

Topics: china, coaching, leaders, research and development, training
Get s+b's award-winning newsletter delivered to your inbox. Sign up No, thanks