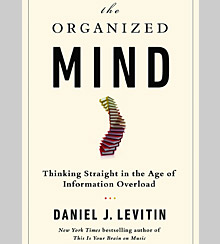 We should be thankful for our ability to multitask. If we couldn’t shift our mental gears quickly, we wouldn’t be able to have a conversation while cooking a meal, listen to music while composing an email, or walk and chew gum at the same time. Life would be dull.

But as neuroscientist Daniel Levitin explains in the excerpt below, multitasking can all too easily become pathological. When we expend too much of our mental energy skipping from one thing to the next, we cut ourselves off from the highest forms of thought our brains are capable of. Conceptual and critical thinking, insight and ingenuity emerge only when we screen out distractions and focus our minds.

Turning off the multitasking instinct is becoming ever more difficult. Our modern technological environment seems designed to scatter our attention. It’s hard to imagine a more perfect distraction machine than a smartphone. But making the effort to escape the informational whirlwind remains essential. A calm mind is a fruitful mind. The owl is wiser than the magpie.

An excerpt from chapter chapter 7 of The Organized Mind:
Thinking Straight in the Age of Information Overload

We all want to believe that we can do many things at once and that our attention is infinite, but this is a persistent myth. What we really do is shift our attention rapidly from task to task. Two bad things happen as a result: We don’t devote enough attention to any one thing, and we decrease the quality of attention applied to any task. When we do one thing—uni-task—there are beneficial changes in the brain’s daydreaming network and increased connectivity. Among other things, this is believed to be protective against Alzheimer’s disease. Older adults who engaged in five one-hour training sessions on attentional control began to show brain activity patterns that more closely resembled those of younger adults.

You’d think that people would realize they’re bad at multitasking and would quit. But a cognitive illusion sets in, fueled in part by a dopamine-adrenalin feedback loop, in which multitaskers think that they are doing great. Part of the problem is that workplaces are misguidedly encouraging workers to multitask . [Stanford professor Clifford] Nass notes a number of societal forces that encourage multitasking. Many managers impose rules such as “You must answer email within 15 minutes” or “You must keep a chat window open,” but this means you’re stopping what you’re doing, fragmenting concentration, Balkanizing the vast resources of your prefrontal cortex, honed over tens of thousands of years of evolution to stay on task. This stay-on-task mode is what gave us the pyramids, mathematics, great cities, literature, art, music, penicillin and rockets to the moon (and hopefully—soon—jet packs). Those kinds of discoveries cannot be made in fragmented 2-minute increments.

It is a testament to our cognitive flexibility and neural plasticity that we are able to go against all this evolution, but at least until the next evolutionary leap in our prefrontal cortex, multitasking leads to not more work but less, not better work but sloppier work. Adding to this, every day we are confronted with new Facebook and Instagram updates, new YouTube videos, Twitter streams, and whatever new technology will replace them in the next year or two. As of this writing, there were thirteen hundred apps for mobile devices being released every day. “Cultural forces, and the expectation that people will respond instantly, and chat and talk and do all these things all at once, means all the pressure is going that way,” Nass says.

The companies that are winning the productivity battle are those that allow their employees productivity hours, naps, a chance for exercise, and a calm, tranquil, orderly environment in which to do their work. If you’re in a stressful environment, where you’re asked to produce and produce, you’re unlikely to have any deep insights. There’s a reason Google puts Ping-Pong tables in their headquarters. Safeway Stores, a $4 billion grocery chain in the U.S. and Canada, has doubled sales in the last 15 years under the leadership of Steven Burd, who, among other things, encouraged employees to exercise at work, through salary incentives, and installed a full gym at corporate headquarters. [Burd retired in 2013.] Studies have found that productivity goes up when the number of hours per week of work goes down, strongly suggesting that adequate leisure and refueling time pays off for employers and for workers. Overwork—and its companion, sleep deprivation—have been shown to lead to mistakes and errors that take longer to fix than the overtime hours worked. A sixty-hour work week, although 50% longer than a forty-hour work week, reduces productivity by 25%, so it takes two hours of overtime to accomplish one hour of work. A ten-minute nap can be equivalent to an extra hour and a half of sleep at night.