It’s been 500 years—half a millennium—since Niccolò Machiavelli wrote The Prince, and for nearly as long, the man and the book have stimulated controversy and debate. The Catholic Church banned Machiavelli’s works in 1559 (putting him in the company of Plato, Aristotle, and Homer). Since then, The Prince, a foundational text in statecraft that served as the basis for the realist school of politics, has been characterized as a “handbook for tyrants” and condemned for separating ethics and politics. 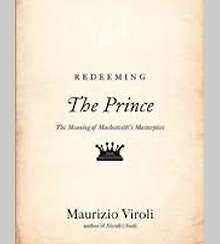 So I was understandably curious when a review copy of Redeeming The Prince: The Meaning of Machiavelli’s Masterpiece (Princeton University Press, 2013) arrived a couple of weeks ago. In it, Maurizio Viroli, a leading Machiavelli scholar and politics professor emeritus at Princeton who currently teaches at the University of Italian Switzerland, makes a strong argument for rethinking widely held assumptions about The Prince.

Viroli suggests that our understanding of the book has been skewed by misinterpretations of its historical setting and by a lack of attention to several of its key sections. As a result, we’ve unfairly demonized The Prince and its author. Machiavelli was calling for a more unified and free Italy, Viroli says, and The Prince was intended to be a handbook for a leader who would undertake the task of restoring the republic—a redeemer, not a tyrant.

Since The Prince has been widely read by business leaders, I asked Viroli if his new interpretation should prompt them to think differently of Machiavelli. Here’s his reply:

“Niccolò Machiavelli’s famous sentence from The Prince—‘So let a prince win and maintain his state; the means will always be judged honorable, and will be praised by everybody’—has been used to justify the acquisition of power and profit in business by any means. It suggests that as long as business leaders can capture and keep market share, the methods that they use are of no consequence. But this is not Machiavelli’s true message.

“The Prince is about the kind of grand politics that open the path to glory; it was written for the founders of new and good political orders and for the redeemers of countries and people. ‘Let no one be surprised,’ wrote Machiavelli, ‘if in speaking of entirely new principalities as I shall do, I adduce the highest examples both of prince and of state.’

“The real lesson that business leaders ought to elicit from The Prince is quite different from the unethical behavior so often ascribed to it. Machiavelli is urging leaders to devote all of their energy to the accomplishment of something really great, of something memorable, not just the pursuit of power or profit. This is the source of enduring glory.

Machiavelli is urging leaders to devote all of their energy to the accomplishment of something really great, of something memorable.

“A true ‘Machiavellian’ entrepreneur or executive would be an innovator capable of creating new and better ways of producing and distributing products and services. In Machiavelli’s view, such a leader might be excused, not justified, if he or she violates the principles of honesty. But only on condition that it is absolutely necessary to accomplish a great deed of innovation that would benefit a great number of human beings, like the ideal prince whose highest value is the good of the people of his country.

“I think Machiavelli would have only very harsh words of censure for the cunning, dishonest behavior so wrongly attributed to The Prince. Just as dishonest politicians without greatness of spirit cause the decline of a country, fraudulent and petty-minded business leaders cause economic decline and poverty. Why have we not yet learned this from history, as Machiavelli has many times urged us?”