Bruce Poon Tip tells a familiar story in the opening chapter of his book, Looptail: How One Company Changed the World by Reinventing Business (Business Plus, 2013). It’s 1997 and Poon Tip’s travel adventure company, G Adventures, is flirting with bankruptcy. He’s miserable and he’s on a tour. Crossing the border from Nepal into Tibet, he walks by a group of monks and one says, in perfect English, “Welcome back.”

“You’ve been here before,” says the monk. 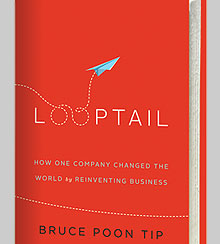 And so have we. Books by entrepreneurs about the companies in which they have invested their lives almost always include that moment of truth when their authors stare into the maw of bankruptcy. I tend to be leery when reading such books—often they are exercises in myth-making, culture-building, and marketing as much as anything else. And I would argue that Looptail fits the bill on all three counts. Check out the book’s website for proof.

But Looptail won me over nevertheless. It is a book about the power of an entrepreneur’s commitment, the drive to create a business that truly reflects its founder’s vision and beliefs no matter how unconventional they may be, and the unwillingness to sell that out even for a boatload of money. How many of us would refuse a US$70 million offer for a company with $80 million in annual revenue?

It is also about the power of social enterprise. “That’s the Looptail: finding your passion and purpose in work and your company, transcending your industry, and paying it forward,” writes Poon Tip.

Now, that’s a boatload of clichés. But it’s also an accurate portrayal of how Poon Tip grew his business. Twenty or so years ago, he went to Ecuador on a research trip—taking a public bus from Quito to the mountain town of Otavalo to visit the market, and then hitchhiking into the countryside. He gets a ride from a guy who shows him the abandoned and deteriorating monastery on his family farm. Poon Tip tells him that if he can repair six rooms, he’ll start bringing in small tour groups in eight months. They shake hands on a partnership that has lasted ever since.

On the same trip, Poon Tip travels into the Amazon jungle where he meets Delfin, a member of the Pimpilala tribe that is struggling to survive. Poon Tip tells Delfin he would like to bring tour groups to visit. Delfin looks around at his village, which has no plumbing or electricity. What must he have thought?  Since then, the tribe has used the money it has earned from 22 years of monthly G Adventures tours to build cottages with utilities, a school, and to send its children to university.

Poon Tip’s approach to structuring his company is just as unconventional as his tours. There is no HR department. Finance handles administration, and there is a Talent Agency and a Culture Club. The business model is built around happiness, but Poon Tip keeps a blank check for $5000 in his desk drawer for any employee who “can hurt his feelings”—a reminder that everyone is free to speak openly and honestly to him.

It’s idiosyncratic, but it works. According to Poon Tip, G Adventures’s revenues have topped $200 million annually. The company, which he started on a shoe string, grew through the meltdown in the travel industry after 9/11 and it grew through the recession of 2008.

The lesson, with apologies to the Bard of Avon: There are more things in business, than are dreamt of in management science.