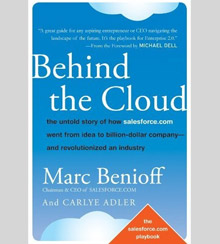 We celebrate the genius entrepreneur — that intuitive hard charger who senses an opportunity, puts the pieces together, opens the doors, and voila! A smashing success. Trouble is, the genius entrepreneur is largely a myth. Successful business founders are smart, no doubt, but what separates their successes from failures isn’t genius. It is the ability to recognize and react to signals that suggest a need to shift strategies.

You see, the only thing you can be sure of when you start a new venture is that your strategy isn’t quite right. Unfortunately you never know exactly what’s wrong. Great entrepreneurs figure this out as quickly as possible and they recognize that course correction is not the same as failure.

Marc Benioff, the founder of salesforce.com, is a great entrepreneur. As this excerpt from his new book, Behind the Cloud (coauthored by business journalist Carlye Adler), explains, salesforce.com’s first profit model had fatal flaws. Had Benioff stubbornly stuck to it, his company probably wouldn’t be here today. But in changing course, he helped power salesforce.com’s stunning success. Remember: There’s no shame in admitting your first strategy was wrong. Instead, try to learn what is wrong as quickly as possible so you can redirect your course toward success.

Excerpted from part 4 of Behind the Cloud: The Untold Story of How Salesforce.com Went from Idea to Billion-Dollar Company — and Revolutionized an Industry

Because of our mandate to target small business, and in what was probably a reflection of the times, a large proportion of our customers in the early days were Internet start-ups. They shared our appreciation of the Internet, they were early adopters of technology, and they were growing at a wild pace. It seemed that our dot-com clients were calling every day to add new subscriptions. Online search site LookSmart went from five subscriptions to fifty in one month. Our business was booming, and it was largely fueled by dot-com fury.

Then, suddenly, everything started to unravel. Many dot-coms, once flush with venture capital money, began to run out of cash. As many of these companies struggled to survive, we had to deal with the ugly ramifications of very serious user attrition. Whereas some of our customers reduced the number of users, others, such as Excite@Home, pulled out entirely and then folded. By October 2001, the crash had deeply affected our business. We were burning through $1 million to $1.5 million every month, and we were severely cash flow negative. The potential for bankruptcy was at hand.

We needed to implement a new strategy to improve cash flow, and we found ourselves in a seemingly disastrous predicament. Investors were spooked, and valuations were appallingly low, making it an ugly time to raise capital. Furthermore, I wouldn’t have wanted to raise money even had this been the best of fundraising times — additional financing would have diluted the value of all of the original investors’ shares.

On the heels of several unfruitful meetings with venture capitalists, Magdalena Yesil, our first investor and a very active member of our board, approached me with an idea. She believed that our monthly billing plan, which was meant to be a low-risk proposition for our customers, was jeopardizing the financial security of our company. Magdalena suggested that we change our strategy to collecting for a year or more up front and offering a discount as an incentive. Her analysis demonstrated that this would solve our cash flow problem, which was largely created by paying our sales reps a commission based on a twelve-month deal, while only collecting revenue from our customers one month at a time. It was taking two to three months to recoup our expenses on each deal — and that was in the best of circumstances.

This was hardly the best of circumstances, though. We were in the midst of the dot-com meltdown and were losing accounts. We realized that many of the accounts we had lost had been with us for less than a year, meaning that we never recouped our expenses. Further, managing billing around a month-to-month customer was, by itself, costing us a fortune. Carl Schachter and Brian Millham, members of our team who focused on business development and sales, had, like Magdalena, come to believe we needed to change the way we structured deals. They investigated what other companies were doing to capture commitment and spent a day with a partner of ours to gain an understanding of how it was securing commitments by selling contracts. Carl and Brian took everything they learned back to salesforce.com and began to consider how it could be adapted to our business.

Although this idea to sell annual or multiannual contracts and to encourage the commitment with a discount may seem like a simple one and may even seem obvious in hindsight, it represented a dramatic shift for our company. Our team was divided as to what we should do; several of us wanted to maintain our no-contract and no-discount policy. After all, we had publically touted these differentiators. Could we suddenly change? Would customers be willing to make this switch?

Ultimately, we needed to make this change in order to survive. We created two factors to justify a discount: the total number of users and the length of the contract. We strived to design a plan that our customers would be willing to accept, by offering existing clients the opportunity to continue with the price of $50 per person per month if they signed an annual contract and paid us cash up front. (We still recognized the revenue monthly, but this approach would cement the customer’s commitment, help with billing and collections costs, and improve our cash position.) If customers preferred to continue month-to-month, the rate would be our new price of $65 a month. Although we thought the plan was fair and attractive, it was nevertheless a great shock to us when about half of our customers immediately agreed to it.

Our customers were willing to accept the change because we had earned their trust and loyalty. Our customers, it turned out, were rooting for us to succeed. We were also established enough by this point that about 20 percent of our new customers accepted the plan right away. Many of these customers said that they were motivated by the price discount, and they believed that paying on an annual basis was simpler than dealing with a monthly billing cycle. Whereas I had always been concerned that customers would feel restricted by an annual contract, it turned out that many of them saw the benefit of an opportunity to lock in favorable terms.

Of course — as we had suspected — there was a fair share of customers who were not pleased with the change. I would even go so far as to describe a handful of them as outraged. Concerned that we would lose these customers and wanting to provide a solution that would quell their anger, we offered to grandfather them in with the old price and month-to-month payment schedule for one year. It was challenging to maintain, but it kept them satisfied, and eventually earned their business.

In an effort to ensure execution of our new plan, we wanted to create an incentive to spur sales reps to close annual deals. “Let’s give sales reps 50 percent higher commissions to sign annual deals,” said Frank van Veenendaal, who had joined us to help build the sales team (and had always hated the no-contract premise). Frank recommended that we pay the reps two months’ worth of sales revenue for every twelve-month contract. Under this innovative new arrangement, sales reps would be motivated by the financial rewards of capturing a larger commitment, and we would still keep ten months of revenue in the bank.

That decision had a significant ramification on our growth. By collecting up front — and offering sales reps a real motivator to ensure we closed multiyear deals — we went from cash flow negative to cash flow positive in less than a year. We made this new structure part of our official compensation plan — and it’s largely why we’ve been able to continue to grow an impressive amount of cash on the balance sheet to this day.