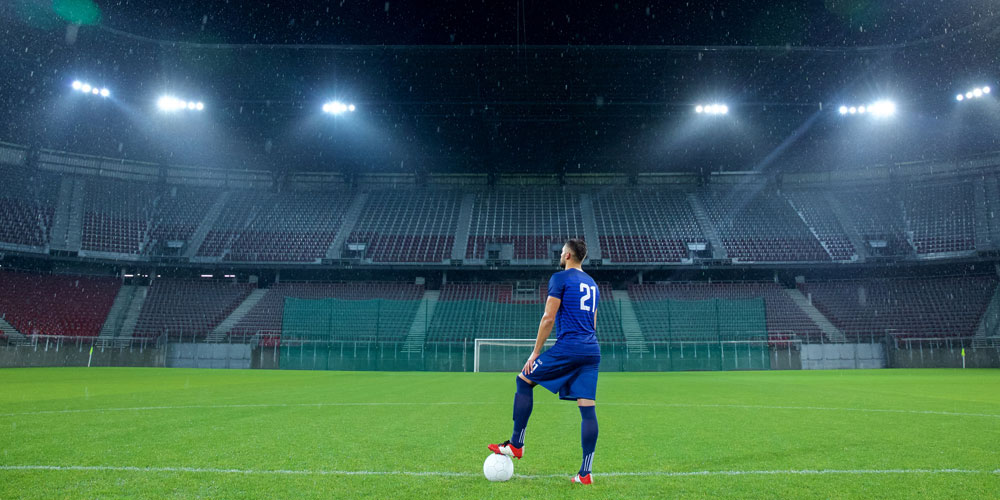 On June 20, Manchester United’s star player Bruno Fernandes scored a late penalty to earn his team a draw against English Premier League rivals Tottenham Hotspur. Because of the coronavirus pandemic, the stands at Tottenham Hotspur Stadium were empty when he took the shot. It was the first of many soccer games to be played behind closed doors, and afterward, Fernandes was asked if it was easier to take the penalty without the distraction of the opposing team’s home fans. “I like the pressure,” he said. “With the crowd, it would be better.”

With fans across the world mostly forbidden from attending sports venues, it’s been possible to compare performances with and without the presence of crowds. In soccer, for example, there have been more goals, more mistakes leading to goals, more penalties scored, and more away wins. In Germany in particular, one analyst described a “negative home advantage,” as away teams, unaffected by a home crowd (and a referee who may give the home team more beneficial decisions), played with a new freedom.

Players and coaches seem emboldened by empty stadiums: more willing to be creative and take risks (and make mistakes) than they otherwise might be.

Could these benefits also translate to the many lines of work that today are being done at home? And how does the lack of an audience affect our own performance? Can we use it to our advantage?

It’s easier to tally goals on a score sheet than productivity on a time sheet, but there are some indicators that a lack of face-to-face office experiences is also having unexpected effects in business — and not all of them bad. One big fear when many companies made the switch was that employees, away from the pressurized environment of the physical office space and with no one keeping an eye on them, would “shirk from home.”

In fact, the opposite happened. The length of working days has increased; digital presenteeism is on the up, and so is productivity. Many people like working from home — and the majority don’t want to return to the office, at least not full-time.

Coaches have also spoken of players who star in training but choke in front of a crowd. Not every player, it seems, is like Fernandes. As Dan Abrahams, a sports psychologist who works with soccer club AFC Bournemouth has said, “More players than you would think are negatively impacted by a crowd.”

Players and coaches seem emboldened by empty stadiums: more willing to be creative and take risks (and make mistakes) than they otherwise might be.

Empty stadiums suit those introverts who, according to Susan Cain, the author of Quiet: The Power of Introverts in a World that Can’t Stop Talking, feel most alive and most capable in quieter, low-key environments. Cain believes introverts flourish with more privacy.

For those who do flourish in front of others, an audience provides a change in the pressure dynamics that affect performance. In front of a crowd, our working mode changes from “threat state,” driven by anxiety, to “challenger state,” where we are more likely “to have a go,” according to Gary Bloom, a sports psychologist who works with the Oxford United soccer club. “The limbic part of our brain is where our emotions live — our fear, our anxiety, our excitement. That part is aroused by fear/threat,” he told The Athletic website. “I don’t think it is going to be as aroused [without a crowd].” So, perhaps performing in front of others gives a chance for the challenger state to take over, and we feel more comfortable taking risks.

A couple of years ago, researchers from Johns Hopkins University put the “threat state” theory to the test. They asked people to perform a task on a video game with and without people watching: Those with an audience performed better.

In the experiment, being observed clearly served as an incentive to do well — so maybe all those Zoom calls do keep us on our toes. It may also be that the relationship between performer and crowd builds community and cohesion, hallmarks of a successful working environment. It was French sociologist Émile Durkheim who coined the term collective effervescence to describe how people build a group identity. Sport certainly does that, as can any shared experience.

The changes imposed on our social connections by the pandemic forced us to find new ways to come together: rooftop musical performances, drive-by protests, and online author workshops, to name a few of the many examples of creative responses to lockdowns. “Emergencies often prove to be the forge in which new ideas and opportunities are hammered out,” wrote Erica Chenoweth, professor in human rights and international affairs at Harvard University, in the Guardian.

Our professional behavior may still be performative, albeit in a virtual space. However, we can take inspiration from sport, and specifically penalty kicks in soccer. The secret to a successful penalty, as Fernandes might attest, has little to do with crowds. It’s more about developing the right mindset and practicing with purpose. As we grow accustomed to new working models, these are the habits that can help build success.