Most successful leaders have little difficulty saying no to a losing deal, to a project that’s wasting money, or to a request that doesn’t align with their priorities. But these same leaders can find it very uncomfortable to speak up when their concerns are less cut-and-dried or when their organization is hell-bent on pursuing a plan. In certain situations, it can feel politically risky to hesitate or ask too many questions. Even with their direct reports, many leaders find themselves putting off the difficult conversations needed to address issues such as drifting standards, inappropriate behavior, or emerging bad habits.

But, as difficult as it can be, saying no is often the key to effective leadership. Without the ability to push back when needed, you run the risk of “commitment drift”: promises made to customers or employees, or to promote safety, specific values, financial discipline, or social and environmental responsibility are eroded incrementally, without anyone really stopping to think about the consequences. As Joseph Fuller and Michael C. Jensen pointed out in their 2002 paper “Just Say No to Wall Street: Putting a Stop to the Earnings Game,” saying no to such dysfunctional momentum can be your best strategy for helping your company succeed as well as living your values. 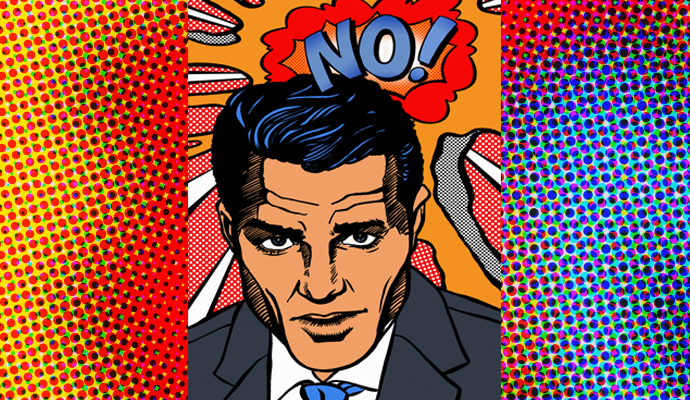 The first step in building your capacity to say no is to recognize some common situations that should raise a red flag. In the following five moments, it is critical to pause and make a considered choice, based on a thorough understanding of your options and what is at stake.

1. You are being pushed to make a promise you can’t keep. Although people may be disappointed in the short run, it is far better to retain others’ trust and your own credibility by being realistic about what you can deliver. Rather than a blunt refusal, try using William Ury’s “positive no” method: Affirm your commitment to a larger “yes,” and propose alternative ways they can get to their goal. For example: “I really would like to say yes. But here’s the risk I see.... What if we were to try x instead?”

2. Something sticks in your craw. People often experience nagging doubts or gut reactions when situations are slipping into unhealthy compromise. If something doesn’t feel right, take a moment to pause and reflect. What is bothering you about the situation? What are the larger effects of the actions being taken? Moreover, if you feel fine but someone you respect is hesitant, take a moment to find out what smells “off” to them. Once you are clearer on the issue at hand, you can check the data to see if there is cause for concern.

3. You feel you have no choice. “You can’t say no,” leaders often tell me, feeling intense pressure to meet expectations. But the fact is, we always have a choice — it just may have high stakes. It is part of our responsibility as professionals to recognize when there is something more important than a project or deadline. Recall just one of the many people working on Deepwater Horizon who went along with the decision to cut corners, saying, “Who cares, it’s done, [it] will probably be fine.”

4. The “plan” has taken on a life of its own. Once people have committed to a direction, they naturally tend to persist, even in the face of evidence that they will fail. To counteract such momentum, leaders in healthcare, aviation, and other fields have developed protocols that prompt decision makers to briefly pause and revisit the data. You might ask your team to list the assumptions behind their plan, then propose a quick test to double-check the facts. One leader I worked with lobbied for an additional market study before a product launch, which helped her leadership team recognize and avoid a failure in the making.

5. You see a dangerous trend in the works. Scandals and catastrophes often begin as small trade-offs or compromises that add up over time. If you notice a pattern of incremental decisions that could undermine safety, quality, data security, customer focus, or ethics, take a step back and check on the cumulative effects. Will the decision streamline a process and eliminate waste or are you flirting with a tipping point? For example, the head of customer service of a health-conscious food company noticed that leaders were spending more time on marketing messages, and less on production processes and quality. They began receiving more customer complaints, but leaders brushed them aside. Eventually, the company suffered a serious product recall that devastated their brand image, and from which it took years to recover.

Scandals and catastrophes often begin as small trade-offs or compromises that add up over time.

Being prepared to recognize and act on these moments of truth makes it less likely that you will blow by critical decision points without giving them the attention they deserve. The fact is, it only gets harder to speak up if you wait. And, as you practice saying no or raising questions constructively, you increase your ability to exert a positive influence on your organization.

For example, one highly respected manager I know had watched her team talk about being collaborative while continuing with negative, antagonist behavior outside of their meetings. About halfway through one meeting, she took off her employee badge and laid it quietly in the center of the conference table. She said that she didn’t want to continue if the team wasn’t ready to truly commit to the new way of working. For a moment, people were startled and silent. But then they began speaking more honestly about their own hesitations. Months later, in another part of the company, I heard the story of how this leader’s no had inspired her peers to step up to real change.