Bottom Line: Companies that winningly reposition their brands tend to do so by anticipating market trends and overcoming or minimizing common challenges.

In the early 2000s, luxury clothing company Burberry faced a dilemma. The firm’s traditional trench-coat aesthetic wasn’t appealing to young consumers, but breaking away from such a well-recognized brand image (which dated all the way back to 1856) risked alienating an established customer base. Burberry successfully overhauled its brand by introducing new clothing lines that appealed to a wide demographic, backed up with strategically coordinated marketing campaigns and fashion shows that harked back to its iconic look. A year later, Burberry posted a 46 percent boost in retail sales, and it remains one of the world’s most valuable brands today.

But this kind of repositioning can be perilous. It can soak up a company’s precious resources and capital only to dilute, or even destroy, its long-standing, carefully crafted brand value. The burgeoning interest in rebranding—or deliberately discarding your initial corporate image to forge one that’s more appealing to modern consumers—dovetails with the increasingly turbulent nature of modern business. Accordingly, a new study outlines the pitfalls confronting such initiatives and the avenues companies can use to successfully reposition their brands.

The most salient finding: If you’re going to rebrand, don’t do it piecemeal. Go all in and reform in a proactive, carefully calculated manner. “Greater performance benefits are usually associated with bigger, bolder corporate re-visions that are well founded and anchored to stakeholder needs and input,” the authors write. “In contrast, narrow corporate brand re-visions often generate small performance benefits.”

If you’re going to rebrand, go all in.

The authors found that rebranding typically occurs in three distinct phases: the re-visioning process, in which stakeholders come up with a new definition and direction for the brand; internal activities that encourage employees and managers to buy into the revised model; and the introduction of the new brand image to consumers, via integrated marketing campaigns and coordination with other partners.

Leadership plays a crucial role throughout this process. Chief executives with prior experience leading companies in a new direction have a greater chance of presiding over successful rebranding campaigns at their current firms. Top executives who listen to their stakeholders are also more likely to enact positive brand reforms, compared with leaders who favor a more authoritarian, top-down approach. Indeed, rank-and-file employees represent a crucial, but too often ignored, aspect of corporate rebranding, the authors found. When frontline employees are invited to participate and buy into the new approach, they can positively influence friends, family, and other social contacts to establish the public’s new attitude toward a brand.

But companies also face several obstacles. Among the most hazardous: devising a rebranding plan based on boardroom sentiment alone; conducting inadequate research into the rebranding process; failing to acknowledge or assuage stakeholder concerns about the reorientation; and taking an overly conservative approach to recasting the brand’s image. Many of these barriers can appear during any of the three rebranding phases, the authors note ominously, and if left unchecked or undetected, they can spread like a virus throughout the entire process.

One of the authors’ most intriguing findings is that positive rebranding efforts were characterized by success across multiple phases. In other words, it’s not enough to get it right at the beginning or save the project at the end. And leadership, in particular, must remain committed to the project throughout; flip-flopping in the executive suite on the desired rebranding outcome and the way to achieve it is the surest way to derail a firm’s best-laid plans.

Finally, firms tend to successfully pull off rebranding projects when they launch them out of a sense of opportunity, not necessity. If the rebranding effort is essentially reactionary—perhaps because the brand has been driven into a corner by competitors, or is widely perceived as stale by consumers—the project is far more likely to flounder or fail. And time is a prized asset, so being able to make decisions about rebranding efforts in a noncrisis context, carefully weighing the investments and resources required, is the best advantage leaders can have. For that reason, branding managers should begin conceptualizing their rebranding initiatives long before they ever start them—by anticipating market trends and looking for a favorable time to reposition.

Source: Corporate Rebranding: An Integrative Review of Major Enablers and Barriers to the Rebranding Process, by Dale Miller, Bill Merrilees, and Raisa Yakimova (all from Griffith University), International Journal of Management Reviews, Jul. 2014, vol. 16, no. 3 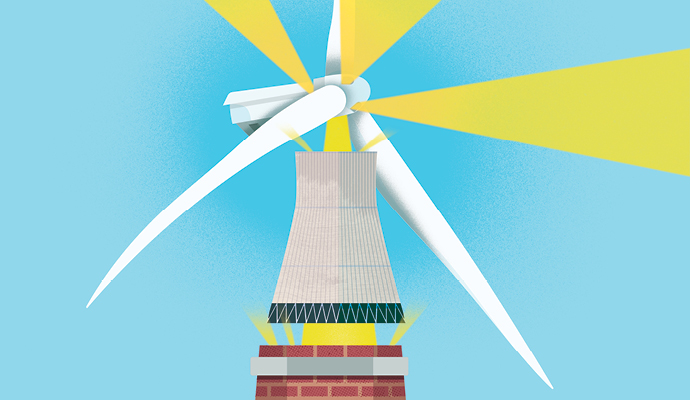 Mark Carney on a values-led economy
The former governor of the Bank of England argues for a major overhaul of the financial system to confront global challenges.
by Jakob von Baeyer
Digital issue