We’re often told that entrepreneurship and innovation are the keys to social and organizational prosperity. But how do you nurture those qualities on a large scale? This is a question that Krisztina “Z” Holly is seeking to answer.

Instead of propounding theories and conducting studies, Holly has turned her career into something of experiment in entrepreneurship and innovation. In the 1990s, Holly, who holds two engineering degrees from the Massachusetts Institute of Technology, worked at a number of high-tech startups. She cofounded Stylus Innovation, which brought the first Microsoft Windows-based telephony development tool to market and was acquired by Artisoft in 1996.

Most recently, Holly has been exploring the role of government in promoting entrepreneurship and innovation. She served as an advisor to the Obama administration and chair of the Global Agenda Council on Fostering Entrepreneurship for the World Economic Forum. Currently, she is an inaugural entrepreneur-in-residence for the City of Los Angeles Mayor’s Office, with a mandate to identify ways the city can help entrepreneurs start businesses and create jobs.

I asked Holly about the books that she has found most helpful in her career. She called out three titles, all from outside the business genre, that highlight the importance of reaching beyond boundaries, understanding psychology and social dynamics, and inspiring others in the quest to stimulate organizational entrepreneurship and innovation.

A New Culture of Learning: Cultivating the Imagination for a World of Constant Change, by Douglas Thomas and John Seely Brown (CreateSpace, 2011). “If you are trying to innovate, this book is valuable for many reasons. It shows how to create an environment that maximizes learning, thrives on change, and instills iteration, experimentation, and collaboration as organizational values. It explains the importance of tapping into the full spectrum of knowledge both inside and outside the organization, through techniques such as peer-to-peer learning and customer engagement. And it emphasizes the need for leaders to establish a shared vision to shape and direct innovation without stifling it. Some of the specific tools described in the book have become dated since its publication in 2011, but this only reinforces the authors’ point: When technological change is fast-paced, your learning paradigm becomes crucial.”

Impro: Improvisation and the Theatre, by Keith Johnstone (Faber & Faber, 1979). “Reading this canonical book on improvisation reveals a deep-thinking author who is seemingly unfettered by social convention. A book about teaching actors might seem pretty far removed from the business world, but any leader can benefit from applying the techniques and the insights into social dynamics that Johnstone used to unleash the confidence, imagination, and spontaneity of his students. He’s really preaching a leadership mind-set that is wide open to new ideas and to encouraging other people to open up, too. Achieving that attitude involves being true to ourselves and helping the whole team get past fears about judgment and failure. For instance, Johnstone says people need ‘a guru to give permission to allow forbidden thoughts into their consciousness.’ And then he shows how leaders giving voice to their own weird and crazy ideas can give a voice to others. That is the real value of this book: It helps you become a leader who can harness human nature and unlock the creative potential of other people.”

Endurance: Shackleton’s Incredible Voyage, by Alfred Lansing (McGraw-Hill, 1959). “This is the definitive book on Shackleton’s ill-fated expedition to Antarctica in 1914 and my favorite adventure story. You may remember the 18-month saga that began when Shackleton’s ship got trapped in the ice. After a brutal winter, it broke up and sank. Shackleton and his men set up camp on the ice. When the ice broke up, they sailed more than 300 miles in lifeboats to an uninhabited island. Then Shackleton took a small crew, sailed another 800 miles to South Georgia Island, and marched 36 hours nonstop across ice-covered mountains to a whaling station. And then, most amazingly, without any hesitation or recuperation time, he immediately enlisted help and set off into the teeth of the approaching winter to rescue the rest of the members of the expedition. It was a miracle of perseverance and motivation, and a powerful example of how people respond when their leaders build a sense of deep trust and actually step up and make personal sacrifices. The fact that this failed expedition came to be celebrated as a magnificent victory also illustrates how our greatest accomplishments sometimes come after we are forced to give up our original goal.”
Share to:
Topics: best books, recommended reading, required reading
Theodore Kinni 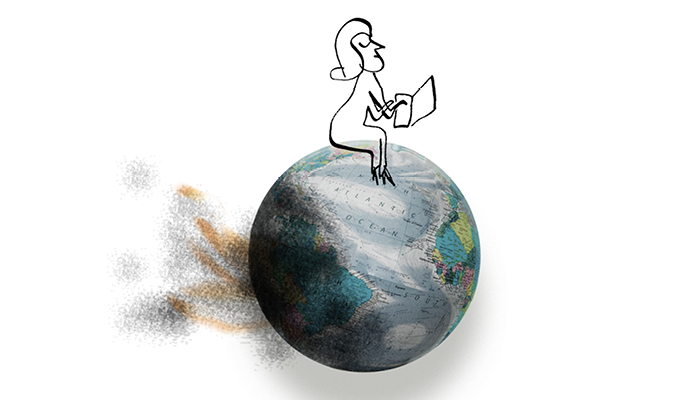 Best Business Books 2021: The right time to yell “fire!”
A collaborative manifesto by academics urgently calling for change is the most provocative technology book of the year.
by Paul Barbagallo