Investigative reporting is the pinnacle of journalism, and has been ever since the early 20th century when writers like Ida Tarbell, Lincoln Steffens, and Ray Stannard Baker exposed systemic corruption in the United States and changed the nation. They helped bring down business trusts, provided the impetus for much-needed regulation and oversight (in Steffen’s case, the establishment of the Federal Reserve System), and created political platforms for reformers, such as Teddy Roosevelt, who named them muckrakers. You’d think there would be more reporters today following in their footsteps. 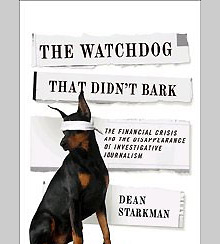 And yet, less and less investigative—or accountability—reporting is being published, according to Columbia Journalism Review (CJR) editor and fellow Dean Starkman. In his fascinating, if somewhat flawed book, The Watchdog That Didn’t Bark: The Financial Crisis and the Disappearance of Investigative Journalism (Columbia University Press, 2014), Starkman points to the subprime lending meltdown of 2007 as a primary example of his contention.

Although there has been no lack of high-profile investigative reporting since subprime lending imploded and caused a global recession, an examination of reporting on the subject in the years before the crisis tells another, rather curious, story. According to research that Starkman conducted at CSJ between 2004 and 2006—the period in which the worst lending excesses occurred—“mainstream accountability reporting [was] virtually dormant. The watchdog, powerful as it was, didn’t bark when it was most needed.”

But there’s more to the story. CSJ’s research also determined that it was “during the years 2000–2003—the period before the true madness engulfed the lending industry—that the best business investigations were done.” So, mainstream journalists were investigating the subprime story, but stopped just as it was becoming an epic.

Mainstream journalists stopped covering the subprime story just as it was becoming an epic.

What happened? “As regulation left the field, journalism did, too,” writes Starkman. That’s because the two activities go hand in hand: “Regulation provides raw material for stories—indictments, settlements, white papers, and testimony. Journalism investigations provide the basis for a substantial number of law enforcement and regulatory investigations.” From 2000 to 2003, there was a large amount of regulatory activity focused on predatory lending; from 2004 to 2006, the federal government “not only failed to adequately regulate the mortgage market, but actively fought attempts by others to do so,” Starkman says. Without the muck, the muckrakers were out of business.

This makes sense to me. Everything I’ve read on the crisis suggests that deregulation opened the door to systematic corruption. It wasn’t a few bad lenders or a bunch of dishonest homeowners who blew up the economy. It was Adam Smith’s invisible hand that strangled us.

The flaw in The Watchdog That Didn’t Bark is that it pays short shrift to the role of deregulation in the subprime debacle. Starkman’s real target is business journalism, which he says has neglected its “core function” of accountability reporting. He argues that the collapse of the traditional media business models siphoned away jobs and other resources supporting investigative reporting, while “CNBCization” created an industry-wide drive for news reporting as opposed to news making.

These things have happened. There is too much reporting and not enough investigating. But, as much as I admire Starkman and his book, I don’t think the core function of business journalism has ever been accountability reporting. Its primary purpose has always been delivering information about economies, markets, industries, and companies. Mainstream business journalists usually are, as Starkman ungenerously calls them, “messenger boys.”

Further, muckrakers usually aren’t employed by big city newspapers or mainstream business journals. Tarbell, Steffens, and Baker wrote for McClure’s, a literary magazine. Starkman himself says that the few journalists who covered subprime lending before it brought down the economy were “outsiders.” And one of best books of investigative reporting that I’ve seen in quite a while, The Meat Racket: The Secret Takeover of America’s Food Business (Simon & Schuster, 2014), was also written by an outsider. Christopher Leonard first got onto this story as an agribusiness reporter for the Associated Press. However, he developed and wrote this book under the auspices of the New America Foundation, a nonpartisan public policy institute, which gave him a fellowship. It’s mainly about Tyson Foods—and if you like eating chicken, it will definitely put you off your feed.

So, if you think muckraking is dead or even on its last legs, The Meat Racket is proof positive that it’s very much alive. The big question is whether or not there are any reformers and regulators left who have the will and the strength to pick up the ball and run with it.