In the opening paragraph of his newest book, Scott D. Anthony describes being in Bangalore, with a stranger’s razor at his neck. No, it’s not a thriller, at least not of the Ludlum and Clancy variety. The book is The First Mile: A Launch Manual for Getting Great Ideas into the Market (Harvard Business Review Press, 2014), and Anthony, in his capacity as head of Innosight’s venture capital (VC) arm, is considering an investment in a new concept for a chain of barbershops. 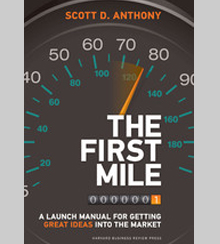 Anthony likes the idea—a single-chair kiosk manned by a professional barber in a market where there are few options between a high-end salon and a chair on the side of a road—and he recommends the investment. Four months later, the startup fails: A single-chair shop can’t do the necessary volume, and the best barbers leave to start their own businesses.

It’s just another wreck on innovation’s first mile from idea to reality. According to the statistics Anthony cites, 75 percent of VC-backed startups fail to return their investor’s capital; 95 percent fail to hit their financial targets. Of more than 10,000 VC-financed software startups since 2003, only 40 are worth more than US$1 billion. More than 50 percent of companies don’t survive to their sixth birthday.
I asked the innovation expert to describe the biggest pothole in this stretch of road. “The single biggest challenge facing innovators in the first mile is maintaining the appropriate balance between thinking and doing,” he replied.

More than 50 percent of companies don’t survive to their sixth birthday.

“Either end of the spectrum is dangerous. At one extreme is ‘paralysis by analysis.’ Too many innovators create elegant pieces of Microsoft fiction. The Excel spreadsheet features ‘what if’ analyses and pivot tables that would rival those created by a seasoned investment banker. The PowerPoint document is stunning, with charts and visuals comparable to Al Gore’s award-winning presentation on climate change. And the Word memo summarizing it all features prose that is so lucid that somewhere Malcolm Gladwell is shedding a tear. The plan looks airtight on paper, but in reality, it is incredibly brittle. As Intuit’s Scott Cook once quipped, ‘For every one of our failures, we had spreadsheets that looked awesome.’

“The other extreme is doing without thinking. Unfortunately the Lean Startup movement, popularized by Steve Blank and Eric Ries, has been twisted by some of its followers into a viewpoint that all thinking is worthless. That’s dangerous, because innovators can waste a lot of time and money discovering things that the world already knows. Or they can prematurely scale a business before they have figured out key elements of the business model, leading to a deadly spin-out.”

The methodology that Anthony offers in The First Mile is designed to enhance the odds of startup survival. Based on his experiences as an innovation consultant to large companies and as an investor in startups, it’s summed up by the acronym DEFT:  document, evaluate, focus, and test. “Innovators should take the time to document and evaluate their ideas comprehensively, while remembering that no business plan survives first contact with the marketplace,” explains Anthony. “They should view themselves as strategic scientists whose job is to focus on the most critical uncertainties, and test rigorously and adapt quickly.” This practical and concise book includes checklists, tools, and tips for each step.

“Success in the first mile comes from striking a balance between the two extremes of thinking and doing,” Anthony concludes. “Innovators should be structured and thoughtful, but with a clear bias to action. The overarching goal is to find the magic ingredients behind every great idea: a compelling solution that targets a deep need in a way that creates value. The first mile can be both promising and perilous. The right approach makes all the difference.”