We’ve been treated to several insider accounts of Harvard Business School (HBS) over the years. Robert Reid’s Year One: An Intimate Look Inside Harvard Business School, Source of the Most Coveted Advanced Degree in the World (William Morrow, 1994) and Philip Delves Broughton’s Ahead of the Curve: Two Years at Harvard Business School (Penguin Press, 2008) covered the experience from the student’s perspective. But Michel Anteby’s Manufacturing Morals: the Values of Silence in Business School Education (University of Chicago Press, 2013) is the first I’ve seen that describes HBS from a professor’s point of view. 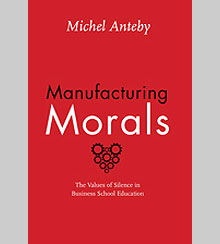 Anteby, an associate professor of organizational behavior, turns his experience of being hired by and teaching at HBS into an ethnographic study that explores how the “way we do things around here” is communicated to the faculty—a highly skilled and highly independent workforce. In doing so, he’s written a book that works on several levels.

First, Manufacturing Morals is a fun read. It’s packed with stories about what it’s like to teach at a leading (arguably, the leading) business school. As you might expect, the standards for faculty at HBS are high, and everything from how pictures get hung on office walls to what professors wear reinforce those standards.

Second, the publication of Anteby’s study is timely in light of Jodi Kantor’s New York Times article about the ongoing effort to promote gender equality within the school. It’s interesting that with all the attention paid to how things are done at HBS, its aggressively masculine student culture, the performance gap between male and female students, and the dearth of tenured female professors has only just begun to be addressed.

Finally, Manufacturing Morals is useful as a guide to creating corporate culture via “vocal silence.” Anteby finds examples of vocal silence at work throughout HBS, and thinks it can be a particularly effective means for communicating organizational mores. I asked him to explain the seemingly oxymoronic concept, and how companies can use it:

‟A few days ago, I was waiting for a city bus across from Harvard Business School. A staff member I know slightly arrived at the bus stop. We saw each other, exchanged greetings, and she immediately added that she was surprised to see a professor using public transportation. Her surprise was understandable: it’s not common to see faculty waiting for buses. But by voicing her surprise, she was also indirectly cueing me that I might want to rethink my choice.

In her view, professors should have more important items to attend to, making their life too busy to waste time at a bus stop. And to be quite honest, she was right. The wait might not have been the best use of my time!

If HBS wanted to clearly signal this norm to faculty members, it could state in writing that we were forbidden to use public transportation. Such a statement would, of course, raise eyebrows. By contrast, when an organization does not say anything about how a member should behave, silence prevails. In this silence, employees are implicitly asked to make a call or pass a judgment with little direct guidance from higher authorities.

Silence becomes vocal when it is embedded in a context rich with indirect signs about how to behave. The surprise voiced by the staff member about my presence at the bus stop was an indirect sign about the value of faculty members’ time and the emphasis placed on their productivity. She was strongly suggesting to me what I should be doing. Thus, vocal silence allows organizations to instill rather than impose morals.

Let me translate this to a corporate setting. Suppose that a major retailer wanted to instill a spirit of teamwork among its front-line staff. One course of action would be to initiate a program of formal training and issue step-by-step directives instructing employees how to play nicely with their colleagues. A vocal silence approach, by contrast, might establish a system of bonuses for high-performing teams, and then give each team greater control over hiring and promotion within their ranks. The team-based bonuses are the vocal cues that signal employees to value teamwork; by relinquishing a degree of control over personnel decisions, management provides the silence in which employees can enact these morals.

Often leaders are inclined to explicitly voice what proper conduct entails. My hope is that this book will encourage them to consider giving vocal silence a try. Such silence is not for all people or all occasions, but its flexibility and ambiguity can lead to lasting effects on individuals’ behavior.”