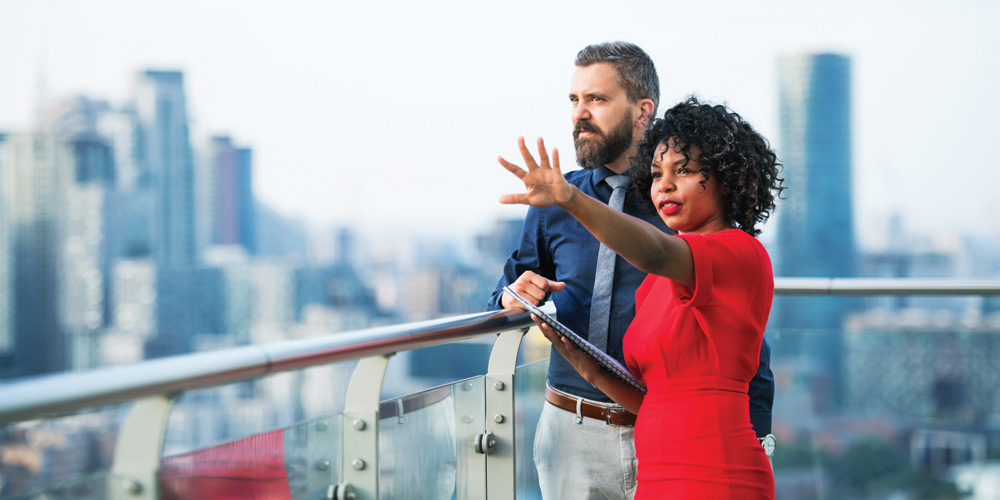 What gets both business-minded consultants and ideas-oriented creatives up in the morning? It starts with a C — and it isn’t coffee or chai.

Rather, more than anything else, each group loves a challenge. Consultants and creatives often think of themselves as being at odds with one another — or, to use another c-word, in conflict. But it doesn’t have to be that way. And in reality, this conflict is just a matter of perception. In most cases, each group simply has different ideas about how to solve a problem.

There’s a lot of talk in organizations about bringing business and experience concepts together. And with good reason — companies that can master this trick can command up to a 16 percent price premium over their competition. But the design of business experience is often done poorly, without real purpose or for show. And just as often, business-driven companies acquire creative agencies — and then proceed to keep operating in silos. The truth is, both consultants (whose livelihood depends on finding solutions) and creatives (whose realm is creating experiences) want to solve problems. They both want to be a part of something bigger and leave things much better than they found them.

In companies that are bent on solving problems the right way the first time, creatives and consultants should be best friends. By discarding the old adversarial playbooks, they can, as they work as part of larger teams, together write a new one — featuring the Four Cs — that can be followed now and into the future.

It’s not a competition

It’s up to leaders of any organization to foster the creative–consultant relationship and make sure the two are working toward the same goal. I’ve always found that while they might roll their eyes at each other, each group comes to realize — pretty quickly — that it needs the other in order to properly execute on business strategy. Neither side owns the big idea or even the individual pieces of an initiative. Instead, both groups must contribute equally from ideation to execution.

Creatives and consultants often make things more complicated for themselves because they’re not paying close enough attention to what’s really going on. They’re focused on the task and can miss the nuances of group dynamics or the little details that tell the real story of the challenge and solutions. If you’re leading both groups together, the Four Cs can help you unite the two sides and remove the hurdles that can trip up a great opportunity.

Projects that have blended creatives and consultants in the past have probably gone something like this: The business side specs out a project and wins over the client. Somewhere along the line — but rarely at the inception — creatives are brought in to add their insight. But they see the solution differently than the consultants. There’s friction. Disagreement. It’s never really resolved. The end result is something neither side feels awesome about.

When previous projects have been painful, it’s no wonder that the next partnership often starts from an adversarial place. That skepticism gets anchored to the present, and justifiably so. We know from experience that grandiose promises of transformation can break down in the execution.

It’s up to leaders to set a new tone — to encourage both sides to let go of the way it’s always been, or of that last bad experience. Leaders must convince employees to push aside preconceived notions, to let go of the assumptions that consultants are bottom-line-focused or that creatives aren’t concerned with practicality or viability. Instead of tolerating the harboring of these ideas or past resentments, leaders should bring creatives and consultants to a new point of reference, one that allows them to view every challenge on its own merits, and to pull out the business and human elements that make the work meaningful, believable, and actionable — for everyone.

Clarity: Create a business strategy that everyone can get behind

It doesn’t help that leaders who manage creatives and consultants are often either a creative or a consultant. You need a new breed of leader who can be both. As a start, it’s critical to look beyond your world view — or you’ll have trouble creating unity among your diverse staff. Indeed, this is an issue, with 86 percent of executives telling Strategy&, PwC’s business consulting group, that their strategy is not articulated often enough into specific action. Why? Because many leaders have trouble inspiring staff, and many executives don’t have enough confidence in their own authority and permission to take risks to reprioritize people, goals, and budgets.

A company’s business strategy must start at the top. And usually, it must start from the right half — that is, the creative part — of the organization’s brain. But although this side might develop the vision, it’s the left side — the get-your-hands-dirty analytical consultants — who must translate the strategy into success. For leaders to turn skeptics into believers, they’ll need to create a tangible plan that articulates a relatable vision for the future.

The new mode of working starts with one project — and you’ll need to be hands-on to guide the process. Often, the sort of change in the way people work has to be done once in order for everyone else to believe in it. Start by making sure everyone understands the purpose of a project and that each side is truly hearing the other’s perspective and ideas. You can’t fake this cultural change — you have to work at it and remain committed to bringing together creatives and consultants to solve problems. Without consistency, you won’t create cultural change.

Relationships become combative when teams are disconnected or uninformed. Although everyone wants to make their company better, it can be frustrating to work with groups outside your own to get things done. One team might not understand how other departments work. Processes might be different. Protocols for problem solving between two groups could be vastly different. It’s hard to break down silos when they’ve been in existence for so long.

Luckily for you, disconnected leaders, siloed teams, and mismatched goals are easy to identify and get ahead of, as early as your first kickoff meeting. If you see a disconnect between your creatives and your consultants, then it is up to you to build quick consensus by clearly and empathetically articulating your vision.

Disconnected leaders, siloed teams, and mismatched goals are easy to identify and get ahead of, as early as your first kickoff meeting.

Start by creating a safe and productive environment. Yes, that’s often easier said than done. But it’s the lynchpin of the uniting of creatives and consultants. Proper collaboration takes creativity and a certain type of business acumen and management skill in order to validate all groups. Consider a project that PwC worked on with the Make-A-Wish Foundation, which aimed to fund 17,000 wishes by 2020. In order to do that, it needed to come up with more innovative fundraising ideas than the traditional cash collection and regionally limited campaigns. Rather than have the creatives or the consultants figure it out on their own, we brought them together — along with people from different teams — into the same room to share ideas in an open and honest way, from the very beginning. That changed the tone and reinforced the idea that we work together. We leveraged strategic facilitators not just to launch the project and help with milestone deliveries, but also to smooth out the rough edges, from personality to business hiccups.

The discussion produced some fantastic results — and the effort was a success. The group moved to more personal storytelling and opened new avenues for awareness and donation, which paid off in increased awareness and fundraising.

Confidence: Give people the belief that they can execute

Here’s another reason that it’s crucial to bring creatives and consultants together from the start. According to research from PulsePoint Group, 84 percent of companies fail at digital transformation, which means most leaders have worked on transformation projects that went nowhere or didn’t live up to expectations. The lack of accountability at the start of a project often casts a black cloud over the whole engagement. There’s also the idea that a challenge won’t be executed with the same integrity in which it was conceived, because teams aren’t working as they should and handoffs get muddled in an epic game of telephone.

To help overcome this, teams need to develop the confidence to execute. First, creatives and consultants need to be supported by a network of colleagues who help bring the work to life. Leaders must look at their technology teams as partners in the process, instead of just the group that implements an idea. It’s also important to fill any talent gaps on the team straight away in order to keep the momentum moving. Finally, get everyone on the same page from Day One — if your goals aren’t aligned across groups and functions, all the planning and BFF-ing in the world won’t help.

With everyone on the same mission, consultants can quickly gather information and address dependencies, while creatives can provide a narrative of the journey. When technology skills or knowledge gaps prevent creative thinking, give people permission to prove a solution. Don’t worry about having too many people on a project — that’s often a good thing when it involves business, experience, and technology teams. It reinforces accountability and, at the same time, removes barriers.

The speed of change is forcing creatives and consultants to collaborate from idea or project inception through execution. One group can’t come up with the best solution on its own. Instead, leaders need to bring together people with diverse perspectives and work toward a shared goal. If they can do that, success will be delivered faster and with more impact. The divide between creatives and consultants is closing, but it’s up to leaders to coach this change across the finish line.