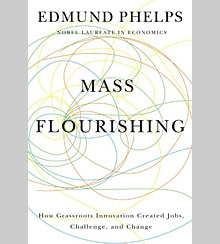 Everybody’s got their own prescription for innovation—an education system that emphasizes science and mathematics, regulation-free markets, more patent protection, less patent protection, you name it. So I was curious to read what Edmund Phelps, a Noble laureate in economics and a professor at Columbia University, had to say on the subject in his new book, Mass Flourishing: How Grassroots Innovation Created Jobs, Challenge, and Change (Princeton University Press, 2013).

In the book, which is more akin to classical economic sociology than straight-up economics, Phelps examines how and why the national economies of England, France, Germany, and the United States pulled away from the rest of the world in the 1800s. He pegs the growth of these first modern economies to a new dynamism, which he defines as an “appetite and capacity for indigenous innovation.” This dynamism, he says, wasn’t the result of the “headline inventions” of the Industrial Revolution (such as spinning machines, locomotives, and iron mills); instead, the inventions were a result of the dynamism. And the source of the dynamism? Phelps says that it was the mass flourishing driven by societal values, such as individualism, curiosity, and creativity, which gave rise to a capitalistic economy.

This is reminiscent of the late David S. Landes’s work. In The Wealth and Poverty of Nations: Why Some Are So Rich and Some So Poor (W.W. Norton, 1998), Landes made the controversial argument that the West’s cultural mores were a primary enabler of the Industrial Revolution and its economic rise in the 1800s.

I don’t buy Phelps’s line of reasoning hook, line, and sinker partly because, like Landes’s, it starts to devolve into something that sounds a lot like a dogmatic political argument to me. But I do find his values-driven view of national prosperity fascinating—and applicable to corporate and personal prosperity. If innovation and the prosperity it yields stem from the values to which we subscribe as individuals, organizations, and nations, it stands to reason that we should be paying a great deal of attention to the particular values we adopt and espouse.