A lot of people watched the World Cup in Brazil this past month. The final numbers won’t be in for a while, but with record-breaking viewership for the first round of matches and a big bump in the U.S. audience, it’s a good bet that the 2014 Cup eclipsed the more than the 3.2 billion viewers (nearly half the people on earth) who tuned in at some point or another during the 64 matches in 2010. It’s also a good bet that Ignacio Palacios-Huerta, a professor at the London School of Economics and Political Science, is one of very few soccer fans who watched this year’s matches for insights into perverse incentives,  market efficiency, and other economic concepts. 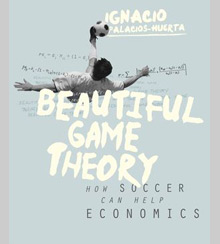 What can the beautiful game tell us about the dismal science? As Palacios-Huerta explains in Beautiful Game Theory: How Soccer Can Help Economics (Princeton University Press, 2014), soccer—and indeed many other professional sports—is a terrific laboratory for testing economic theories. “There is an abundance of readily available data, the goals of the participants are often uncomplicated (score, win, enforce the rules), and the outcomes are extremely clear,” he says.

“There is an abundance of data, the goals are uncomplicated, and the outcomes are extremely clear.”

Take incentives, for instance. We’re often warned that incentives can have unexpected consequences, but it’s tough to isolate the effects of an incentive—such as stock options, for instance—in the business world. Are senior executives neglecting the long-term well-being of their firms to bump up the value of their options in the short term, or is something else going on? Are managers sabotaging one another to boost their own performance in forced ranking systems or not? That’s tough to prove without a smoking gun, and managerial saboteurs tend not to leave that kind of evidence lying around.

For a more rigorous test, Palacios-Huerta and his colleague Luis Garicano examined the outcomes stemming from a 1994 FIFA rule change in which three points, instead of two, were awarded in round-robin tournaments for a win. (It was an attempt to drive up soccer scores and attract U.S. fans, who presumably find the subtleties of the game far less appealing than a Pelé-style bicycle kick into the net.) In doing so, the economists found empirical evidence for the risks attendant in strong incentive plans.

By analyzing the incidence of dirty play before and after the rule change, they discovered that increasing the points awarded for a win caused a rise in sabotage on the field: fouls and unsporting behavior resulting in yellow cards increased. By analyzing the results of matches, they further determined that the rule change did not change the number of goals scored. Teams played more aggressive offense until they got their first goal, then they hunkered down defensively to protect the win. “The beautiful game became a bit less beautiful,” concludes Palacios-Huerta.

In Beautiful Game Theory, Palacios-Huerta also reports on how he used soccer to prove the long-standing efficient-markets hypothesis—a theory suggesting that in the stock market, for instance, information is processed so efficiently that “unless one knew information that others did not know, no stock should be a better buy than any other.” The problem with proving this hypothesis is that you can’t stop time to analyze the effects of a piece of news on the market. But time does stop in a soccer match.


Palacios-Huerta realized that at halftime, “the playing clock stops but the betting clock continues.” So he identified matches in which a “cusp” goal was scored just before the halftime break, and then analyzed the changes in betting odds during the break at the Betfair online betting exchange. He found that Betfair lived up to its name: “Prices impound news so rapidly and completely that it is not possible to profit from any potential price drift over the halftime interval.”

This is good news for sports bettors, but it’s far less reassuring in light of the New York Times exposé that broke on May 31. It seems that some gamblers are allegedly paying off referees to use penalty calls to rig soccer matches. Efficient or not, when it comes to economic markets, it seems like somebody always knows something that no one else knows.