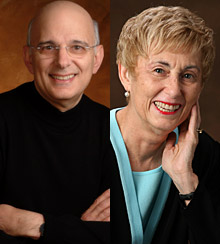 There’s an idea in Dick and Emily Axelrod’s new book, Let’s Stop Meeting Like This: Tools to Save Time and Get More Done (Berrett-Koehler, 2014), that’s sure to raise the eyebrows of managers around the world: Make meeting attendance voluntary—no strings, no reprisals. That’s right. Leave it totally up to the invitees to decide whether it’s worth their while to show up… or not.

The idea is borrowed from Eric Lindblad, a vice president at Boeing and general manager of its 747 program, who adopted voluntary meeting attendance as a feedback mechanism. He figured that if people didn’t show up for his meetings, the meetings needed to be either canceled or improved.

The Axelrods, a husband-and-wife team specializing in organizational development, wrote the book for executives whose meetings fell into the category of needing improvement. They believe that far too many of the estimated 11 million meetings held daily in the United States are mind-numbing, energy-sapping encounters during which participants are more likely to be motivated to hide from work than to get it done.

If you suspect that people might not show up to your meetings if they had a choice, read on.

S+B: Why should executives be concerned about meeting effectiveness?
DICK AXELROD: Meetings are the factory floor for knowledge workers.They are where a lot of work gets done—or should get done—these days. Organizations are getting more complex, and making them work requires people to meet. Meetings are also artifacts of the organizational culture. If you change the way you meet, you can begin to change your culture. And meetings are huge engagement opportunities. They are where people decide whether they’re going to sit on their hands or they’re going to put their wholehearted self behind whatever needs to be done.

“Meetings are the factory floor for knowledge workers.”

S+B: You liken meetings to video games in the book. How are they similar?
DICK AXELROD: During a workshop we were doing in Scotland, Colin Anderson, the CEO of Denki, a video game company, told us that the meeting principles we were teaching are the same principles that his company uses in designing its games. In order to engage people, both meetings and video games must have a clear and meaningful purpose. There has to be a challenge—kind of a sweet spot beyond your grasp, but not so far away that it’s impossible to reach. There needs to be autonomy; the players must feel like they can influence outcomes. There needs to be an opportunity to learn something. And there needs to be feedback, so you know how well you’re doing.

These five factors—purpose, challenge, autonomy, learning, and feedback—provide a way of thinking about a meeting that goes beyond the agenda and mechanics, like how you set up the room. If you can embed them in your meetings, you should have good ones.

S+B: How do you embed them?
DICK AXELROD: We use something we call the “meeting canoe” for that. It’s a six-stage process that represents the order, shape, and flow of the meeting experience. First, you welcome people and connect them to one another and the task. Then, you help them discover the way things are, and elicit their dreams about what could be. Next, you help them come to a decision about what should be done and ensure that everyone is clear about the decisions reached and who is going to do what. Finally, you attend to the end by reviewing the decisions reached, identifying next steps, and reviewing how you worked together.

EMILY AXELROD: Our graphic artist, Bob Von Elgg, came up with the canoe as a metaphor for meetings. We love the idea because a canoe requires direction and coordinated action to move through the water. And when you look at a canoe from the top, its shape is reminiscent of the meeting experience: A meeting is a conversation that starts out small in the welcome and connection stages, it reaches its widest point when you’re discovering the way things are and eliciting people’s dreams, and begins to narrow again as you decide what to do and attend to the end.

S+B: Why do we need to welcome people in a regular staff meeting?
EMILY AXELROD: A welcome can be as simple as saying, “Hi, Jane,” but it is necessary. A lot of people come into meetings thinking about other things—their kid who’s sick at home or the horrible traffic on the morning commute. A welcome brings people into the present. Also, things change between meetings, and when they do, people need a chance to reconnect.

DICK AXELROD: What we see, too, in routine meetings is that you’ve often got new people joining who are not part of the regular group, and they need to be made to feel welcome in the meeting.

S+B: Beyond introductions, you don’t seem terribly enamored with meeting icebreakers.
DICK AXELROD: Relevance is the key issue. We were asked to a lean workshop where a very nice, excited young person said, “Let’s start with ‘two truths and a lie.’” This is an icebreaker in which each person makes three statements, one of which is a lie, and everyone else tries to figure out which one is the lie. It’s fun, but what does it have to do with what we’re there for?

You need a line-of-sight connection between the purpose of the meeting and what you’re asking people to talk about. For instance, we were in a meeting at a healthcare organization in Calgary meant to address patient wait time, and we kicked it off by showing a five-minute video of various stakeholders throughout the system—doctors, patients, nurses, administrators—giving their views on the subject. Then, we asked the participants to talk about their reactions to the video. So, we were connecting them to one another and to the work of this meeting.

S+B: You recommend that leaders define the decisions to be made in meetings and who has the authority to make them before the meeting starts. Why?
DICK AXELROD: In our experience, the thing that gets people really angry is thinking that they’re part of a participative process and then finding out that the meeting leader is trying to manipulate them into a predetermined answer. This also creates a dilemma for the leader: If the group starts going in a different direction than the leader wants it to go in, then he’s in a really tough place: Either he has to pull the rug out from under the group, and say, “No, you got the wrong answer,” or he ends up with a solution that he can’t support. So it’s no-win for everybody. But if you’re clear on the decision process—and you stick to it—then people know the rules of the game and they know where to put their energy.

EMILY AXELROD: You also need to be clear about the decision to be made, and then you can’t let people take you off the rails. Once I was in a PTA committee meeting that got sidetracked for two hours discussing what color the cafeteria trays should be. The meeting leader didn’t have to cut off discussion, but she should have said, “Is this how you want to spend your time?” It’s a simple question that gives people choices and ownership.

S+B: How should we end our meetings?
DICK AXELROD: Three things need to happen: Review the decisions—because how often have you left a meeting thinking that you should do one thing, and somebody else thinks you should do another thing? Identify the next step. You don’t have to have the whole thing laid out, but everyone needs a clear understanding of what’s going to happen next. And lastly, do a quick review of the meeting itself—what worked and what didn’t work; how could you improve the meeting?

Even tragedies need their endings, so don’t let your meetings just peter out. If this is a regular meeting, how you end is your input into your next meeting. If it’s part of a change process, then how you end this time is going to affect your next change initiative.

DICK AXELROD: This is a subtle point, but the trap I see leaders get into is trying to simultaneously lead and facilitate meetings where they’ve got content input. I don’t think you necessarily have to have a professional facilitator, but I think one thing leaders can do is give the job of discussion leader to someone else in the group. Or they temporarily turn that role over at points where they’ve got some clear inputs. It’s difficult to be offering input and trying to facilitate the group’s process at the same time without seeming manipulative.

EMILY AXELROD: It’s fine for leaders to have opinions, and the group should want to hear their opinions. I certainly do. But if that’s what the meeting is all about, just let me know up front.

Topics: leaders, healthcare, stakeholders, motivation, ceo
Get s+b's award-winning newsletter delivered to your inbox. Sign up No, thanks