The Great Beanie Baby Bubble: Mass Delusion and the Dark Side of Cute 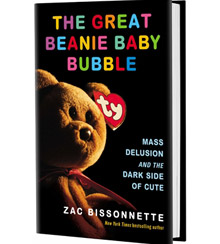 For connoisseurs of madness and madmen, Zac Bissonnette’s The Great Beanie Baby Bubble comes at an opportune time. The Beanie Babies story is 20 years old, and may well have felt lost to history if Ty Warner, the billionaire creator of Beanie Babies, had not been sentenced last year in federal court for tax evasion.

The photos of Warner, his architect glasses highlighting a face worn creepily smooth by decades of plastic surgery, have to invite some curiosity about how this reclusive, litigious man could have once been the most successful toy seller in history.

The first of these may be the more fully realized narrative. It’s tempting to see a product like the Beanie Baby and approach it in a “gee, wish I’d thought of it” way because, well, how much experience in the business does it really take to come up with the idea of stuffing loose beans in plush animals? A lot, it turns out. Warner, born in Illinois in 1944, was a second-generation plush toy salesman—probably, as Bissonnette details by going to colleagues from three decades before, the best teddy bear salesman in the U.S.

It also takes a fixation on detail that could redefine what you think of as obsessive—whether it was sending toys that didn’t precisely match the sheen of a pearl earring back to the factory in Korea or personally plucking the fur around the eyes of the stuffed animals at trade shows. The stories of Warner’s years in the stuffed-toy wilderness (an industry populated by a cutthroat mix of obsessive characters, a surprising number of whom seemed to have passed through orphanages) make for a scary lesson in entrepreneurship.

The Beanie Babies mania, a period of about three years, roughly from 1996 to 1999, takes up the second half of Bissonnette’s book. On this subject The Great Beanie Baby Bubble may be less successful. Bissonnette finds out enough about Warner’s childhood to hint at Gothic-level horrors, including a feral childhood with absent and abusive parents and the ugly rigors of military school. But it’s not clear that “the dark side of cute” really explains why this particular product generated the level of obsession it did.

Where Beanie Babies really stood out was in appealing to the collecting compulsion. Introduced in 1994, Beanie Babies took off slowly, swapped by collectors. It was two years later that they turned from a novelty item traded in the Chicago suburbs to a national craze, as Ty Inc. started “retiring” selected characters, effectively egging on collectors to bid up prices.

There is useful material here to any student of the rich literature of manias. Still very relevant now is the story of the symbiosis between eBay and the Beanie Babies mania. The two grew up together, and the auction website was instrumental in creating the market for Beanie Babies. EBay gave the market just enough transparency for potential buyers to see the mania bloom in a swirl of billowing prices—a line of 1996 election-themed Beanies, retired at the beginning of 1997, jumped in price to US$50 in two months and to $625 a year later—and not quite enough to let them see just what unstable soil it was planted in.

“Just as relatively minor discoveries of gold had fueled the gold rush of 1849,” Bissonnette writes, “it only took $500,000 per month in eBay sales to help drive, at Beanie Babies’ height, $200 million per month in retail sales.”

There may not be a precise formula here, but there is clearly something to the combination of a market that puts rising prices in bright lights and a dark sludge of hard-to-sell inventory hidden somewhere deep beneath it. Beanie Bag sellers could check at any instant just what the latest price was for a Royal Blue Elephant ($5,000 at the height of the craze). They had no way of knowing how many unpopular models were piling up in gift store basements or when Warner would gin up the market with a new batch of Beanies—much as, years later, real estate speculators watched the digits spin on housing prices without seeing the pileup of unsellable condos backed by “liars’ loans.”

One area in which it may be possible to write down a more or less accurate formula is the ratio of speculators in a mania to actual users of the object of desire. One reason Bissonnette tries so hard to plumb Ty Warner’s childhood is that Beanie Babies really were designed for children. By the end of the craze, kids had lost interest, and the market was being driven entirely by speculators squirreling away Beanies in sealed plastic.

A toy that everyone seems to be trading and nobody is playing with may be as close as we come to the definition of an investment fad. Beanie Babies caught on in suburbs and trailer parks, but were scoffed at by professional investors. And you don’t have to look far to see ostensibly more sophisticated investors doing more or less the same thing.

If you’re trying to figure out if you’re looking at an investment fad, the “Is anybody playing with it?” test can be awfully handy. Have you seen anyone buying much with a stash of Bitcoins lately?

Topics: trade, pricing, entrepreneurship, stores, writers
Get s+b's award-winning newsletter delivered to your inbox. Sign up No, thanks