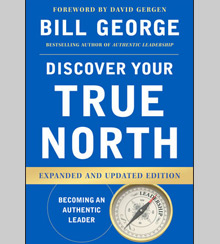 It is tempting to put Bill George’s latest book — a substantial update of a volume published in 2007 — in the same genre as those written by other formidable CEOs, such as Lee Iacocca of Chrysler, Jack Welch of General Electric, or Martha Stewart. But this book is different. That’s mainly because after serving as CEO of Medtronic from 1991 to 2001, a period during which the company’s market capitalization grew at an average annual rate of 35 percent, George became a Harvard Business School professor and taught for 10 years. Thus, he has a track record as both a corporate leader and a leadership professor.

Discover Your True North is not a book about how George led Medtronic. Although he does spend a few pages on his own time in the corporate world, the bulk of the book is about the lives of others. Lots of others. In addition to tapping into 125 interviews conducted for past books with an array of leaders, George did 47 new interviews. And from this mass of insight, George distilled what is, for him, the essence of leadership (in business, the nonprofit world, and government). He illustrates his points with examples of leaders he has known, worked with, interviewed, or helped train. The upshot: Although there are many ways to lead, George insists that only leaders who honor their own “true north” have a chance to leave a positive and enduring legacy. To follow your true north means, in essence, to lead others by mastering and sharing what is special and unique inside you, your authentic self.

Finding your true north involves three steps, which are detailed in the three parts of the book.

In Part One, George stresses how important it is for a leader to review his or her past in order to understand the significance of the leadership journey. People too easily forget, he implies, both positive and negative events that happened in their early life and relationships that were either compelling or repelling. Analyzing these is an essential first step toward better knowing oneself, especially if they help decode how one’s current behaviors as a leader evolved from these moments. The key events to dwell on, he says, are those times when someone experienced a “crucible,” a time of personal transformation caused by illness, divorce, poverty, discrimination, rejection, failure, or some other form of personal testing.

In Part Two, George explains the five areas important to a developing leader. These are being self-aware, sticking to one’s values, staying with a career sweet spot, having and utilizing a support team, and, lastly, living an integrated (balanced) life. These are the core building blocks for becoming an authentic leader. This term is, of course, central to George’s whole approach to leadership. In his introduction, he asserts, “Today authenticity is seen as the gold standard for leadership.” He shuns leadership based on charisma, imitating others’ styles, looking good, or acting on self-interest. “Nor should leadership,” he says, “be conflated with your leadership style, managerial skills, or competencies. These capabilities are very important, but they are the outward manifestation of who you are as a person. You cannot fake it to make it, because people sense intuitively whether you are genuine.”

“You cannot fake it to make it, because people sense intuitively whether you are genuine.”

In Part Three, George discusses what occurs when your unique and distinct “true north” is challenged by the real world. Since no one can lead alone, he advocates leading from a position of “we” and not “I,” and thereby avoiding any kind of lone ranger-ism. Further, he believes that what unites a team (no matter the size) is not the force of one leader but the common focus on a core purpose that rallies all to succeed. This force is strongly amplified when the leader has instilled a spirit of empowerment. “Authentic leaders focus on building personal relationships with people and empowering them to lead, each in his or her own way,” he writes. Finally, George believes that the world has become so interconnected that leaders must develop a “GQ,” or global intelligence [quotient]. To lead a workforce that is increasingly international and multicultural requires “adaptability, awareness, curiosity, empathy, alignment, collaboration, [and] integration.” And George says that one of the best ways to develop one’s GQ is to live and work in another country as soon as possible.

That is the structure of his book in a few hundred words. What fills the other 250-plus pages? To put it simply, George tells lots of stories. Every point he makes is developed by a story. In a paragraph or a few pages, George writes about someone who exemplifies the lesson he is trying to teach. The stories come fast and furious. How cyclist Lance Armstrong’s “ruthless quest for glory” poisoned his personal values and aspirations. What Starbucks founder Howard Schultz learned from his encouraging mother and his defeatist father. We read about Warren Buffett’s discovery of his sweet spot (“I don’t want to live like a king. I just want to invest.”) and his adamant refusal to abandon it. How publisher Arianna Huffington’s midlife collapse and physical breakdown triggered a desire to find a “third metric” — aside from money and power — by which to measure worldly success. We learn how South African president Nelson Mandela decided to leave behind 27 years of prison and dedicate himself solely to fulfilling the hopes of others, denying himself any desire to wreak vengeance on those who imprisoned him. And how Chade-Meng Tan’s teaching of meditation to thousands of Google employees has boosted morale at the company.

You’ll find many, many more names, organizations, and stories — so many that it was impossible for me to consume this book in my preferred single sitting. And although the volume is impressive, the faces start to blur, the incidents start to jumble, and the points of the stories start to get lost. Then again, George probably knew this might be the case and would undoubtedly recommend reading only a part of a chapter at a time. He knows that leadership development is never speedy.

“Discovering your True North is hard work. You may take you many years to find it, as was the case for me,” he notes at the beginning of the book. He closes by noting that the goal of a leader should be to “make this world a better place to live for all the people who inhabit it.” Thus, this book will be helpful for at least two kinds of people. If you’ve been feeling lost in either your leadership role or your leadership quest, consider this a new verbal compass to get you back on the right track. And if you have been living your life as a leader consumed by a unilateral desire to make more and more money without societal benefit, consider this a compendium of the lessons about leadership that you forgot to learn.