How Music Got Free: The End of an Industry, The Turn of the Century, and the Patient Zero of Piracy 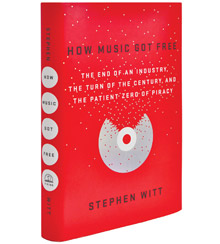 Many years ago — so long ago that the first Bush was nearing election, many college students weren’t on the Internet, and the primary technological threat to the music business was a Maxell cassette — my first band decided to self-release an album. Whereupon I made an interesting discovery. At that time, retail list prices for vinyl LPs were around US$8.98, and CDs cost almost twice that. But CDs cost far less to manufacture than LPs. And the packaging was cheaper to make, too.

This is just one reason the big music business — the few companies that make billions in revenue off live music and recorded music — is loathed by so many of its customers and participants. Unlike the other glamour businesses (read: TV and movies) that strike complex deals with creative talent and often base their pay on byzantine internal accounting, the record business was always pretty apparent in how it overcharged consumers. Further, the physical quality of its wares was often terrible. Above all, the music industry didn’t grasp that people who bought its products might, you know, have a sense of ownership once they did. Thus it reacted humorlessly, hysterically, and counterproductively to sundry threats apparent only to the industry: home tapers and even stores selling used records and CDs.

Above all, the music industry didn’t grasp that people who bought its products might, you know, have a sense of ownership once they did.

That same loathed big business, however, didn’t quite know how to respond to the underground that systematized digital piracy. In How Music Got Free, Stephen Witt skillfully and thoroughly documents this “warez” scene of file sharers that started up in the 1990s. (Witt was deep into that underground himself.) For many reasons — file size chief among them, thanks to the MP3 format — music would be the first media business radically destabilized by broadband Internet. Thus, the industry had no other prior examples from which to learn. But it nonetheless took a long time for the major labels to grasp the dimensions of the problem, and by the time they did, it was too late. An intriguing point shared by Witt: When ur-file-sharing service Napster began introducing young consumers to the idea that music could be free, Hilary Rosen, who led the Recording Industry Association of America, pushed the industry to cut a deal with Napster. She was unsuccessful.

Glover is Witt’s real find and the book’s most fascinating character. In 1999, Glover hooked up with the notorious Rabid Neurosis warez crew of online pirates, and with its mysterious leader Kali. Knowing personal details about each other was verboten in the code of the file-sharing elite; Glover knew Kali only as an online presence and a voice on the phone. Legendary among rival crews for getting rips of soon-to-be-released CDs on the Internet before all others, Rabid Neurosis — RNS — first leaked to the Internet 20,000 albums between 1996 and 2007. Glover used the oversized belt buckles then in vogue in his hometown to smuggle prerelease CDs out of his very security-conscious workplace. He was alone responsible for around 2,000 of those 20,000, including chart toppers such as Eminem, Jay Z, Li’l Wayne, and Mariah Carey. (A central irony of the book: The same consolidation of the music business that would make Doug Morris much more powerful would funnel more releases to Glover’s workplace.)

Brandenburg, an earnest engineer, is a much less vivid character than either Morris or Glover, and the story slows whenever he shows up. But once the carnage kicked off by Glover’s and RNS’s activities kicks in — and is felt even in the rarefied air of Morris’s corner suite — How Music Got Free is absolutely enthralling, and occasionally cinematic. Glover becomes a prolific movie bootlegger; his leaks are a means to gain access to new movies and video games, which he also sells on DVDs to locals. Eventually the soft-spoken rural North Carolinian tricks out a fully loaded Lincoln Navigator with $1,000 rims. We watch Morris, a wily character old-school enough to have gotten his start in the music biz not long after the Beatles played on Ed Sullivan’s show, struggle with the altogether new reality of declining sales before finally figuring out a way to make some coin off the Internet. Morris founded the ad-supported YouTube music video channel Vevo. Witt reports that the 1 billion Vevo plays of Justin Bieber’s “Baby” alone resulted in a gross of around $30 million, thanks to preroll ads.

Ultimately, Glover gets popped by the Feds in the parking lot after finishing a shift at his plant, and does three months in prison. Brandenburg makes a tidy, if unspecified, fortune from royalties associated with his invention. Morris manages to stay on top. Kali, the ringleader of the legendary RNS, aka Adil Cassim, a mild-mannered pot-smoking IT worker in suburban Los Angeles, and Alan Ellis, the Brit who ran the equally legendary (and equally illegal) digital audio archive Oink, are both found not guilty of all charges. Recorded music revenues in the U.S. fall from $14.6 billion in 2000 to less than $7 billion in 2014.

And what of music, now that it’s largely free? Witt recently told Vice that he’s optimistic, now that people pay for streaming services like Spotify. “This was a generation that was never supposed to pay for anything,” he said. Witt, an erstwhile rabid file sharer, now himself pays $140 a year for Spotify. And, judging from global live music revenues, which rose 60 percent between 2000 and 2013, there is still a premium placed on the one part of music that digital can’t replicate: the experience of performance.

As for the bands I was in — underground, aggressive punk rock, not on major labels — the Internet has given as well as taken away. When my band reunited in 2011 and 2012, in many cities we played to larger audiences than we had when we were an active band in the late 1980s. This experience was not unusual for reunited bands with any connection to the underground, even those as well known as My Bloody Valentine: The Internet had enabled new generations of fans to easily discover once hard-to-find music, and provided lots of online campfires around which the like-minded could gather.

All the same, I can’t help but wonder if the 21st-century music business is retreating to a much more innocent time. Before the Internet, before stereos, before radio, music was ubiquitous because it was just what people did. The only exchange of dollars took place at performances.