The Attention Merchants: The Epic Scramble to Get Inside Our Heads 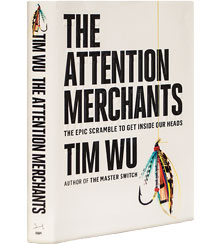 Those of us of a certain age may remember the early days of the Web, when the great debate involved whether the Internet should ever be commercialized. How naive we were! That debate was resolved in about a nanosecond.

In The Attention Merchants, a fascinating and sometimes moving history of the industries — including advertising, media, and content distribution — whose mission is to promote their clients’ products to us any way they can, Columbia University law professor Tim Wu concludes with a chilling description of what the Net has turned into since those halcyon days: “The Web, by 2015, was thoroughly overrun by commercial junk, much of it directed at the very basest of human impulses of voyeurism and titillation,” he writes. “[Its] bright spots were engulfed by the vast areas of darkness, the lands of the cajoling listicles and the celebrity nonstories, engineered for no purpose but to keep a public mindlessly clicking and sharing away, spreading the accompanying ads like a bad cold.”

Yet Wu’s history makes clear that this pattern has been repeated time and time again. From the early 19th-century penny press to the late 19th-century Parisian poster craze, from early 20th-century salesmen of patent medicines (the most famous was actually named “Snake Oil”) to broadcast media such as radio and television, commercial forces have deployed an astoundingly ingenious array of methods to push their products.

And yet at virtually every turn, Wu shows, countervailing forces have arisen. As advertisers pushed the limits with every new technology, consumers and regulators pushed back when they decided that the dishonesty of the advertisers’ claims, or the sheer ubiquity of advertising itself, had become too much. Bowing to popular demand, for instance, by the end of the 19th century, authorities in Paris had restricted the placement of posters. In the U.S., concerns about the sometimes lethal effects of patent medicines helped lead to the creation, in 1906, of the Pure Food and Drug Act, and a vast increase in deceptive advertising through the 1920s and 1930s forced the Roosevelt administration to push the so-called Tugwell Bill, which strengthened the earlier law. In response to each of these efforts, industry lobbyists pushed hard — and successfully — to water down the force of these regulations.

It is Wu’s genius not just to describe this lurid history, but to cast it in terms of the ad industry’s increasingly effective encroachment on human attention and its intrusion into how people live their lives. It used to be that certain times and places were inviolable, or at least unreachable: homes, public schools, social interactions, physical exercise. Yet the industry has succeeded in breaching every one of those walls — for example, by plastering every square inch of Parisian wall space with advertising posters; overwhelming radio and then TV with ads; offering commercial, ad-driven Internet services to public schools; and, lately, suffusing ubiquitous social media and mobile communications with marketing messages.

As fascinating, and sometimes terrifying, as this history is — see Wu’s description of Nazi “radio guard” members herding people into “listening rooms” to hear Hitler’s speeches — his description of the rise and fall of the Internet is most compelling. Wu, who is credited with coining the term net neutrality, is at home on this turf. He takes us through the first spam email (sent in 1978), the growth and democratization of celebrity culture, the commercialization of the World Wide Web, the introduction of the smartphone, and the transformation of social media into a commercial medium. It’s a compelling and sometimes amusing story. In the 1990s, when AOL’s slick new head ad salesman showed CEO Steve Case an early banner ad that would run on the service, Case remarked, “What really bothers me is the ads are in a place where members will see them.” (The ad salesman’s response is unprintable.)

One of Wu’s key insights is that “technology doesn’t follow culture so much as culture follows technology.” Radio and then television created a mass audience of eardrums and eyeballs, people who were all too willing to give up their evening hours. Networks then realized they could sell that attention to advertisers. The advent of the remote control, he argues, provided only the illusion of control. In Wu’s view, channel surfing simply puts people into a state of mind that makes them properly receptive to advertising while further attenuating their capacity to concentrate.

One of Wu’s key insights is that “technology doesn’t follow culture so much as culture follows technology.”

In transforming the broadcast model, the new technologies of the Internet have taken the capture of human attention to its logical conclusion. From morning to night, we constantly “check in,” hoping for some Skinnerian reward — an email, a text, a new post from one of a social media “friend,” perhaps the latest tweet from a celebrity we follow. Each little reward keeps people checking for more, co-opting attention and serving up ads in the process. It’s brilliant.

Is there a way out of this maze? Will there be a backlash strong enough to save users from themselves, as there was in response to earlier methods for monopolizing our attention? Wu notes that when Apple feared the proliferation of ads and other junk on the Internet threatened its products, the company allowed ad blocking software on its mobile browser. But Wu offers little hope that regulators will step in yet again to stem the tide.

Ultimately, Wu believes that it is up to us to free ourselves from the encroachments of ever more effective attention-grabbing technologies into our lives. In that regard, the growing movement to disconnect from our gadgets through “digital Sabbaths” and the like is heartening. He also hopes that people will eventually turn to subscription-based Internet services to avoid the advertising bombardment.

But it’s likely the impact of such efforts will be limited. The attention merchants always seem to find new ways to burrow into people's lives.