When: The Scientific Secrets of Perfect Timing 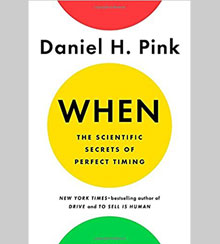 The vagaries of time can be bewildering. One day, you drive through heavy traffic as if in a perfectly choreographed dance number; the next, it feels as if you’ve entered a demolition derby. One day, you’re brimming with ideas; the next, your creativity well is as dry as Death Valley. Timing is everything, right?

Actually, no. That’s what Daniel Pink declares in the last sentence of his illuminating and often surprising new book, When: The Scientific Secrets of Perfect Timing. “I used to believe that timing is everything,” he writes. “Now I believe that everything is timing.”

What Pink means is that there are predictable oscillations present in the days of our lives, and in individual and group work, that affect the outcomes we are working toward. In When, he argues that we can improve our chances of success in work and life if we simply recognize these oscillations and use them to our advantage. This may seem akin to casting runes, but in his trademark style, Pink supports his thesis with a convincing and nuanced reading — and synthesis — of a wide variety of scientific research.

Much of the research that Pink offers stems from the application of big data and analytics. Take, for instance, the study of 26,000 earnings calls from 2,100 companies over a span of six and a half years conducted by three business professors. They discovered that the tenor of calls and their effects on stock price are related to the hour in which they are held. Calls made first thing in the morning tended to be positive. Call results declined until lunchtime, when there was a small bounce, and then declined again until after the closing bell. (What time is your next earnings call?)

Pink says that the earnings call study and many other studies cited in When demonstrate the existence of consistent daily patterns in our lives. Whether it pertains to performance, mental acuity, or emotional intelligence, roughly three-quarters of us are at our best in the morning hours, decline into the afternoon, and rebound later in the day. “Afternoons are the Bermuda Triangles of our days,” he writes.

So, the next time you find yourself idling in traffic as a tow truck clears out a wrecked car, check the time of day. It’s likely to be mid-afternoon: Pink reports that studies of traffic accidents in countries including Finland, France, Israel, the U.K., and the U.S. have found that they peak between 2 and 4 p.m.

Three-quarters of us are at our best in the morning hours, decline into the afternoon, and rebound later in the day.

When also explores the role that the beginnings, midpoints, and endings of the activities play in outcomes. For instance, midpoints have an alarm clock–like effect that can either dissipate our energy or activate it. A study of 46,000 NCAA basketball games over 10 years revealed that teams that were behind by one point at halftime were likely to win the game. “At the midpoint,” Pink tells athletes, “imagine that you’re behind — but only by a little. That will spark your motivation and maybe help you win a national championship.”

Finally, Pink takes us to work with the dabbawalas of Mumbai to illustrate the ways and means of group synchronicity — a critical element in team and organizational performance. Six days per week, roughly 5,000 dabbawalas deliver home-cooked lunches to workers throughout India’s most densely populated city. They pick up 200,000 lunches from the workers’ homes, sort, and deliver them. After the lunches are eaten, they reverse the process and return the 200,000 empty lunch containers back to the homes of each worker. The dabbawalas do this by bicycle and train without the help of digital technology. Yet they have an accuracy rate that rivals those of FedEx and UPS. This feat is achievable because the dabbawalas have a fixed pace, a strong sense of coherence, and a unifying mission — three elements that can be used to synchronize the performance of any group, according to Pink.

As in his past books, Pink doesn’t work readers too hard: He appends the practical advice and lessons of When to each chapter in a “Time Hacker’s Handbook.” For example, after Chapter 2, Pink recommends that we get through our daily Bermuda Triangle by taking the “perfect nap.” One surprising tip: Drink a cup of coffee just before your nap. Why?  Because it takes about 25 minutes for the caffeine to kick in, which happens to be the optimal length for a restorative siesta.

In his introduction to When, Pink calls out the sagging shelves of how-to books to which he himself has contributed. “Think of this book as a new genre altogether — a when-to book,” he writes. That it is.