Amid the oil fields and beachfronts of Abu Dhabi, in the United Arab Emirates (UAE), a city powered entirely by renewable energy is rapidly coming into existence. Masdar City (named after the Arabic word for source) is a planned urban environment of about 2.5 square miles (6 square kilometers) that is expected to house 40,000 residents after its completion over the next decade. 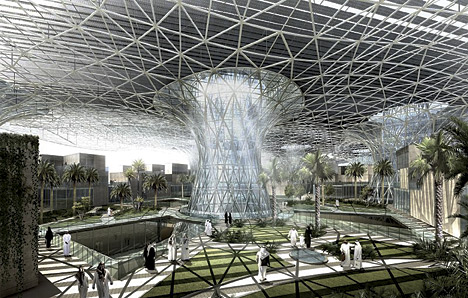 The blueprints show a city designed to sit lightly on the earth: to use recycling and energy conversion to reduce its waste to nearly nothing, and to leave a negligible footprint of carbon and other industrial emissions. Cars will be replaced by “public rapid-transportation units” — essentially, shared solar-powered vehicles that hold six people and can be directed to any one of 1,500 stations beneath the city. Parks and plazas, filled with greenery and modeled after traditional Arab gardens, will foster a sense of community and encourage walking. Narrow alleys between buildings will offer shade and reduce the need for air conditioning.

This vision of Masdar City tries to resolve a series of contradictions. It is a verdant oasis surrounded by desert; it is a proposed hub for research in renewable energy in the middle of a region plagued by talent gaps, particularly in the sciences. Perhaps most unexpectedly, it is the world’s first city to aim for zero-carbon status, in a country that depends on fossil fuels for income.

Masdar City is one element of the larger Masdar Initiative, which includes a carbon management unit dedicated to reducing greenhouse gases, a developer and operator of renewable energy utilities, an asset management arm that invests in renewable energy and clean technologies, and a new university called the Masdar Institute of Science and Technology. The Masdar Initiative is a wholly owned subsidiary of the Mubadala Development Company, which is the Abu Dhabi government’s investment arm; in 2008, the government allocated US$15 billion to Masdar. In July 2009, Abu Dhabi won the bid to sponsor the headquarters of the International Renewable Energy Agency, which will be located in Masdar City. Taken together, these initiatives indicate the magnitude of Abu Dhabi’s commitment to renewable energy and its intention to maintain its status as a world energy leader even if fossil fuels eventually cede their dominance in the global energy portfolio.

Sultan Ahmed Al Jaber, CEO of the Masdar Initiative, sat down with strategy+business in October 2009 to discuss the vision of a clean energy future as represented by this new city.

S+B: What spurred the creation of the Masdar Initiative?
AL JABER: Many people thought the founding of the Masdar Initiative in 2006 marked a fundamental shift in Abu Dhabi’s environmental policy. That’s not the case. Conservation has been part of our culture for decades, thanks to the efforts of our late president, His Highness Sheikh Zayed bin Sultan Al Nahyan. He was an environmentalist who, in many ways, was ahead of his time. For instance, in 1978 he banned gas flaring — the practice of burning off leftover natural gas on oil rigs. The World Bank, by contrast, just began its initiative to ban gas flaring in 2002.

We wanted to build on our environmental legacy. We were also looking for ways to diversify Abu Dhabi’s economy; we know oil and gas are finite resources. Creating a renewable energy sector would let us capitalize on our energy expertise and our substantial financial resources, while honoring His Highness’s vision by developing clean sources of power that have no impact on the environment.

It seemed like the obvious path, but we didn’t want to jump in unprepared. Prior to launching Masdar, we went on a four-month fact-finding mission, starting in Europe and continuing on to the U.S., Canada, South America, Asia, and North Africa. The trip was an eye-opening experience. I went into it with the perception that renewable energy was very immature. Actually, though, we found that it was mature enough, but it was fragmented. The researchers at the labs, the academicians, the businesspeople, the incubators, the entrepreneurs, the banks, the policymakers, the regulators, the government officials — they were not talking to one another. Leaders in the private sector were asking, “Why should we take the risk if we’re not being offered any guarantees by the government?” At the same time, governments were saying, “We can put the policy together, but if the private sector isn’t participating, what’s the point?”

That’s when we saw an opportunity. We could be the first in the world to build an initiative that would cover the whole value chain, encompassing research, the development of human capital, financing through VC [venture capital] funds and our own direct investments, manufacturing, and large-scale deployment. We want Abu Dhabi to be the home of renewable energy.

S+B: Could the UAE’s talent shortages, especially in the sciences, hinder these goals?
AL JABER: Today, Abu Dhabi is largely an importer and a consumer of technology. Our goal is to develop the capabilities and infrastructure that will help us to become a technology developer and exporter in a sophisticated field like renewable energy.

To that end, we established the Masdar Institute of Science and Technology. It is the world’s first graduate-level, research-driven university that is fully focused on alternative energy and sustainability. We’ve developed it in cooperation with the Massachusetts Institute of Technology; MIT’s faculty has advised us on our recruitment of faculty and administrators, the design of our curricula, and the development of joint research projects. Our admission criteria are the same as MIT’s.

Classes began in September 2009; we accepted 88 applicants out of more than 1,200. Several students are UAE nationals, which is important for us in terms of building a local talent pool. We also have research partnerships with universities around the world, and we ensure that UAE nationals are attached to those projects so that they are exposed to different approaches. Finally, we continue to work on our attraction and retention of talent from outside the region. We are really just starting to be on the radar screen of talented individuals around the world.

S+B: Will Masdar help the region be more integrated into global efforts toward sustainability?
AL JABER: Yes. Global problems require global cooperation; developing nations must be included in addressing climate change through renewable energy. However, developed nations have a greater responsibility in that regard, because they have contributed the most, as a group, to climate change. Developing nations that are just establishing their economies have to build their infrastructure; that requires technologies that currently generate carbon emissions. The best way forward is to advance the commercialization of technologies that would help reduce our carbon footprint, such as carbon capture and storage.

S+B: What leads you to think that the world is now ready for sustainability-related projects of this scale and scope?
AL JABER: I’ve seen meaningful change and a greater sense of urgency even in the time since we completed our fact-finding trip. At a United Nations meeting last fall, the secretary-general himself acknowledged that climate change, renewable energy, and energy-efficiency issues need to be high on the global agenda. Leaders from all over the world are seriously discussing their importance. I think we will begin to see a common understanding about how to move forward.

Topics: banking, economy, research, technology, design
The business insights you need to succeed. Get s+b’s best ideas delivered to your inbox twice a week.
Sign up         No, thanks