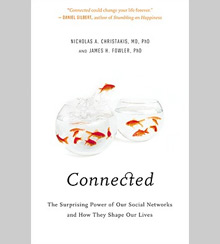 The surprising effect of social networks is that they give us less control over who we are and more control over others than we expect. So even as this excerpt from Connected, a new book by a pair of writer/professors who have studied social networks in depth, plumbs the limitations of the famous “six degrees of separation” effect, it reveals the influential power of our closer-in connections. We are who our friends say we are, and our success is as much a function of who’s around us as what’s in us. Therefore, we need to invest far more time and energy in building relationships inside and outside the workplace. Our influence over others, as the authors argue, may extend to only three degrees of separation, but that still means we have the ability to improve or worsen the condition of thousands of people. How could that idea not change the way you do business?

— Keith Ferrazzi, CEO of Ferrazzi Greenlight and author, with Tahl Raz, of Never Eat Alone and Other Secrets to Success: One Relationship at a Time (Currency Doubleday, 2005) and Who’s Got Your Back: The Breakthrough Program to Build Deep, Trusting Relationships That Create Success — and Won’t Let You Fail (Broadway Business, 2009)

Excerpt from Connected: The Surprising Power of Our
Social Networks and How They Shape Our Lives,
by Nicholas A. Christakis and James H. Fowler (Little, Brown, 2009)

Just because we are connected to everyone else by six degrees of separation does not mean that we hold sway over all of these people at any social distance away from us. Our own research has shown that the spread of influence in social networks obeys what we call the Three Degrees of Influence Rule. Every­thing we do or say tends to ripple through our network, having an impact on our friends (one degree), our friends’ friends (two degrees), and even our friends’ friends’ friends (three degrees). Our influence gradually dissipates and ceases to have a noticeable effect on people beyond the social frontier that lies at three degrees of separation.

There are three possible reasons our influence is limited. First, like little waves spreading out from a stone dropped into a still pond, the influence we have on others may eventually peter out. One way to think about this socially is that there is decay in the fidelity of information as it is transmitted, as in the child’s game of telephone.

Second, influence may decline because ties in networks do not last forever. Friends stop being friends. Neighbors move. Spouses divorce. People die. The only way to lose a direct connection to someone you know is if the tie between you disappears. But for a person three degrees removed from you, any of three ties could be cut and you would lose at least one pathway between you.

Third, evolutionary biology may play a part. Humans appear to have evolved in small groups in which everyone would have been connected to everyone else by three degrees or less. But we have not lived in large groups long enough for evolution to have favored people who can extend their influence beyond three degrees.

While this inherent limit may seem, well, limiting (who doesn’t want to rule the world?), we should remember how small the world is. If we are connected to everyone else by six degrees and we can influence them up to three degrees, then one way to think about ourselves is that each of us can reach about halfway to everyone else on the planet.

Excerpt printed with permission by Little, Brown and Company.