The Art of Action: How Leaders Close the Gaps Between Plans, Actions and Results 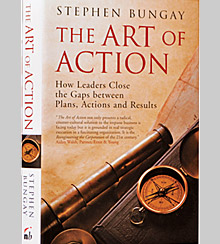 In The Art of Action: How Leaders Close the Gaps Between Plans, Actions and Results, Stephen Bungay, director of the Ashridge Strategic Management Centre in London, integrates military history and management to help us understand the essence of implementation and its challenges. Bungay, also an acclaimed military historian, begins by describing a disease endemic to large organizations — the inability to translate elegantly phrased plans into action. He identifies three symptoms: a “knowledge gap” between plans and outcomes, an “alignment gap” between plans and actions, and an “effects gap” between actions and outcomes.

Corporate leaders usually respond to these symptoms by trying to fill the gaps with more detailed information, instruction, and control, respectively. But this just makes the situation worse by hampering their employees’ ability to take effective action toward a common goal. A better cure, argues Bungay, is to address the root causes of the disease by embracing a discipline of execution.

For an understanding of the causes, the author turns to the thinking and practices of the famed German General Staff as exemplified by the writings of Carl von Clausewitz (1780–1831) and the practices of Helmuth von Moltke (1800–1891). That formidable institution, defunct since 1945, continues to inspire military establishments around the world with the sheer competence of its practitioners. From the military perspective, the root causes of the three gaps are imperfect information, faulty communication, and external factors, such as weather and accumulating complexity and risk. The solution is what the Prussians called auftragstaktik (or “mission command”), a discipline that requires the mastering of command skills by individuals at all levels, as well as the setting up of organizational processes. When this is translated to a business setting, the author calls it directed opportunism.

Practiced up and down the corporate hierarchy, directed opportunism closes the knowledge gap by issuing no command and making no plan that is more detailed than allowed by the circumstances of the commander. No distinction is made between strategy development and execution — decisions and actions coevolve. Directed opportunism closes the alignment gap by ensuring that the broad intent of commanders is conveyed as clearly as possible, while allowing subordinates to decide not whether to obey the order but how best to carry it out. Thus, the effects gap is closed by people at the appropriate levels of the organization being granted freedom of action within the bounds set by the intent. The result is a cascade of intent informed by learning at all levels of the organization, such that the emphasis of action moves from “plan and implement” to “do and adapt.”

The dynamics of directed opportunism are similar to those of the Toyota production system. For example, Bungay’s template for strategy briefings includes feedback from bottom to top, and bears some resemblance to the famed Toyota A3 report — a seven-step problem-solving process arranged on a single sheet of paper roughly 11 by 17 inches. It is less clear how directed opportunism works in a management context. The faux management sessions presented by the author, in which executives grope forward to eventually find their way, are the book’s least satisfactory sections. They suggest that the approach would have to be inculcated in staff in the same rigorous ways used by the German General Staff and Toyota.

One intellectual hurdle that the author acknowledges: If directed opportunism is to be embraced as a practice, we have to overcome a knee-jerk antipathy to the idea of command. This response is surely a legacy of our experience of authoritarian leaders whose orders went far beyond what they could know, who allowed their subordinates no discretion, and who were intolerant of feedback that even hinted that they might be wrong. More generally, this antipathy can be seen as a lack of appreciation for and acceptance of the adaptive role that the use of power can and must play in every successful organization. To overcome this, Bungay suggests that we add the function of directing to the familiar duo of leading and managing. The resulting “executive trinity” aids our understanding of what the legitimate role of power is in organizations and how it might be exercised.