Nutrition is one of five operating divisions within Nestlé Canada Inc. Recently Marilyn H. Knox took over two large Nestlé Canada initiatives, an unusual responsibility for an operating-unit leader. The first is reviewing the approach and effectiveness of marketing and sales within the retail business. The second project is a review of the company's infrastructure. 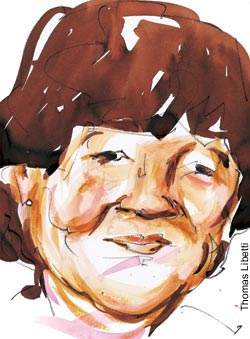 "I've been grappling with organizational change my whole career. I began as a dietitian, and my first assignment was in a hospital in Newfoundland. It was an egalitarian community with little hierarchy and no experts to tell you what to do. We dealt with very sick patients, people on kidney dialysis and so on. They would come for treatment and eat properly at the hospital, but then they would go home and eat anything they liked!

"I found that they weren't going to change their habits by my saying, 'I have a program for you.' To help them change I needed to spend time with them to appreciate the context that sustained their behavior. Only then could I get them to change. In that process I discovered how remarkable these people were. A good number of them couldn't read or write, but they had a grounded wisdom. That taught me not to make assumptions about people and to value them for who they are.

"A few years later I joined a food industry trade association. I found the same challenges I had in Newfoundland — people with very different understandings of the issues and their implications, because they come from very different contexts. Only by understanding their contexts and their goals could you hope to make changes and find solutions. I also spent four years in the provincial government as a senior civil servant. Then in 1992 I was invited to join Nestlé to handle governmental relations. Six years later I was appointed to my present position as head of the nutrition division.

"I don't like the word zealot to describe me. It implies someone bound to a particular dogma. I am just the opposite; I try to remain open and pragmatic. I understand that everyone has different starting points and pathways to get to where they want to go.

"I prefer to think of myself as a 'knitter' — knitting together people and possibilities. It's a metaphor I have shared with my people, and it seems to resonate with many of them. In knitting you have a strand of wool and can create useful garments with an infinite number of shapes and colors. Knitting uses simple portable instruments: You can knit anywhere and anytime; you can pick it up and put it down. It requires a basic routine, but there are vast variations you can create. Most often you're knitting for someone else. All the time you have an idea of what the finished piece ought to look like and slowly you see it being realized.

"Over the years I have gained greater clarity on how I do this 'knitting' and greater confidence that this is my forte. Strangely, the most recent catalyst for this understanding was the passing of my mother. In dealing with my grief and that of my father, I felt renewed clarity about my gift for connecting with people. When things get tough I get very calm so that I can think. When you get this clarity, it's as if you are knitting your own identity together with those around you. You don't worry so much about your career path. You say to yourself: 'This has to be done, and it'll make this a better place to work.' Your people sense that you're committed to the mission and not just moving up the career ladder. They respond by committing themselves and then you're all in the pattern, knitting together.

"When I took over [the sales and marketing initiative and the infrastructure initiative], I saw that the two projects needed to be knitted together. They were being run separately, with information being supplied only on a need-to-know basis. After I had an opportunity to study the projects, I asked the key people: 'Where are you going to be in a year?' I wanted to be sure I could count on them to see the project through. Then we broadened and merged the two steering committees.

"There are many ways of changing an organization. This one has begun with knitting together our basic values of respect, integrity, and courage to bring out the best of ourselves and be in charge of our destiny."

Topics: writers, authors, integrity, experts, trade
Get s+b's award-winning newsletter delivered to your inbox. Sign up No, thanks