In 1996, Genentech Inc.'s chief executive, Art Levinson, told his sales force that within seven years he expected fully half of sales to come from cancer drugs. It was a stretch for a company with not a single cancer drug to its name, but Genentech met the goal within four years, thanks to some unique assets, including a wealth of oncology research and a then-junior executive named Susan Desmond-Hellman. 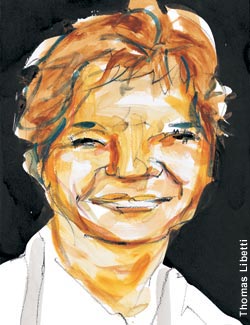 Dr. Desmond-Hellman, who today is Genentech's executive vice president of development and product operations, as well as chief medical officer, credits the company's rapid success in cancer medicines to a mixture of good science and strategic focus. "Genentech changed from being an organization that did a wide variety of things to being a company that had focus," she says. "There was a value added in Genentech's saying we're going to focus on oncology." That helped promote a new willingness to license drugs from outside the company, and prompted a recruiting strategy to attract star players in the cancer field.

Dr. Desmond-Hellman joined Genentech as a clinical scientist in 1995 from the chemotherapy giant Bristol-Myers Squibb Company, where she had been associate director of clinical cancer research and the project team leader for the drug Taxol. Although she relished her time at Bristol-Myers (the company had a long tradition in oncology), she was drawn to Genentech by the chance to work on breakthrough drugs.

As a practicing physician before she joined Bristol-Myers, Dr. Desmond-Hellman had treated patients with chemotherapy drugs. "The side effects really troubled me," she says. "You'd see a patient one week looking fine, and then the next week their hair is gone. There was a sense that perhaps Genentech had a future in oncology."

That future rested on the tantalizing but risky premise that biotechnology could treat the actual causes of cancer at the molecular level. Research had shown that certain genes are causal for cancer, and that these genes give rise to proteins on the surface of cells. Genentech proposed targeting those cancer-causing molecules with monoclonal antibodies, a kind of bioengineered protein that mimics the immune system's natural defense mechanisms.

Genentech's first drug of this type, Rituxan, was in-licensed from a smaller company, the Idec Pharmaceuticals Corporation, and received approval from the Food and Drug Administration in December 1997 for the treatment of non-Hodgkin's lymphoma. But Dr. Desmond-Hellman, who by then had advanced to senior vice president for development, said the real proof of concept came with Herceptin, a drug developed in-house by Genentech for the treatment of metastatic breast cancer.

"There was a huge amount of skepticism that you could treat a solid tumor with a monoclonal antibody,'' Dr. Desmond-Hellman says. "We got over that Holy Grail'' by showing that Herceptin alone had activity in a solid tumor. By targeting a gene implicated in the cancer with the antibody, "we took that and turned it into the tumor's Achilles' heel. We learned we could take that form of breast cancer and increase survival by 25 percent,'' she says.

Herceptin was approved by the FDA in October 1998, the first biological drug for the treatment of metastatic breast cancer. Unlike chemotherapy, which indiscriminately kills fast-multiplying cells, healthy as well as cancerous, Herceptin targets a specific genetic alteration implicated in the cancer, and thus has relatively few side effects.

Dr. Levinson credits Dr. Desmond-Hellman's swift rise through the ranks to the focus she brought to Genentech's oncology program. "Sue was very smart, dynamic, very straightforward and very early on established herself as someone who could see through problems very clearly,'' he says.

Although she is now responsible for Genentech's drug programs in heart disease, inflammation, and other areas in addition to oncology, Dr. Desmond-Hellman said her primary driver remains the same as it was when she was a practicing physician or a clinical scientist. "One thing that hasn't changed for me over the last decade is that I have this giant passion for trying to make things better for cancer patients," she says. "That's my soul rather than my job.

Topics: defense, pharmaceutical, sales, success, leaders
Get s+b's award-winning newsletter delivered to your inbox. Sign up No, thanks