Borrow: The American Way of Debt 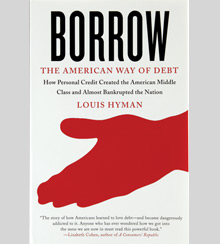 In his new book, Borrow: The American Way of Debt, Louis Hyman tracks the history of debt in the U.S. from the necessary borrowing by farmers in the early years of the republic to the wanton sale of credit since the mid-1980s, and shows how it all led to the meltdown of the financial system in 2008. Hyman’s point: The woe with which we’ve been dealing had numerous antecedents.

To cite just one, there was the trouble caused by Section 235 of the Housing Act of 1968, a lending program established by Congress in the wake of the race riots of the 1960s that was intended to make mortgages available to low-income, inner-city home buyers. The mechanics of the problem were different from those of our subprime mortgage crisis, as was the magnitude of the mess that followed, but the toxic mix of easy credit, inexperienced home buyers, profit-seeking brokers, and late-stage real estate speculation is stunningly similar to the situation four decades later. Both crises show the trouble that can result from borrowing when government fails in its role as overseer.

Hyman doesn’t subscribe to the bromide “Neither a borrower nor a lender be,” but as an assistant professor at Cornell University’s School of Industrial and Labor Relations, he is fluent in the problems that credit has created in the United States. Those early farmers, in the days when the country’s economy was primarily agricultural, needed mortgages to buy land to farm, and credit to carry them from one harvest to the next. A lack of cash forced the farmers to accept the usurious rates charged by merchants, who supplied them with equipment, clothes, and groceries in return for warehousing, transporting, and selling their crops.

Things weren’t much better in the cities, where the farmers’ children and millions of European immigrants started moving around 1900. Many second-generation Americans have heard stories about how indebtedness changed the life of a relative. Hyman’s discussion of loan sharks — and of ethnic lending circles, which often ended in disaster despite the fact that the lenders looked like the borrowers and spoke their language — places these stories in context.

The larger systemic risks of consumer credit had their origin in the 1920s, with the creation of the first financing companies, including the General Motors Acceptance Corporation (GMAC). GM started GMAC to extend credit to its dealers, and the subsidiary soon started making loans to consumers as well. To raise the capital it needed to help consumers buy cars, GMAC sold bonds to investors — a move that helped GM bypass the more conservative Ford in market share. This was the first instance of what Hyman calls “anonymous investment in anonymous borrowing,” and although it became the model on which the consumer credit industry is based, it also paved the way for a wide range of risky credit practices, including the sharp rise in U.S. credit card use in the 1980s.

Hyman doesn’t moralize about consumer credit. Consumer credit can work well, he acknowledges, during periods of job stability and rising wages. He notes that in the 25 years after World War II, U.S. residents moving to the suburbs acquired the refrigerators, televisions, cars, and homes they wanted mostly with borrowed money. They “lucked out,” Hyman writes. “Instead of ruining them, borrowing helped postwar Americans leave the ruins of the Depression far behind.” But he also notes how dangerous consumer borrowing can be, especially when financial institutions have an incentive to maximize lending and no one questions the ability of the borrower to make good on his or her commitment. Thus, the disaster of 2008.

Hyman does a better job of presenting his chronology of debt than of developing a single big idea, which may limit this book’s appeal in the executive suite. Still, Borrow should interest policymakers, not only in the U.S. but also in Europe, because so many of the problems it highlights would never have arisen if regulators had been protecting the public against an over-leveraged system. Borrow should also appeal to those executives who believe that the U.S. won’t recover its past prosperity unless it resurrects its manufacturing base. In Hyman’s view, indigenously manufactured products create good middle-class jobs and a stable economy, whereas financial innovation creates fortunes for only a few at the top and increases the risk of speculative bubbles. (See “Manufacturing’s Wake-Up Call,” by Arvind Kaushal, Thomas Mayor, and Patricia Riedl, s+b, Autumn 2011.)

Hyman hits this idea hard in the book’s final chapter, an epilogue of sorts in which he argues that “the underlying financial practices enabling the crisis remain unfixed,” and offers a blueprint for institutional reform. Because the system doesn’t do a good job of getting loans to job-creating smaller businesses, he recommends the creation of two federal agencies, one to evaluate small and midsized businesses and another to facilitate the flow of money to them through securitization. “Waiting and hoping that financiers will sort themselves out is the most serious form of delusion,” Hyman writes, asserting that the weakness of the U.S. economy will become evident once the Federal Reserve raises interest rates — which are now near zero. “We are only in the eye of the storm.”

It would be easy to poke holes in Hyman’s prescription. But his characterization of the risks we still face feels frighteningly right.