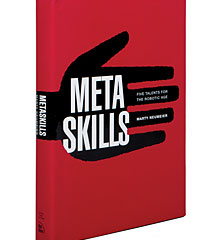 What is a human? Why do we work? What makes us happy? These are three of the 10 existential questions superimposed over the full-page photographs that Marty Neumeier chose as the opening for his new book, Metaskills: Five Talents for the Robotic Age.

Neumeier, director of transformation for brand consultancy Liquid Agency and publisher of the seminal but now-defunct design magazine Critique, thinks that this is a particularly apt time to pose such questions. Like other commentators, notably Clayton Christensen, Neumeier notes that technological advances are commoditizing work. He says that we are on a “robot curve,” in which creative work at first is skilled, then becomes merely rote, and finally, with the help of algorithms, turns robotic. This process has a socioeconomic hourglass effect: As well-paid skilled work disappears, the rich get richer, the middle class gets squeezed, and the ranks of the poor expand.

How can today’s skilled workers escape this squeeze? First, they should become design thinkers. In Neumeier’s view, traditional business thinking has only two steps: you know something, and you put that knowledge into action by doing something. Design thinking adds “making,” a crucial middle step of “imagining and prototyping solutions that weren’t on the table before.” Thus, “design can bring back value where it has been sucked completely dry by commoditization,” Neumeier says, quoting Steelcase Inc. president James Hackett.

Neumeier devotes the main body of the book to describing the metaskills, which he compares to the five fingers of the human hand. Learning is the prehensile thumb, which allows us to better grasp each of the other skills. Unfortunately, it is here that the author’s own grasp of his themes starts to slip.

There are nuggets of wisdom buried in these five core chapters. The chapter on feeling and the role that aesthetics plays in it offers fresh perspectives. The author suggests, for example, that objects and experiences can be appreciated on three levels: content, or what they are about; form, or the ways in which they are embodied; and associations, or why they matter to us. And in the chapter on dreaming, the 10 strategies for “triggering new ideas,” with their emphasis on metaphor, pictures, and paradoxes, would be helpful to any would-be creative thinker. But at times the discussion of the metaskills degenerates into a series of rather disconnected directories that are described variously as “principles,” “archetypes,” “meta-commandments,” “tests,” “strategies,” and so on. And they are mainly statements of intention or desired outcomes. We need such statements, of course, but announcing them is the easy part. What is missing is examples of the design component: the imagining and prototyping of the new approaches needed to create the outcomes.

Neumeier concludes with a call to action. “We’re not human beings; we’re human becomings,” he says. “We’re not the sum of our atoms; we’re the potential of our spirit, our vision, and our talent.” He goes on to argue that if we are to live up to this potential, we must stop “feeding our children to the factory” and sacrificing them to “the gods of mass production.” He then calls for a transformation of our education system aimed at better preparing young people for the Robotic Age. But again, he’s presenting good intentions and desirable outcomes (“shut down the factory,” “change the subjects,” and “flip the classroom”), with little appreciation of exactly how we will get from here to there.

For this reason, Metaskills works better as an aggregation of interesting ideas than as a synthesis that adds up to more than the sum of its parts. Ultimately, Neumeier’s arguments and recommendations do not do justice to his lofty themes and stirring conclusions.