I’ve been a little obsessed with robots lately. So I was particularly intrigued when I stumbled on this New Tech City podcast that promised to make me “care more about robots after listening to [it].”

In the episode, host Manoush Zomorodi explores robot morals and human ethics—a topic that’s still relatively “taboo” in robotics, according to Cornell researcher Hod Lipson. But the degree to which morality factors into robot development has significant implications for business, the government, the military, and society. And with advancements being made in the field at an increasing pace, the issue will need to be addressed sooner than later. 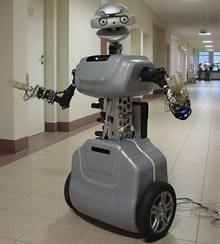 What should the guiding principles for robots be? Should they be programmed to kill the baby or save the village?

You won’t find the answers in the podcast, but Zomorodi provides interesting food for thought. She suggests that transparency will become more important, and that tech companies and governments will need to include consumers in their discussions about the ethical choices that robots can make. She says customers’ input should be incorporated before new products roll out.

Personally, I don’t have the solution to policing robot morality either, but I certainly have no qualms about the ethics of adopting a home-cleaning robot.