We worry about robots stealing jobs and leaving huge swaths of the population with nothing to do but collect universal basic income and watch Simon’s Cat videos. But some robots are going to take the jobs no person could or should do.

If a Thai soccer team gets trapped in a cave a decade from now, we’ll send a team of robots through the dangerous waters to get the boys, not a team of divers who could get hurt or killed. And if Jeff Bezos or Elon Musk ever gets around to building a space colony, they’re not going to send humans who actually have to breathe to set up the first protective structures — they’ll send autonomous robots.

We can already get a glimpse of how we can benefit when robots do inhuman work. Military instructors are employing robots to do a job you’ll never see in the help-wanted ads: running around a battle training ground, acting as targets for soldiers shooting real bullets. 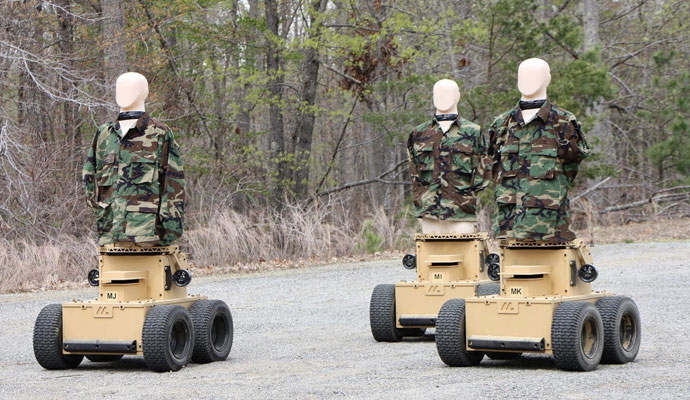 These bots were developed by an Australian company called Marathon Targets after the Australian military observed that the first time new recruits shoot live ammunition at actual hostile individuals is in combat, which is not exactly a good time to learn from mistakes. Soldiers typically train by shooting at stationary or pop-up targets, but to really prepare for battle, trainees need to know what it’s like to fire bullets at a moving, unpredictable group of people who might attack back.

So Marathon built robots driven by artificial intelligence that allows them to react like human enemy combatants. Much like autonomous cars, the target robots use light detection and ranging (lidar) sensors to “see” where they are and move in and out of buildings, or notice that a comrade robot has been shot and scurry to its rescue. Each bot has a four-wheel, all-terrain vehicle base and a bullet-absorbing mannequin on top. Hit the mannequin in a vital organ, and it falls over. Wound the bot, and it might come after you. “They’re even equipped with sound,” says Ralph Petroff, Marathon’s U.S. president. “They can yell at you in another language.”

The U.S. Marine Corps Warfighting Laboratory is experimenting with 55 of Marathon’s robots, which cost about US$125,000 each. According to the U.S. military, the accuracy of shooters improved 104 percent after two days of practice with the bots, and three and a half times more personnel could be trained in the same period using target bots compared with traditional methods.

Now Marathon is thinking about other ways robots can help soldiers, such as acting as medics that can rush into a live firefight and pull out the wounded. And in the grand tradition of military research sifting down into civilian applications, Marathon has used its technology to build a prototype bot that can navigate city sidewalks and deliver your extra-cheese, double-crust, pepperoni pizza. Think that’s frivolous? Pizza delivery guy is one of the 10 most dangerous jobs in America, according to the Bureau of Labor Statistics.

Getting shot at or hitting the city streets to deliver pizza aren’t the only jobs robots can brave for us. People don’t do well working in small spaces underground, for instance. In another military-driven effort, the Pentagon’s R&D arm, the Defense Advanced Research Projects Agency (DARPA), recently set up a Subterranean Challenge that, much like the 2005 DARPA Grand Challenge that accelerated work on autonomous vehicles, offers prize money to anyone who can develop bots that navigate unknown hazards underground to help military units or civilian first responders. If an army unit were to find an enemy tunnel system, for instance, it could send an autonomous bot down to explore. “Subterranean [work] is something we are going to have to contend with in the future. You look at the electrical systems…control systems, control grids,” Lieutenant General Robert Ashley said at the Defense One Technology Summit in June 2018. “Look at things like the tunnels along the DMZ.”

The Subterranean Challenge could lead to robots that can navigate underwater sections of caves, too, which gets us back to recent headlines about the Thai cave rescue. Divers had to get through a two-and-a-half-mile route from the exit chamber to the pocket where the boys waited. While taking supplies to the boys, one rescuer ran out of oxygen and died. If robots can get smart enough to navigate such situations and solve problems along the way, humans wouldn’t have to take those risks — or others.

Future robots might have job titles such as damaged nuclear reactor inspector, emergency room practice patient, or orbiting satellite washer. The German space agency, DLR, is already working on bots that Bezos or Musk might hire to land on Mars, look for a nice plot, and work in tandem with other autonomous bots to unpack building materials and construct a habitable outpost ready for human space travelers. When most experts imagine a Martian settlement, they see robots as the initial construction crew.

Of course, these new robots also feed speculation that we might create intelligent, mobile, social robots that learn how to band together and turn on their masters. There’s probably a good sci-fi script in the idea of the Marathon bots deciding they’ve had enough of getting shot. But in any foreseeable future, the more likely scenario is that we’ll be grateful for robots that take over jobs that can kill us. Keep that in mind when your pizza shows up in a blinking machine that asks for a tip.