Can China Lead? Reaching the Limits of Power and Growth 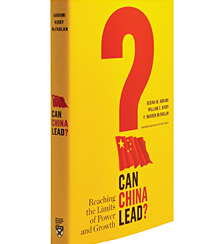 Can China lead? The provocative question posed by Regina M. Abrami, William C. Kirby, and F. Warren McFarlan in their new book should be of great interest to executives considering how to do business in a country where the ruling party is the primary instrument of economic, state, and social control. The answer offered up by the authors should be of great interest as well: Unless the Chinese Communist Party lays “sustainable foundations for economic growth and social well-being…the China ‘miracle’ as we have known it is coming to an end.”

In explaining their answer, Abrami (a political economist at Wharton) and Kirby and McFarlan (a historian and a management expert, respectively, at Harvard Business School) dispel the myths that cloud the Western view of China to reveal several challenges. “First, history matters. Chinese civilization may be more than five thousand years old, but China as a country is about a century old, and it is still building the institutions of a modern state.” Second, China is made up of many regions and ethnic groups, so “any China strategy must evolve in a nuanced way, dealing with both the local and the central.” Third, “the Party-State is omnipresent,” and dealing with it requires a long-term commitment. Fourth, the People’s Republic is what the authors call a “conquest dynasty,” founded on military power and ruled by great families. This means that it is driven, more than any other factor, by the ambition to remain in control of China’s destiny.

Against this backdrop, the authors offer a variety of practical pointers and checklists for pursuing business in China. Most of their advice has to do with understanding the influence and interests of the Chinese Communist Party (CCP) at the national, regional, and municipal levels. Government support at one or more of these levels may not guarantee business success, they assert, but hostility at any one of them will ensure failure. Some advice also harks back to China’s deeper roots, such as paying close attention to family connections and networks—a recommendation that casts a new light on the ongoing controversy around Western companies that recruit the children of China’s power elite. The task for corporate strategists is something of a tightrope walk: To do business in China, a company must associate itself with the CCP’s priorities and interests, but at the same time must hedge its bets against major political upheaval.

What could stop China from attaining a position of geopolitical and economic leadership? The authors argue that the physical infrastructure of a modern state—that is, the relatively easy “hardware” phase of China’s current development program, is a maturing effort and sorely needs to be complemented by the matching “software” of social and civil institutions. The problem, as Austrian economist and political scientist Friedrich Hayek pointed out in a different context, is that socialism’s “fatal conceit” is the idea that “man is able to shape the world around him according to his wishes.” In this sense, socialism is an engineering mind-set par excellence, which may explain why the import of the software of a modern society continues to elude the CCP: The authors characterize China as a “dictatorship of engineers.” For example, although there may be rule by law in China, there is not rule of law. And in the authors’ view, the CCP will not and cannot accept an independent judiciary. Nor will it accept a free press and a pluralistic political system.

What could stop China from attaining a position of geopolitical and economic leadership?

It comes down to trust, say the authors. The CCP does not trust China’s citizens enough to install the institutions of a modern society, and China’s citizens will never trust the CCP without them. Without mutual trust, the Chinese government cannot exercise moral leadership nationally or globally.

The likely result is foretold in the opening line of the 14th-century Chinese classic The Romance of the Three Kingdoms, which describes the turmoil and civil war between the fall of the corrupt Han empire and China’s reunification under the Jin Dynasty in AD 280. “Empires wax and wane,” wrote Luo Guanzhong, the author of the historical novel, “states cleave asunder and coalesce.” The authors of Can China Lead? cite it because it “captures the history and challenge of Chinese unity today.”