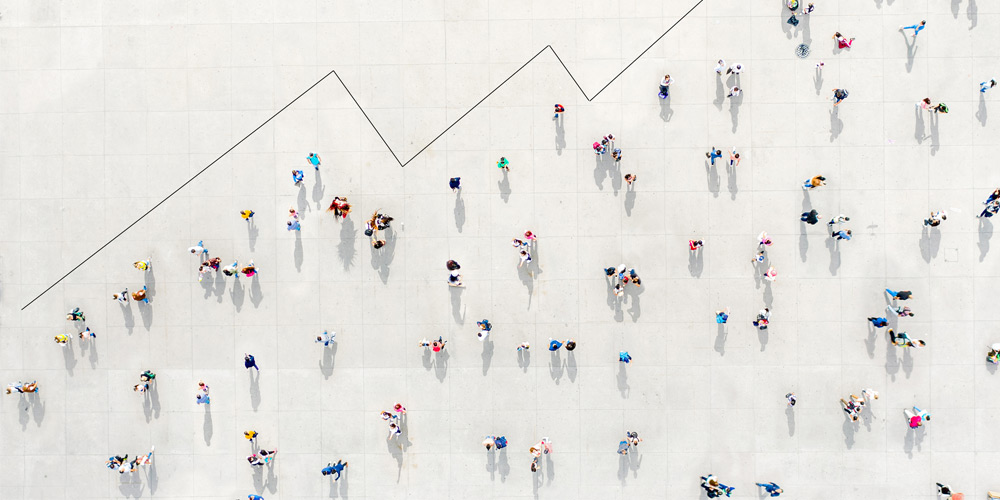 One Billion Americans: The Case for Thinking Bigger

The question of how the U.S. should respond to China’s growing economic clout has occupied policymakers for decades. The Clinton administration thought that ushering China into the World Trade Organization would force its government to work within an economic system designed by the United States. Accepting that China was showing little inclination to do so, the Obama administration then sought to strengthen the U.S.’s relations with other Asian powers. Most recently, President Donald Trump has been content to treat China as an economic rival and has tried to hobble its growth.

Journalist Matthew Yglesias, cofounder of the news site Vox, favors a different approach. He thinks the Sino–American battle for supremacy is essentially a numbers game. The U.S. has 330 million people; China has 1.4 billion. If China becomes half as rich as the U.S. on a per-person basis, its economy would be much larger. But because China won’t become smaller unless it suffers “some horrendous misfortune” or its government makes “some tragic miscalculation,” the U.S. needs to get bigger. Much bigger. The United States, he argues, should strive to triple its population. 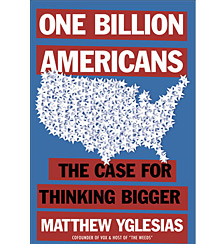 Yglesias knows this proposal, which he admits “sounds a little loopy,” will raise objections from the Left (It will accelerate climate change! What about our schools?) and the Right (America is already full!). Such protestations play into his hands, because the argument he makes in the new book One Billion Americans is less about international supremacy than about overcoming inertia in domestic policy. Adding so many new people to the U.S. would require major reform in areas where failure has become normalized: immigration, housing, education, healthcare. Yglesias’s desire to think bigger, as per his subtitle, is not just about a more populous country. It is a plea to expand the range of policy solutions.

Major population growth requires both a higher fertility rate and a more permissive approach to immigration. On the matter of the former, he notes academic research that suggests the gap between the number of children Americans want to have and the number that they do have has grown to its widest point in 40 years. Other studies indicate that the most common reasons for not having children are economic. The policies Yglesias proposes to overcome these challenges range from the straightforward (a Canada-style child benefit scheme, the overdue introduction of paid parental leave) to the more creative (a 12-month school calendar).

As for immigration, Yglesias wants us to stop thinking of it as “an act of kindness toward strangers” and instead consider its previous primary function as “a strategy for national growth and national greatness.” Of course, the United States has the room for it. Even with 1 billion people in the Lower 48, he notes, the U.S. would have a similar population density to that of France. After offering a path to citizenship for undocumented immigrants, he suggests opening the borders.

Even with 1 billion people in the Lower 48, the U.S. would have a similar population density to that of France.

Yglesias dismantles all of the obvious opposing arguments, explaining that even if some first-generation immigrants take more from the welfare state than they contribute, the balance is redressed by their children. Nor, in his accounting, does increasing the supply of labor depress wages for the majority of those already in the country. Instead, more work is done and consumers have greater choice. He concedes that there would be some losers but is content to let the already well-to-do bear the strain. Yglesias is willing to loosen the extraordinarily tight restrictions on foreign doctors so that the profession’s salaries fall but overall healthcare provision is strengthened. The red meat he offers to likely skeptics is a proposal that immigrants pay higher income taxes than natives.

Yglesias digs out plenty of absurdities in other policy areas that he believes his population-growth strategy could help the government to address. The zoning codes and rules and regulations that prevent the construction of high-density housing would need to be swept away. Current policies, which favor gas-powered personal vehicles over other forms of transportation infrastructure and render rail construction prohibitively expensive, would also be shown to be untenable.

The America that Yglesias envisages, one where it is less expensive to raise your children, where there’s a broader range of housing options in a multitude of thriving cities, and in which infrastructure is more abundant and more reliable, is a fairly clear upgrade. Yet it is curious that he does not make much of the single biggest existential reason to make America more populous: the climate. Barring some high-profile exceptions, the U.S.’s unusual emptiness and its often temperate conditions make it an ideal fit for millions of climate refugees.

This is where the framing of One Billion Americans rubs up against its contents. Yglesias doesn’t really provide calculations for how many extra people each of his proposals might draw in, or context to describe how previous attempts at driving up population growth have fared. At times, it seems as if his description of the Sino–American battle for supremacy is a sort of Trojan horse to make the political Right stop and consider his left-of-center ideas.

Yglesias is correct that in many crucial areas, U.S. domestic policy is stuck in a rut, resulting in perverse situations in which millions cannot live close to their workplaces or voluntarily reduce their carbon emissions or have the children that they want. And One Billion Americans offers some impressive big-picture thinking to broaden the minds of policymakers. But we shouldn’t need the threat of Chinese domination to consider them.