Dying for a Paycheck: How Modern Management Harms Employee Health and Company Performance — and What We Can Do About It 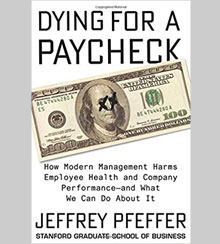 Jeffrey Pfeffer, the Thomas D. Dee II Professor of Organizational Behavior at the Stanford Graduate School of Business (GSB), hasn’t been particularly sanguine about business management for a couple of decades now — perhaps he never was. From his Machiavellian take on Power to his skepticism about leadership education, his recent books have punctured conventional wisdom and challenged executives to do better. In his brutal new book, Dying for a Paycheck, Pfeffer steps up the attack.

The book’s thesis is straightforward and blunt: American workplaces and management practices are destroying individual and organizational health. To prove it, Pfeffer partnered with GSB colleagues Joel Goh, a doctoral student (now a professor at the National University of Singapore), and Stefanos Zenios, a professor of operations, information, and technology, and surveyed a broad range of employee health and wellness research.

They identified 10 workplace exposures within the control of employers that significantly affect human health and longevity. And we’re not talking about the industrial accidents that plagued the American workforce a century ago. Rather, the exposures in the 21st century include: being laid off; not having health insurance; irregular work shifts; working more than 40 hours weekly; confronting job insecurity; facing work–life conflicts; having low control over one’s job and job environment; facing high job demands; having low levels of social support at work; and working in unfair situations.

It may seem difficult to tally the health costs related to amorphous concepts such as control over one’s job. But studies do show that people with high-level jobs, which presumably offer more control (as in, personal discretion and independence) to the job holder, are healthier than people with lower-level jobs. Pfeffer cites the Whitehall II study of British government workers conducted in the late 1980s and early 1990s, which concluded that job level was the single most important predictor of developing heart disease — more important than smoking. “After adjusting for age (because health problems and mortality generally increase as people age),” he writes, “men and women in the lower ranks had about a 50 percent higher probability of reporting chest pain and angina and men had more than twice the likelihood of having physician-diagnosed narrowing of the arteries than those of higher ranks.”

The overall cost of the 10 exposures studied by Pfeffer and his colleagues is vast. “In total, workplace environments in the United States may be responsible for 120,000-excess deaths per year,” he writes. That makes workplaces “the fifth leading cause of death — and [they] account for about [US]$180 billion in additional healthcare expenses, approximately 8 percent of the total healthcare spending.” Comparing the U.S. to 27 European countries, Pfeffer and his colleagues “estimate that about 60 thousand, or half of these deaths, and about $63 billion, or about one-third of the excess costs, might be preventable.”

“Workplace environments in the United States may be responsible for 120,000-excess deaths per year.”

Pfeffer says these figures, as well as the others in the book, are estimates based on a meta-analysis including a variety of sources, such as the General Social Survey conducted by NORC at the University of Chicago, 200 or so large-scale research studies drawn from Medline, data from the Centers for Disease Control and Prevention, and the Medical Expenditure Panel Survey conducted by the Agency for Healthcare Research and Quality at the U.S. Department of Health and Human Services. The accuracy of the statistics is hard to judge, but Pfeffer claims that if he has erred, he has erred on the conservative side.

For corporations, these are self-inflicted wounds as well: The corporate losses that derive from diminished employee engagement, increased turnover, and reduced job performance are significant. “Even as organizations of all kinds regularly permit if not encourage management practices that literally sicken and kill their employees, these same employers also suffer because toxic management practices and unhealthy workplaces do not improve organizational profitability or performance,” asserts Pfeffer.

Layoffs are widely considered an unavoidable response to economic downturn. Pfeffer concludes that they lead to increased mortality and poor health. But he also finds that the voluminous studies of the effects of layoffs on corporate performance “tells a largely, although not completely consistent, story — there is little evidence that layoffs provide benefits and much evidence that layoffs can harm the companies doing them.” In short, everybody loses when it comes to toxic workplaces and management practices.

Pfeffer sprinkles a few positive cases throughout the book. He cites companies such as Southwest Airlines, Toyota, and SAS Institute for their resistance to layoffs, and Patagonia and Aetna for progressive policies regarding healthcare insurance and work–life balance. But at the same time, Pfeffer makes it clear these companies are outliers, and he argues that most companies focus on the wrong things when it comes to employee health and well-being. He reserves special contempt for the kinds of “trinkets” being provided to workers in Silicon Valley — “sleep pods, free food, and letting people bring their dogs to work” — and the business media’s fascination with them.

Pfeffer offers recommendations for enhancing employee health and well-being in almost every chapter. But these tips are often couched in discouraging ways. For instance, employers should provide employee health insurance, but those who do will find themselves “caught in a competitive bind” as sicker workers flock to them and companies that do not offer insurance gain the advantage of lower costs. Avoiding layoffs won’t hurt corporate results, but CEOs who institute them will make more money and get bigger pay raises than those who don’t.

For all these reasons and more, Dying for a Paycheck is an important yet unrelentingly depressing book. Additionally, Pfeffer’s half-hearted solutions don’t suggest that he actually believes there is much hope that corporate leaders will adopt them en masse — or even in big enough numbers to begin to move the employee health and wellness needle. Wouldn’t it be nice to prove him wrong?